Some examples off the top of my head:

I have used foe on people who have been toxic in the past but people can change and later on I can't remember or understand why i did so.

Some people I foe purely because they are toxic team players but I don't care if they are in the lobby as long as they are not in my team.

I have used foe for people who have lagged games. But maybe later they get a better isp/router or use lan instead of wi-fi etc and they are no longer a problem. But I don't unfoe them safely as I can't remember the reason.

Essentially I'm more likely to unfoe if I could recall why I did so in the first place.

Some thoughts on possible new options, I'd love to hear everyone else's thoughts.

Could we apply severity also? I am aware of a few players by name that I avoid at all times and at all costs.

And could the date of applying one of these be stored and shown also?

Could I apply more than one of these to a player?

Hoping we could maybe implement this and it wouldn't be a lot of work for the devs.

Further thought, from here then surely the next logical step would be a built-in notification system eg if 12 seperate players flag me across 4 days and multiple games for teamkilling then I get a pop-up on login warning me to sort myself out or I could face a ban.

In chat you can give colors to players. You can develop your own systme what each color means if you need it.

In game and replay tabs you can add notes on players, so you can write down exactly what you want to remember.

This already exists in the client. It is an option when you right click on a players name

Edit: Thanks magge couldn't get a screenshot when i made my post 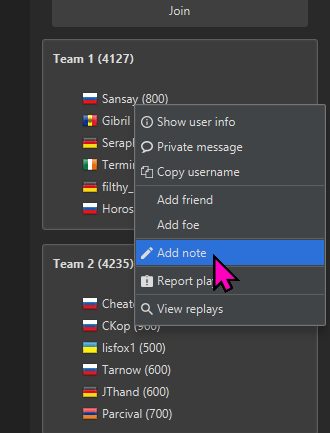 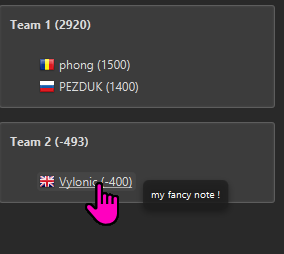 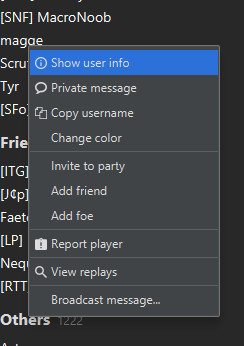 Jeez, never even knew the note option was there. But to see the note do you have to hover over the player? How do you know you have noted someone.

Still curious to see others opinions on this

As you can see on comment of @magge, there will be a line under the name, and you can see the note when you hover your mouse over the name.

This already exists in the client. It is an option when you right click on a players name

Edit: Thanks magge couldn't get a screenshot when i made my post

FFS I even checked if that was a feature, but it doesn't show up in the chat list as Jip pointed out

I still remember when the notes were added to the client, one of the best qol of life features for sure.

Thread can be safely considered solved? 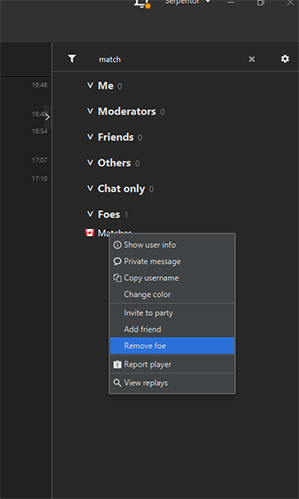 Went looking for the add note option and there wasn't one, whats going on? Are you all playing on some other client and laughing behind my back while eating donuts? i bet you are grr!

Is it just me or do the notes on players randomly delete themselves?

I make notes on players often yet I never see one.
It's as If I never wrote them in the first place.