Best posts made by Sheikah

AutoHost is a bot that I created whose sole purpose is to host games 24/7 for people to join. All games are intended to be All Welcome games so that anyone can join and be able to play without fear of being kicked due to rating or due to low game count. As part of this AutoHost games are Full Share, Optimal Balance mirrored, hosted on mapgen maps. the purpose of these settings is to try and create an environment where any player can get a game and not be punished or flamed for dying early or not knowing a map meta and additionally FullShare has seemed more conducive to games with larger rating disparities.

AutoHost Games will launch once all players slots are filled and every player is X'ed. It will notify players to X and will kick anyone who is AFK for greater than a minute when all the player slots are full.

Additionally if AutoHost does not have any players join the lobby for greater than 10 minutes then a new lobby with a new map will be created.

Feel free to join an AutoHost lobby and get playing.

Please note this is an alpha implementation which is running on my local machine and is not an official FAF bot so there may be times when AutoHost is down. Feel free to report any bugs or issues here and I can work on fixing them and implementing additional features.

posted in Blogs •
Introducing the 2022 Association Board

The FAF Association General meeting for 2022 has concluded and a new board has been elected. I would like to thank the outgoing President Sheeo and Board Members Nostalgic Futurist, Dragun101, Fury, and Swkoll for the work they have done over the past year.

I am pleased to announce the elected board for the next year:

The board and I look forward to working to improve FAF throughout the year.

The Board of the FAF Association has decided to issue the following statement after the military action launched by Russia in Ukraine:

The Board expresses its grave concern about the military action started by Russia in Ukraine. Alongside the UN, we stand united against war as well as condemn any use of military means to resolve political conflicts.

Since the 24th of February the war between Ukraine and Russia has widely impacted us as a community. On one hand we've had people dropping out of tournaments, while on the other there have been discussions about the war that, at times, spread blatant misinformation regarding the military action. As a board, we've decided to take steps to provide a safe online environment for all of our community members.

All discussions about the war between Russia and Ukraine must happen within #politics on Discord and in the IRC client chat. Any discussions or statements that are a reference to the war outside of the designated channels can be reported to the moderation team, regardless of their nature. By doing this we create an opt-in environment for those who desire it, and preserve the regular FAF experience for those who do not.

Any claim or statement in the designated channels that is not supported by the United Nations may be subject to moderation. We understand that the first casualty of war is truth and especially in the information era today this is even more the case according to experts appointed by the Human Rights Council. We consider the United Nations as our ground truth, and we will use it as our standard for moderation.

We understand that the actions of a country do not necessarily reflect the views of its citizens—therefore, we will not ban or otherwise suppress Russian members of our community over the actions of their government. That being said, with tensions so high, we ask our members to refrain from engaging in excessive political discourse.

The Board notes that the FAF Association is based in Denmark, and as a direct consequence it is not possible to transfer FAF prize funds towards Russian players. We are bound to Danish laws as they are enacted with respect to this conflict.

This topic is meant to introduce the new features and updates that are being added to the client for version v2021.10.0. As the new PRs are merged they will be added here. Please note with this release we are switching to a calendar based release versioning. As well I will try to have the beta and release candidates out for a longer period of time prior to release. The pre-release is now available at https://github.com/FAForever/downlords-faf-client/releases/tag/v2021.10.0-RC1

With Downlord's Client 1.1.9 the map generator has gained a new UI for generating maps with user specified terrain options.
In order to GENERATE and PLAY maps which utilize the UI options you MUST HAVE Downlord's Client Version 1.1.9 or higher

The following options are available as inputs to map generation:

It is also now possible to regenerate a map by using the name of the form neroxis_map_generator_(version)(seed)(options)
This can also be utilized to specify the options directly. The format for parsing the options from the map name can be found in the source.

Feel free to stop by the Map Generator Discord: https://discord.gg/XZW62UdYfm

Additionally new features have been added and are included below

As always if you have any suggestions for features of the map generator please comment in this thread.
If a generated map has issues please let me know by messaging me with the map name so that the cause can be investigated. 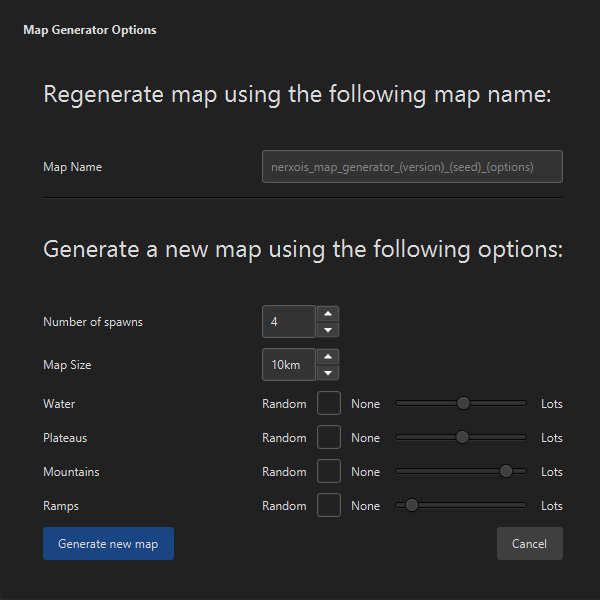 TL;DR The Council of Setons has been replaced with FAF teams of contributors who are responsible with maintaining the core aspects of FAF. Members of each team and their descriptions can be found on the wiki here FAF Teams.

During the previous General Meeting of the FAF Association, the members of the association decided to transition the maintenance of FAF away from the previously known Council of Setons into a more distributed set of teams that are each responsible for a distinct area of the FAF community. This was done to hopefully increase transparency of the inner workings of FAF as well as help to keep contributors and players engaged in the community.

Previously the Council of Setons was made up of 8 councilors: Administration, Balance, Game, DevOps, Promotions, Creative, Player, Moderation. The duties of the councilors has been split between the following 11 teams: Trainer, Community, Promotions, FAFLive, Tournament, Matchmaking, Balance, Game, Creative, Moderation, and DevOps. The members and elected leaders of each team can be found on the wiki. If you are interested to start contributing to FAF in any of the areas feel free to reach out to the members on the team for more info.

Additionally the Player Councillor position has been removed and its various responsibilities split up. The aspect of community engagement will be picked up by the newly introduced Community Manager who is elected by the general FAF player base in May.

We would like to thank all the past councilors who helped to make FAF what it is today and look forward to continuing to work with the board and new teams.

From a practical standpoint there should be no disruptions to FAF operations due to any of these changes.

This topic is meant to introduce the new features and updates that are being added to the client for version v1.4.7. As the new PRs are merged they will be added here. The pre-release is now available at https://github.com/FAForever/downlords-faf-client/releases/tag/v1.4.7-RC2

Old features in 1.4.5 that didn't have an announcment

posted in Blogs •
RE: I cri everytim

My cat killed the computer I was using to run autohost

As a quick update. I just released version 1.4.0 and this includes a major overhaul to the backend code to introduce more variation to the generated maps. The main change is that the map generator can now work on the basis of map styles.

The current map styles are DEFAULT, ONE_ISLAND, BIG_ISLANDS, SMALL_ISLANDS, CENTER_LAKE, VALLEY, DROP_PLATEAU, LITTLE_MOUNTAIN, MOUNTAIN_RANGE at the moment there is no UI element in the client to generate use these styles specifically so this is more informational. But hopefully this enables greater variety and allows it to be easier to add other styles in the future as well.

If you have ideas for styles of maps feel free to reach out to me and we can see about bringing it in to the map gen.

Now Released can be downloaded from https://github.com/FAForever/downlords-faf-client/releases/tag/v1.2.3

This topic is meant to introduce the new features and updates that are being added to the client for version v1.2.3. As the new PRs are merged they will be added here and when the release client is created for testing.

Latest posts made by Sheikah

The Community Manager Election has ended and Deribus is the official winner of the election.

We look forward to what he will do in the new position.

We thank Penguin_ for the effort he put into running.

posted in Announcements •
RE: Adaptive MatchMaking

This effectively what already happens as people and parties can queue in multiple matchmakers at once and the first match they get put into.

@jip ah yeah if the coop isn't mounting the folder properly then yeah it needs to be changed. Coop maps are not treated differently from other maps.

posted in FAF support (client and account issues) •
RE: FAF client completely unusable on VRR display due to screen flickering.

It is just FAF Client now

posted in I need help •
RE: Call for Community Manager Applications

Voting for community manager is now live at https://voting.faforever.com/vote. Note you must have 50 games in order to cast a vote

As a note there is no in-client polling at the moment that has not been added to the client yet.

posted in I need help •
RE: ★ Ethereal FAF Client Highlights ★

Probably would be good to publish