This topic has been deleted. Only users with topic management privileges can see it.
last edited by prodromos
0
P
prodromos

I am an old player, that will never really abandon FAF. But in order to play this game more often I need to get new ladder games faster, not waiting like 3-10 minutes to get a new one. This literally kills me and practically makes me avoid "team" games because I know that the situation there is light years worse in terms of finding and actually beginning a new game.

Also , through the years a ton of changes happened, first GPG, then FAF through the years of Ze_Pilot, then gradually the forced link of the game with Steam , and the inability during the previous years to install the game on a different computer and connection with the same name, means I am shown as a player that I have played only a few custom games(nowadays called ranked) and about same amount of ladder(no matter the fact that I have certainly played over 10000, about half of them 1v1); being in danger to be called out as a smurf as well. I am pretty average to low skill, but still the experience accumulated through the years means if you pit me against a new player with a "low" but same rating he/she will have an unpleasant experience. So it is very basic , the true number of our games is displayed properly which is difficult , I know.

2.1. People blaming others (can take variety of forms, including insults) for their own low performance (happens).

2.2. Some 1+ k nobody treating lower rank players with neglect and disrespect. Usually goes something like this: you have 500 - you are nothing, but I have 1000 so I am the SUPREME COMMANDER.

2.4. "GIVE ME AN ENGINEER" text marker. To who? Leads to toxic reaction, therefore toxic.

People, who should not have the right to host games, are hosting games.

One more example, because this point is THE ONE.

No "NO GRAYS" in the lobby name, grays join that lobby, they wait, they get kicked. But why they got kicked? Because some idiot host did not add "NO GRAYS" to the lobby name! Result? People are left with that special feeling of their wasted time. Real nice.

Before I proceed to this one, to remove all prejudice, my CPU Score is 264. So I know what am I writing about.

Anyway... What's a CPU Snob? Well, CPU Snobs basically are people who are obsessed with the size of other player's CPU. You can compare them to dogs sniffing other dog's rears.

So what? Well, CPU Snobs are the number one TOXICITY source in the FAF.
More details, please. Okay.

DO YOU SEE THE SHIRE AMOUNT OF SHIT THAT IS PLAGUING THE FAF?

Some will say: what can be done, people are people?
True, just leave everything as it is ;D

In the cases of CPU the FAF itself is cultivating the DISCRIMINATING atmosphere, by providing the numerical CPU Score.
But we want to play without slow people - lame ass excuse.
CPU Score is seen as some smart innovative feature, lol.
Removing it is no solution, but tweaking it in a way that it does not cultivate CPU Snobbing is the way to go, developers may think otherwise, up to them.

Now, I might have missed something, but I think it is more than enough to get a clear picture of where the FAF is at regarding casual players.

Thank you all, friends and foes, it is fun playing the current best RTS with you.

@fiercelv If I may try to help:
"GIVE ME AN ENGINEER" (or other) text markers have color on top of them, showing who made them. So you know who want engie etc.

"Rampant, unpunished lagers. REHOST 24/7 Self explanatory." And "Lobby Kicks" / "CPU Snobs". Those are two sides of the same problem. Might want to learn how to use f11 ingame, to determine who is lagging, or is it you. And what type of maps and player count your computer can handle. Smaller maps and less players and smaller unit limit of course are easyer on CPU. If necessary you can pick smaller maps, and also tell in lobby, that you have played/ you know you can handle this type of map. Lieing of course can make joining later much harder.
Also you can ask joining lobby, if your score is a problem. Some players/ greys too ask that.

You can host your own games.

And you can choose games you join. If host is bad, as you described. Remember him and dont join any more. And if host is good, remember him and join his games. Same applys to accepting toxic players in your own games. This can be quite effective way. Especially if lots of people would acknowledge theyr impact on game. I have seen bad hosts later wait for hours and never getting game full.

@FierceLV basically said matchmaking is a swamp and he would like green plains to play on instead.
@wikingest you say that if he looks hard enough there are some patches of green grass in the swamp and that you can kill the mosquitos

I basically completely gave up on the swamp that is custom games, bad start due to rating system, but it has never been appealing despite empty ladder queues at times.

What if instead of showing people's CPU scores, you instead show a warning flag if they're likely to have too low a CPU for the map in question, similar to how you get a ping warning if someone's ping goes over 500?

It'd be impossible to get a perfect measure, but I'd have thought you could still have a reasonable approximation by considering the map size, and the number of players available on the map, coming up with an approximate CPU score that you'd want to play that map late game without significant slowdown, and then showing a player's CPU score only if they exceed that level.

This way the person with the bad CPU knows by staying in the game lobby they're at risk of being kicked, while they also dont have to worry about being kicked based on their CPU if they've got a good enough CPU for the map and the host just likes going over the top with CPU scores.

An alternative would be making it a rule that you can't kick someone due to CPU/Country/Ranking/Grey status if you host an "All welcome" game (and reporting and punishing people who break the rule) but my understanding is there's already a large backlog of moderation reports so that's probably a non-starter as an option.

@maudlin27 I think the problem is being kicked, pretty unique to FAF by the way.
If a World of Warcraft (2005 era) dungeon party already accepted a paladin as healer, kicking him to take a priest is rude.

There is something to be said for people to become unkickable after a certain period say 1 minute. Saying they should expect it is like saying your personal wait time is worth less because your CPU is worth less.

@tagada said in Why would you have left FAF?:

Any news on a release date?

People will just start hosting "almost everyone welcome" or whatever. Enforcement will always be 5 steps behind actors, even when the enforcement is actually paid to do their job.

Likewise, hosting has way too many logistical problems (rehosting, changing rating halfway thru a host being up, changing the type of game, etc) to ever consider something like a time limit on kicking people reasonable. Also, I could just move you to observer, turn off observer, and launch the game getting you automatically kicked anyway.

@ftxcommando block that too then. If you make it more inconvenient, a certain number of people will no longer do it.

Really just be self regulating and when you get kicked add that host as a foe and don't join their games anymore, I e also not joined games with toxic players in them.

When a host kicks someone in a all welcome game, I leave the lobby and add them as a foe.

Spread this behavior around, I've seen it work a little bit.

Stop shitting dual gap, it can be played in various ways. Just like chess, backgammon and other old style games. Same map , same set up, each time by different tactics... If you are smart enough to understand dual then go and f*** everyone, but of course you would not do that, just because you are not smart enough

@ftxcommando said in Why would you have left FAF?:

That's a bad example as you can enforce a rating limit... If you don't then you don't care enough and mr 500 deserves to keep his place after your 6 hours.

More like I'm going to relentlessly bully the 500 so he leaves the lobby because no mod is online during burgerzone hours so I can't pm the mod to force close his game.

@FtXCommando There is literally a button enforce rating range so that people outside that range cannot join or even see your game. No bullying needed. 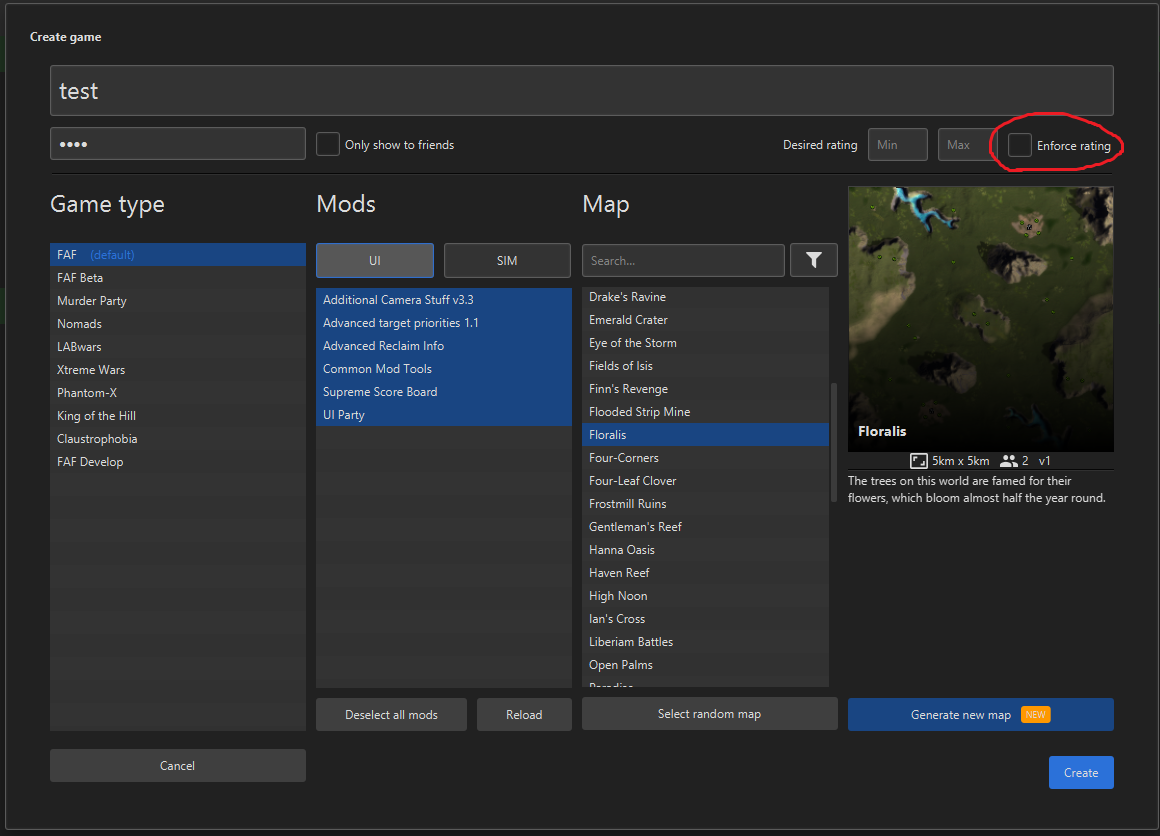 Yeah but that isn't used by tons of dudes and it still doesn't address stuff about people changing their rating minimums depending on who is online. You're harming all of FAF because of dudes disliking high deviation players and kicking them in all welcome lobbies.

All Welcome = ALL Welcome, ALL, LOL

There will be a post about TMM very soon. We are also working on adressing the greyness of the rating and trying to find the best implementation of allowing players to get some Global rating through playing TMM so that they don't get kicked from custom game lobbies. More info will come soon tm