Best posts made by jcvjcvjcvjcv

I once gave it the command to kick everyone with CPU above 20, because the 2nd 0 didn't register on my keyboard and promptly 9 players were kicked xD

I'd like to add to this topic that the benchmark being used and throttling are two different problems that would require to be solved separately.

I thought of a version of 'benchmarking' that would be a lot better: every minute throughout the sim you compare the sim rates of all the players in the game. You get a number between -1 and 1, depending if you are below, on or above average.

This is all done locally and stored similarly to how the benchmark is stored. As of writing I am not sure how that is stored - there may be a flaw there.

I think it would help best in combination with the current benchmark, which needs to be retrofitted slightly to check for memory speed because that is in fact the major bottleneck for CPU's if no throttling is happening:

From a practical point of view, @speed2 Do you know if there is a way to retrieve the information shown in the console command ren_ShowNetworkStats? It contains all the information this would require.

That would be nice. Effectively you don't only get a 'skill' rating, but also a cpu rating.

However, the only real thing that counts is people being the slowest below 0.

posted in Suggestions •
RE: Everything lags and stutters

Thermal paste degraded? The dedicated GPU is not used?

@zsombi said in Everything lags and stutters:

the only thing I'm not compromising on is running full screen

And a way to see if what is import and what you produce yourself. In half the cases where I make tele SCU's from air or eco slot, the naval player goes empty on E...

Stop the bs pls. Ppl that want to play with lag can just ignore it.

I suggested this earlier (to display CPU model) and just as now, the excuses not to do it are ridiculous.

Very simple example; ALL the Intel -U CPU's will throttle. That's simply a given because at full boost (that they use for the benchmark) can only be sustained a very short time before power delivery and heat become a problem. For ppl using laptops where the biggest task is opening a 100 page PDF this is excellent and manufacturers can skimp down on power circuits, cooling and the consumer gets a cheaper, lighter and thinner laptop. Not suited for FAF though.

Bigger games in FAF are ruined by ppl with shitty throttling systems. There should be something in place that would override the shown cpu score for these players. That includes the ppl that turn on their software streaming after running the bench, like lilSidlil.

Your argument boils down to "perfection is not easily achieved, so we should not improve".

This was the last issue on github about cpu benchmark:
https://github.com/FAForever/fa/issues/2434

This could explain why a CPU benchmark is useless in any cases
We should test memory speed.

The second link; false. CPU speed is still an issue. Thermal throttling is all over the place. Also ppl load up their CPU with things like VLC, Youtube, streaming. The existence of "fast i7's" does not mean everyone has one.

Also; the older i7's are simply too slow anyway. The cheapest current-gen Celeron (the G5900) is faster than the i7-920 for example. 2nd gen i5 is already faster than 1st gen i7.

Add; you also can't give HARMS to a teammate.

posted in Game Issues and Gameplay questions •
RE: Cybran stealthing

What often confused me was a stealthed ACU under water. It turns out that the scout/spy planes all have sonar (equal to vision radius, I think), therefore can "see" underwater and spot the ACU.

Nope. Only Cybran and Sera Spyplanes have Sonar, with range being equal to the radar range of the spyplane.

UEF and Aeon Spyplanes DO NOT have sonar, although they will still spot underwater stuff in their much smaller omni ring. 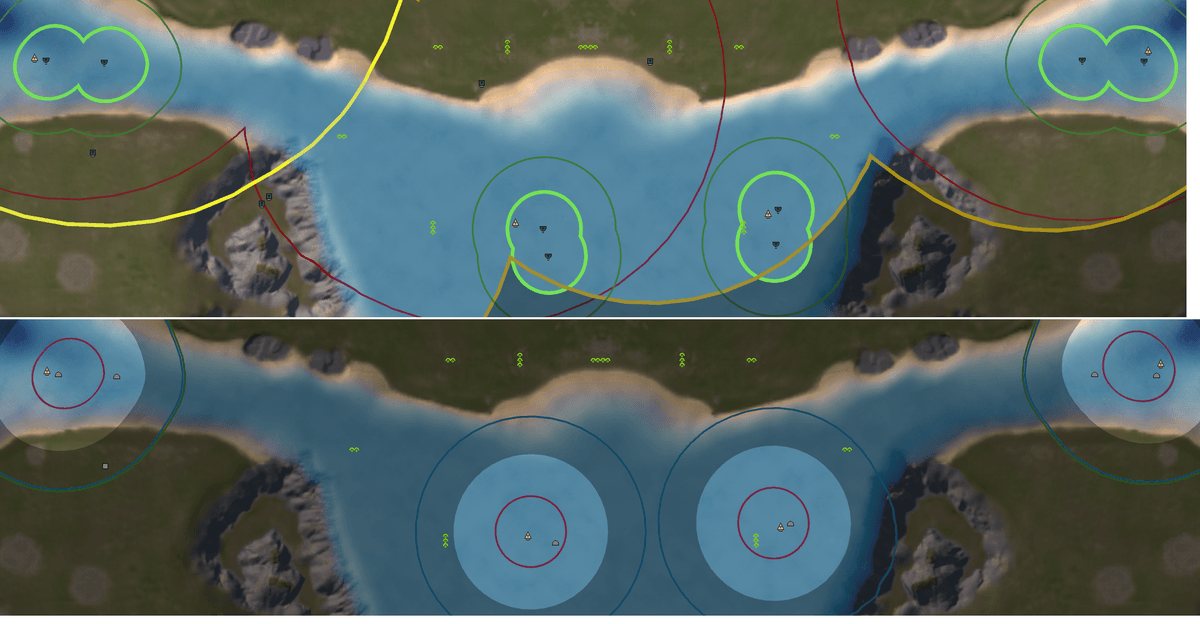 So if you are out to hunt ACU's hidden in the water outside sonar range... you better use cybran or sera spyplane or you need to fly right over them and even then their blip will appear only shortly.

Note that in both omni and sonar ring, there is still no unterwater vision.

posted in General Discussion •
RE: Shift-loading units into transports

Anything that improves transport behavior and predictability would be awesome.

posted in Suggestions •
RE: T3 omni countered by t2 stealth?

). Under omni it becomes an unidentified radar signature. Note you will be able to see footprints from cloaked ACU, so if it's walking, you can still groundattack it.

I recommend using the rings to see.

On the other hand, doesn't this open a can of worms? What about AA overkilling their targets? (Draining all SAMs on a few spyplanes and letting the bombers behind pass, etc.)

The 'can of worms' argument is also considered the 'slippery slope fallacy' - just because we fix one issue and similar issues exist, it doesn't mean that we shouldn't fix this one issue.

As Nex describes - the reason this works is because the amount of damage that TMDs do is uniform. That doesn't apply to other weaponry. Hence even if we'd want to fix this, we couldn't reliably put a 'count' on it. Let alone that it is a property of projectiles that we're using here, not a property of a weapon or unit.

I see my wording of it was poor.

Latest posts made by jcvjcvjcvjcv

RE: Delay between unit contruction for air factories..?

@jip said in Delay between unit contruction for air factories..?:

There has been a change to this, but as far as I am aware air factories were not affected.

I noted the delay too. Used to be able to spam a solid line of Torp Bombers from my build. Now they are spread apart way more and I am way way more mass when using the same amount of BP on the factory.

posted in General Discussion •
RE: Delay between unit contruction for air factories..?

@fichom said in Delay between unit contruction for air factories..?:

What worries me though, is the delay between a factory finishing it's upgrade and starting working on new units. I sometimes feel like it somehow gets stuck, and you have to wait for an extended period of time before it starts making units from the queue. And sometimes, though rarely, and I'm not 100% but pretty sure, if you queue a unit in that post-upgrade blackout, the unit gets immediately de-queued and you have to press for it again (assuming the queue after the upgrade was empty).

Only with units in queue. Not when the upgrade finishes and you THEN order the first unit.

posted in General Discussion •
RE: How to setup/use two monitors with the game?

Yeah, don't use full screen, use windowed mode. There is supposedly a mod that removes the top bar of the window too.

If you have two identical resultion monitors, you can 'split' the view and just stretch the monitor across two screens.

I have used fullscreen dual monitor, with the actual set-up in the game for a while, but it's just not stable making you loose all epic long-lasting games because the stuff freezes. I now just use one 30" 2560x1600 monitor with the game in windowed mode.

The other monitors have my discord, FAF client, Outlook... anything really.

posted in General Discussion •
RE: No Veterancy Coalition

Vet already got nerfed long ago. It also got based on mass value killed instead of # of units killed.

posted in General Discussion •
RE: How to turn off chat completely?

Play single player if you want no chat.

posted in I need help •
RE: Ban less and more

Great, problem is as Gieb said the moderation manpower is two sticks and a rock.

So what does your good intention policy intended to guess whether people are actually upset lead to? Dudes combing through replays to find something to ban people they already have a problem with due to other circumstances. Is that more or less toxic than the current situation?

UPC? You on coax internet? That stuff is known for inconsistent ping.

@nooby Part 1/2 for the new CPU Benchmark is already in progress. in the last game update in your prefs file it has been gathering data on how well the cpu performance and once enough data is gathered this will replace the current cpu benchmark to give a more realised cpu score. the more you play the more the result will be realistic and the cpu benchmark button will be removed as it is done automatically.

Nice. But how will it work exactly? I tend to keep some Youtube (example) on the side as long as MY simspeed is >0. So you might see it going down toward 0 very fast, but when the game drags on... I kill any background use and still remain >0.