This topic has been deleted. Only users with topic management privileges can see it.
last edited by
0
Z
ZLO

The Cheat and Build multipliers will be left at the default 2.0,
unless specifically set in the options section of each game map.

Right now we have 2 set options for Every game:*
1- Full share
2- Auto generate markers always
*Any other options will be marked with a yellow 'dot' on the map.

Make sure all 4 mods are loaded for every game,
as the AI mods work integrally together with markers and such.

Yes, I believed it replaced the mod - "Quality of Performance."
It cuts down on the number of particles produced on certain effects to help keep PC's from slowing down as much.

I suppose you refer to cancer games. I know signups are closed but I am up to sub as well (probably subbing for a sub then).

I know signups are closed but I am up to sub as well (probably subbing for a sub then).

There are multiple players who have asked to be put on the standby list since the draft period has ended.

ie: A 1640 rated player drops out and needs replacement -
the team captain can choose an 1800 player from the standby list or
a player rated 1639 or lower from the restricted list.

Ah, didn't see your restriction about the higher rating thing. I still think it leaves the door open for abuse in the form of someone clearly overrated signing up only to forfeit and then getting your pick of a particularly good 1800/1900.

Sub could not be higher rated then the person who drops,,
so to get a 2100 , a 2105+ would have to drop
That Protects from such devious nous

The cause for the desynchs was discovered and fixed in the last patch.
-Fix: Changing the path calculation for c-engine to early was causing desyncs in replays.

The Draft is now over and the Teams have been selected.
Congratulations to all who were selected.

The 17 players who were not selected are now in the Stand By pool,
and
if any team is Not able to field 3 Players to play....
Before or during Day 1 or Day 2 of the tournament.

ANY player in the Stand By pool can be chosen as a substitute.

Players in Stand By:
Be prepared for an early call up, and
be ready on the Tournament Days, for any last minute No Shows. 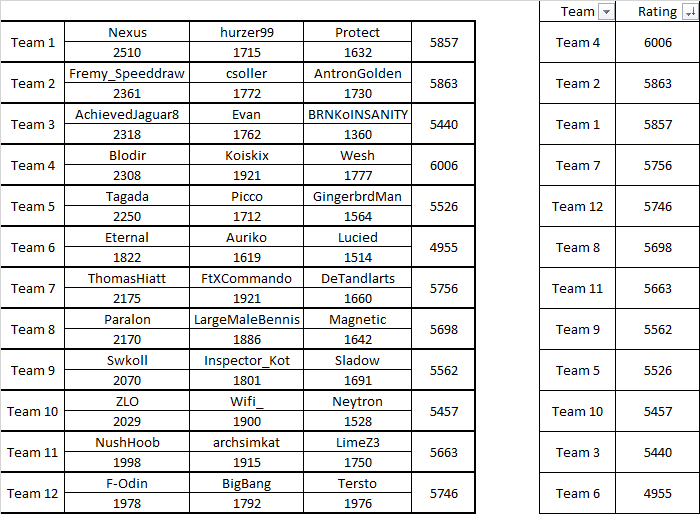 @Mize
Remove me from Stand by status

The AI developement teams are working very hard to polish their AI before the tournament.
and-

2 new updates have been released in the last couple of days:
AI-Swarm and
RNGAI

Be sure to update versions before the Tournament.
I will post again if any more updates are released.

AND...
I would like to give special thanks to the AI developement teams.
Azraeel, Uveso, Relentless and muchstuff have been following the maps closely,
and giving me advice and tips.. Thanks guys.

To learn more about RNGAI, read some info here:
https://forums.faforever.com/viewtopic.php?f=88&t=19149

JaggedAppliance will be live streaming the event here:
https://www.twitch.tv/faflive
Jan 30 & Feb 6 at 1500 UTC

Here is how the Maps for the Finals will be chosen:
I wanted a surprise map for finals game 1,
and
I didn't want to make the HUGE decision for the last 2 maps that will decide the whole Tournament.
So, I want to leave that to the Players.

This is the idea that I have come up with that should be fair to both teams.

Finals
Match 22 > Game 1
Finals - Game 1 Map - Will be a surprise,
released "Shortly" before launch.
Training and Preparation got you here,
Playing on the fly will win this one!
.
Finals
Match 22 > Games 2 & 3
Games 2 and 3 maps will be chosen by the Captains as follows:
Each Captain will send list of 8 map numbers, from the map pool to veto.
The remaining maps will be vetoed 1 at a time until 3 maps are left,
and then high seed Captain will pick "Odds or Evens"
The winner of the "Odds or Evens" roll, will then choose the map
to play for Game 2.
Odds or Evens will be decided on Aeolus by using the command - !roll -.
If a game 3 is needed, the other Captain,
will choose one of the remaining 2 maps to play.
(the 3rd remaining map will be used if a Tie Break is needed.)