Best posts made by ZLO

RE: Did you know?

•When you build something, game remembers that and does not let you build in that place anymore.
(for example you could use cheats to teleport building away, but as long as building is not dead, game will not let you build in that place)
•When you upgraide any building, old building gets removed and replaced with new upgraided building. And while this happens, game forgets that that old 1rst building was build. New building that was spawned on top does not get the same treatment as newly build one and there is no extra mechanism to prevent building
•Usually players can't order to build buildings on existing buildings, but AIs can, sometimes they block their upgraided factories by placing stuff inside factories. 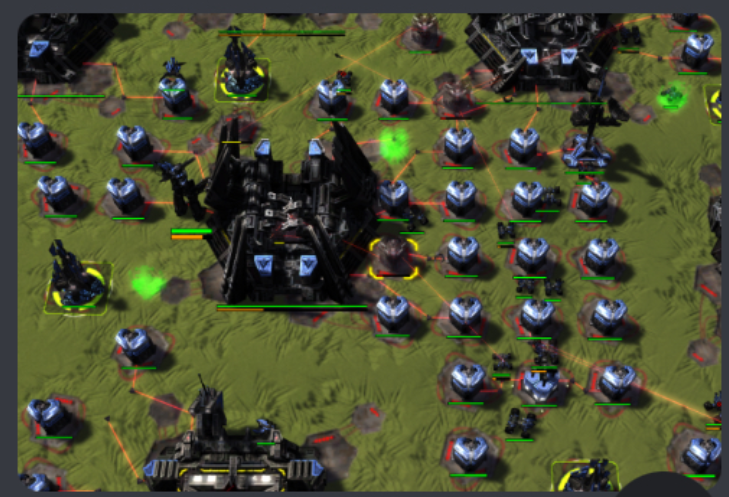 Players can use "repair" hotkey on a building's wreck to give order, even if wreck is on top of other building. however it should not interfere with model of that building... not sure how that works, but you can't just build things inside other thing, but there is lots of empty space around factories where you can build
•you can do some cool weird stuff with that
IT WAS ALL DONE WITHOUT CHEATS, i didn't teleport things inside other things, i actually build it this way, and it can be reapeated with cheats off. 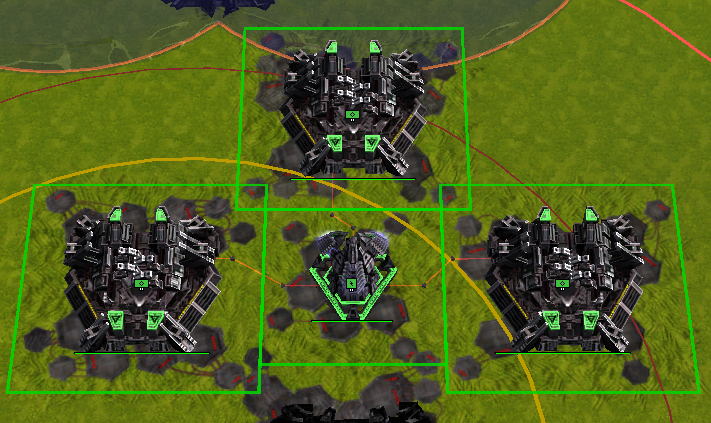 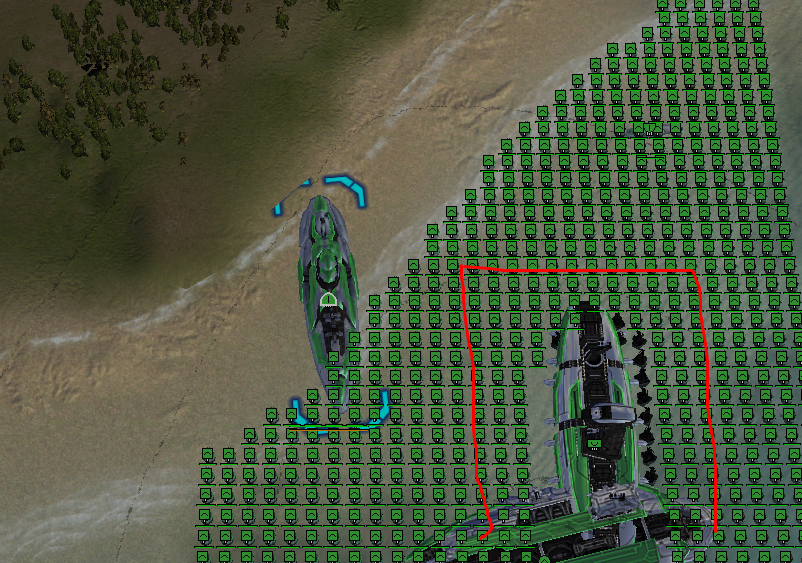 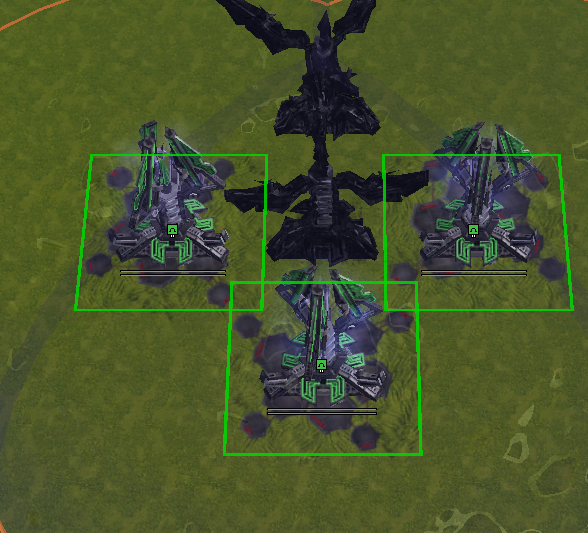 •That is only the beginning tho!
I found out that it is often not consistent.
Sometimes i can fit storage in the corner of the factory, and sometimes i don't 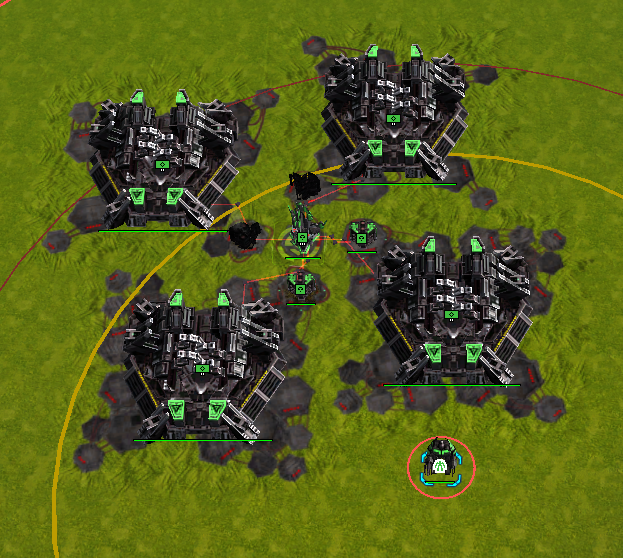 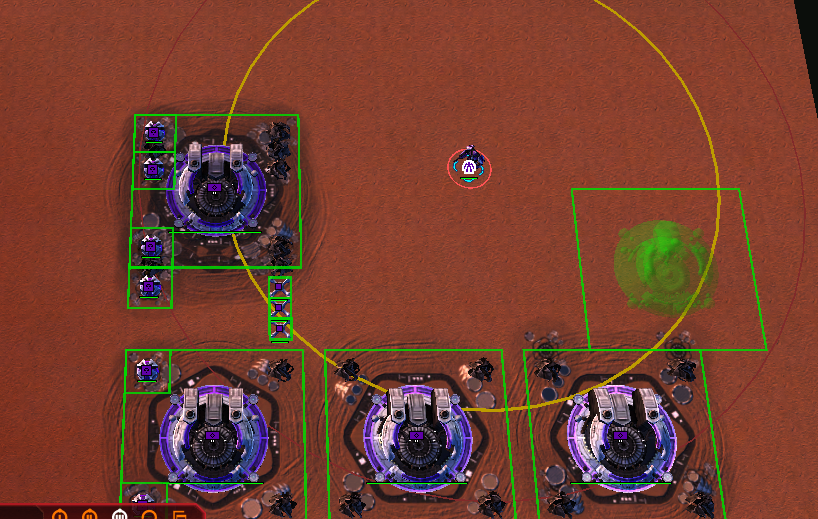 However if all factores are placed next to each other in a grid - then they all are acting similar, in a way that you can build storage in the same corner (i just didn't build all of them on this creenshot, but only 2 storages on the left are buildable for those factories) 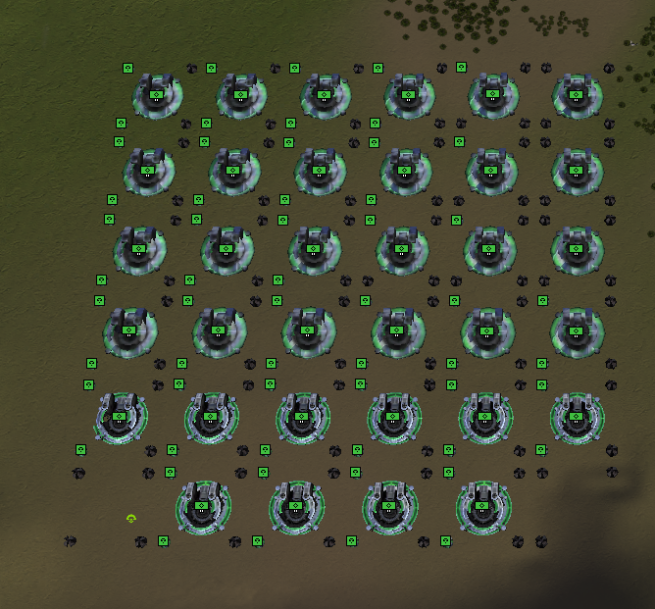 •So i have been testing that for long time but im gonna skip all the failed test attempts... here is test that reavealed the mistery
•Making a big grid of dead t1 AAs 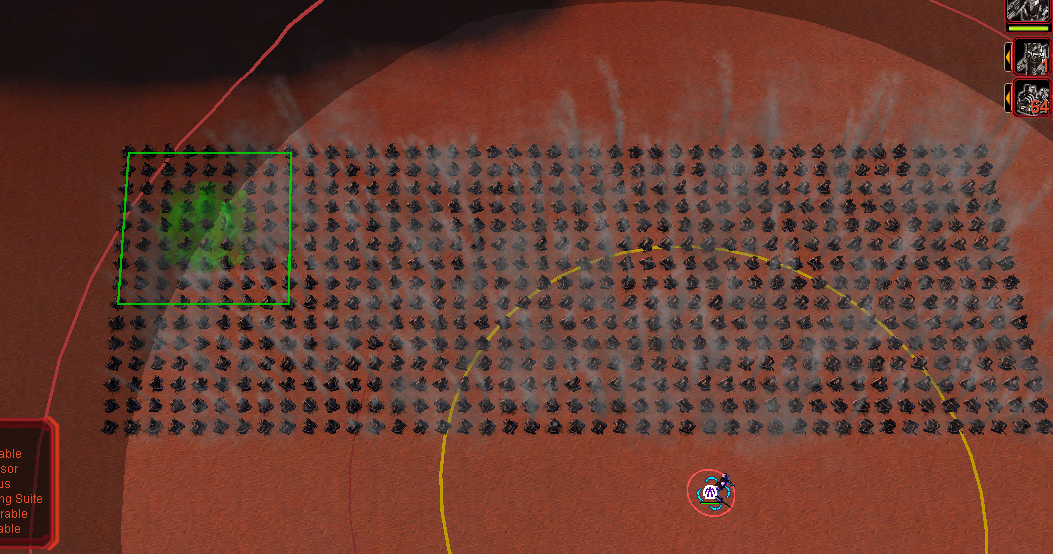 •1rst test susbject coordinates 0x0 (mesured in pds with 0 at the top left pd xD), 2 layer of pds are buildable on the left, 1 layer at the bottom 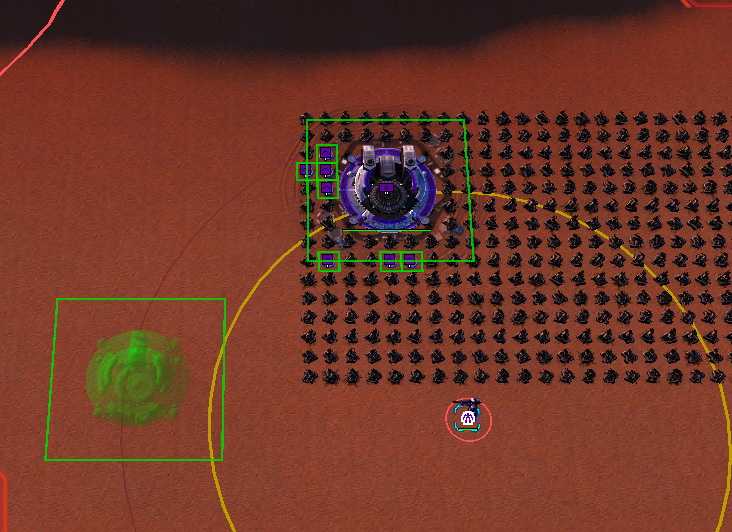 •second subj, coords 0x1, 2 layers at the left, 1 layer at the bottom but only partually... weird actually 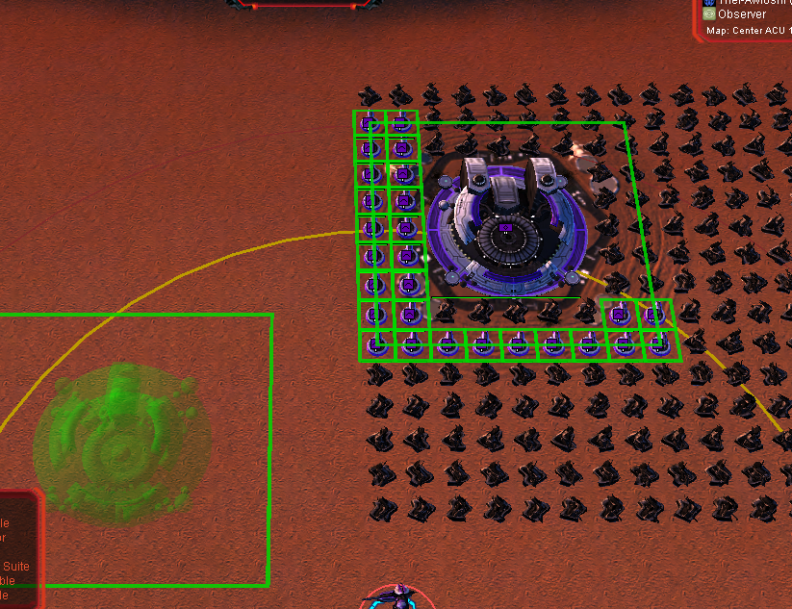 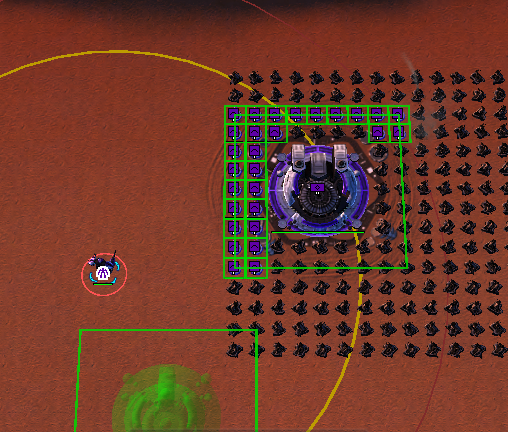 •4th, 0x3. weird that those two pds were not buildable now 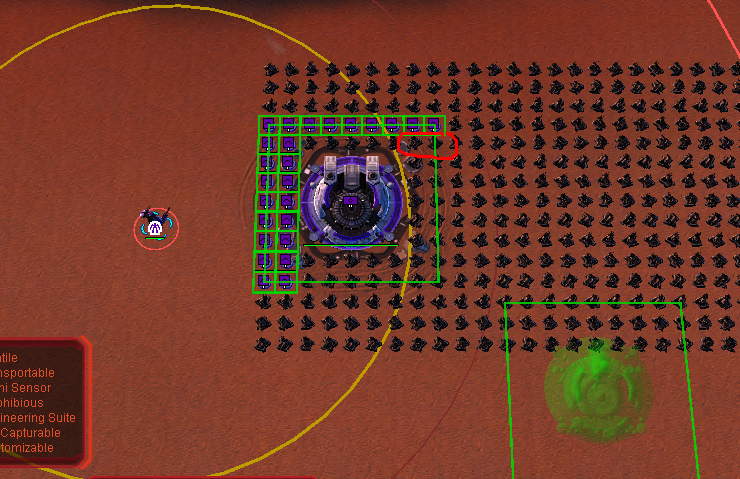 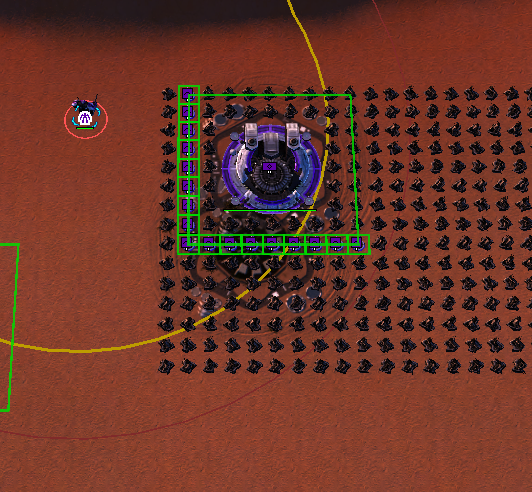 After that it was clear that factory's position on invisible grid affects your ability to rebuild things inside of it, witch was kinda werid...
also it repeats itself at least once in avery factory lenght i think... didn't check that for sure, and didn't check if it repeats itself more often... maybe like every 2 1 pgens or so maybe possible.

not many uses for that i guess, can probably try to fit storages and factories next to mexes, but need to know beforehand if you can do that with certain mexes or not. The fact that id depends on position kinda makes things simpler. also makes things insanely more fun for people that would try to recreate what you are doing but not placing things exactly in the same place LOL.

maybe you could fit more shields in the same area and fit tele-defence in the same area at the same time but it requires you to build things and then ctrl+k them and then build on top of them without reclaiming and then upgraide what you have build and then rebuild from wrecks.. not easy, and not cheap 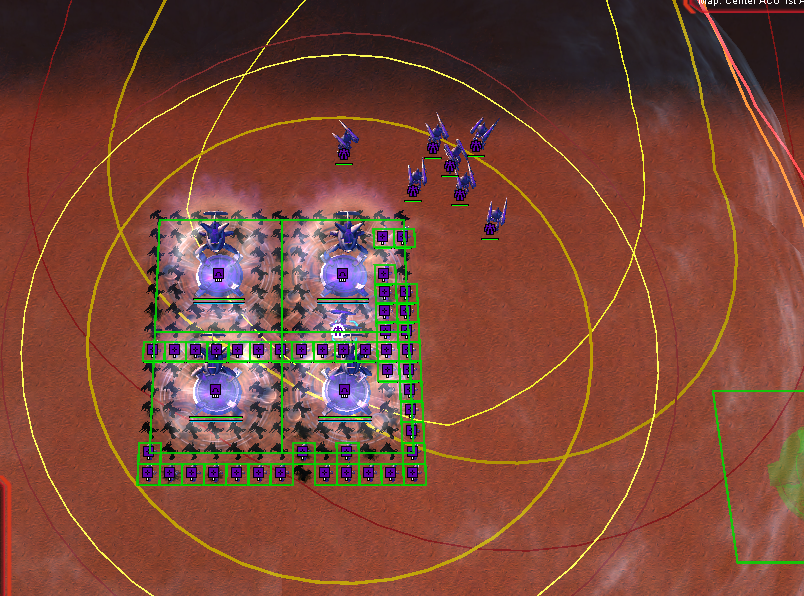 Edit: Testing was hard not only for me https://youtu.be/NhIr38iKFac that poor SACU lost its mind

Aeon TMD projectiles (those spheres that they shoot up) also divert mercy shots, however TMD will not launch it's sphere when it sees mercy shot so you need your opponent to launch missiles at you while also trying to mercy you

posted in General Discussion •
RE: FAF Lite, Supcom but simpler

remove power drain from mass extractor, so stalling power does not kill your mass income

posted in Modding & Tools •
RE: The Last Thread about RAS SACU Balance

some long time ago someone suggested making gateway unassistable

completely removing them will make some people angry i beleave

posted in Balance Discussion •
RE: What am I playing supcom for?

because i am resonably good at it and i like being good at something... also i like the controlls, new UI mods improve things, tho i am so lazy to set them up and set up hotkeys...
I like to invent new strategies, and not sure that everything has been tryed already. even small balance changes can help with that. I did brutalize some players with aeon ghetto or restorer + airstaging creep.

sometimes like one in a 100 games you get to have some bizzare epic games, or at least something cool happens and i like this stuff too. And i mean epic games more in a sence of constant action and back and forward stuff...

i kinda miss basetrades, it feels like they no longer happen at all

it takes 3.2 sec to reclaim aeon lab
2.8 for cybran
2.4 for UEF
1.6 for selen
however 1rst 0.2 second engineer spends to unpack his "arm" and aim(tested on uef enginner)
then after all HP has expired it actually needs extra 0.1 second to actually kill the unit. If that does not happen, unit will be alive with 0 HP

one fullly upgraided t3 hive will deal 219 DPS to a GC by reclaiming it
20 Fully upgraided hives can capture a monkeylord for about 9.2 seconds

From what i know ALL units can only shoot KINDA in sync with game ticks.
I mean that game engine can only wait whole amount of ticks between shots, no fractional amount of ticks possible.
For example t1 PD (according to blueprint) shoots 3 times a second, 50 damage per shot
with some easy calculations we get 3 * 50 = 150 DPS...
If you look in unit DB now you will see that it sais 166 DPS. But it only was "fixed" in databasy relatively recently.
The thing is that if you want to shoot 3 times per second you would need to shoot every 0.333333s

and i honestly have no idea how this actually works but in my mind i imagine engine reading blueprint and calculating
"i need to wait 0.33333 after that shot, okay waiting 0.3 seconds" and it does that after every shot
afaik it is not rounding, fractional part of the number just get trown away, cause that what computers do.
can check that if you look at a pillar, pillar is supposed to wait 1.25 second between every shot, but THATS ILLIGAL for engine and it just trows away numbers that are to small for him to comprehend, and pillar is shooting every 1.2 seconds

posted in General Discussion •
RE: Helpful links for learning how to improve at FAF

https://www.youtube.com/playlist?list=PLIwKk1Z5BqbwN9QgYjoY2YUvtpOgIeOlr if you can't find tutorial on certain topic... here is playlist of all tutorials i have found (probably not exactly all tutorials but probably most of them)
Most of them are outdated tho, many are on russian.

Latest posts made by ZLO

posted in Tournaments •
RE: Tell me your Shard stories!

keep in mind that shards were buffed.

Edit:
also not 100% sure but also running away from torpedos
dodjing almost any projectile
Edit2:
Even if you don't manage to completely run away from torpedos, you still greatly prolong time before unit dies and usually at that time torps are right above your aa boats... tho they still kinda don't feel that great against t2 torp bombers, tho you really need to take unit costs in account if you want to understand how good they are

posted in General Discussion •
RE: How Sacrifice REALLY works.

Engineers have 0.6 sacrifice efficiency multiplyer
sacus have 0.9
that means that thier maximum theoretical efficiency will be 0.6 and 0.9

Edit:
However if you sacrifice on something that costs 180 mass and 90 power then you will have 90% mass efficiency and 45% power efficiency witch is kinda acceptable.

posted in General Discussion •
RE: Seriously when are you guys going to undo the Scathis changes

So cybran should not have a game-ender experimental?

If there is a problem with putting big rocks because it gives mass to fast can try wrecks, wrecks take twice more time to reclaim.. it is still insanely fast but still.

posted in Mapping •
RE: cpu-upgrade results in cpu-rating in FAF down

CPU test is sencetive to memory latency witch is probably higher on ryzen, and ryzen 1700 is only like 10% better single core performance than i7 2600...
cpu rating of 233 is indeed lower than expected, should be more like 200 afaik. But it can show this much due to powersaving. Like when FAF tryes to mesure CPU performance your CPU might not boost to maximum ghz, cause it does not think that this is an important task for you.
Things you can try (one at a time or combine any of those options):

posted in I need help •
RE: Time to become more friendly to new people as a game

will tourney still happen? is there enough teams?