This topic has been deleted. Only users with topic management privileges can see it.
last edited by CheeseBerry
0

I continue to be confused:

But the issue is in the roll off point, not where the unit spawns. It is too close to the naval factory.

The roll off points are already solved and are part of the patch that is released today.

So, if I understand correctly, the first stop is/was moving the roll of points further away from the factory, and you have already patched that in.

Now you want to ensure that the factories are actually placed far enough apart that said further out roll of points are not intersecting with another factory by increasing the skirt size?

My first hunch is that this would create more problem than it solves, but everything else you have implemented so far was great, so I'd say just put it on faf dev so I can change my mind

We could also only apply a vertical stretch, but not a horizontal stretch. 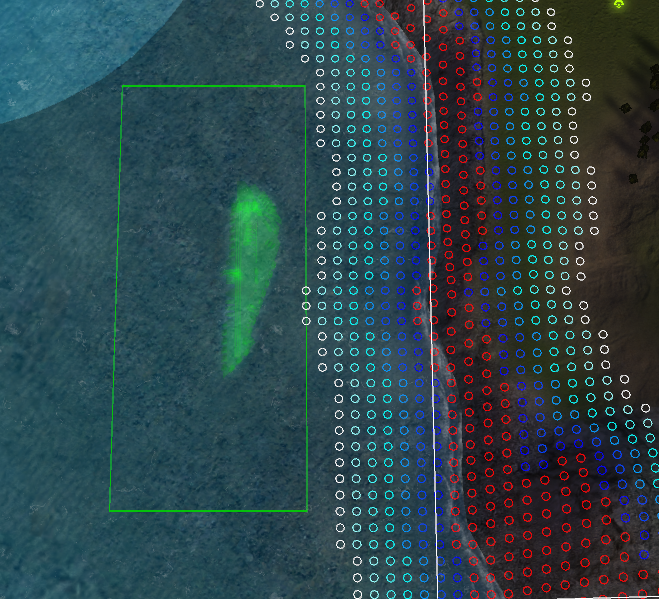 That allows them to be cliff buildable in the majority of cases as we have right now, but still encourages people to space them out more.

Wouldn't it also make sense to only stretch the skirt in the direction of the roll off point instead of symmetrically? This would make it impossible to place your factories so, that the ships would have to go into a cliff to leave the factory.
But it's still strange, as naval factories aren't symmetric, one side of the map will have an advantage in an up/down split map, because you'd have to place your factory much farther from the cliff on one side of the map, than on the other.

Wouldn't it also make sense to only stretch the skirt in the direction of the roll off point instead of symmetrically?

Roll off point is determined on where your rally point is, it can be either at the top or to the bottom of the naval factory. Hence it is symmetrical.

But it's still strange, as naval factories aren't symmetric, one side of the map will have an advantage in an up/down split map, because you'd have to place your factory much farther from the cliff on one side of the map, than on the other.

At the moment the horizontal distance has not been changed - what you see here (the green build skirt, not the circles - that is something else) is (horizontally) the same as it is right now.

Another possible solution: How about adjusting the behavior for dragging a line of naval factories so that they are spaced apart farther than they are currently, while not forbidding the placement of individual factories to be as close as they are now.

A similar, albeit much more conservative, version of this already exists in the base game where horizontally dragged lines of factories are spread apart farther than they need to be, presumably for pathing reasons: 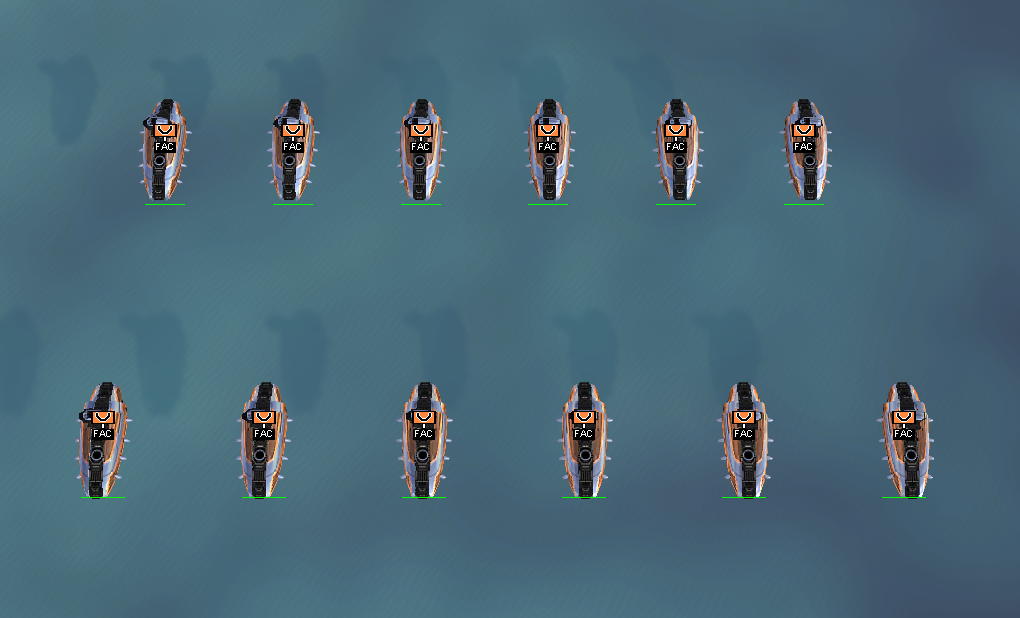 Roll off point is determined on where your rally point is, it can be either at the top or to the bottom of the naval factory. Hence it is symmetrical.

oh didn't know that, i thought ships are always made facing the same direction.
i had that problem, when i placed factories over a cliff to the north, then the ships would still start facing south and would path into the cliff and turn there and crash with the factory etc. But i just tested it and they mirror. I must have been stupid somehow

i went through the replay and factories assisting other, seem to only lazily copy their rally point 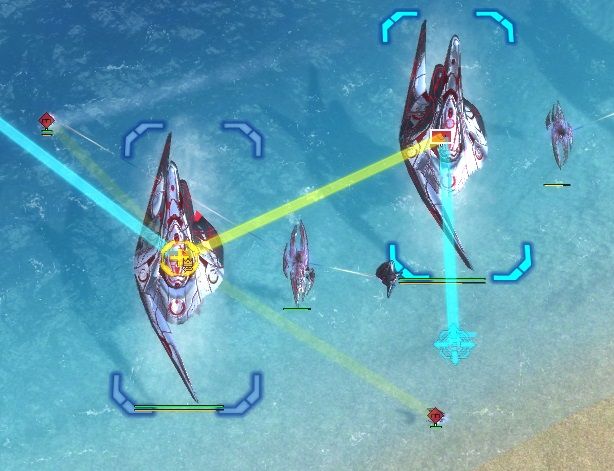 The right factory calculates the roll of point from it's own rally point, though it uses that of the other fac, so the frig comes out drives into the shore and the has to turn.

At the moment the horizontal distance has not been changed - what you see here (the green build skirt, not the circles - that is something else) is (horizontally) the same as it is right now.

yeah i thought like vertically if one team has the top side and the other has the bottom, but if they are symmetrical(top/down) it doesn't matter

@nex said in Adjust the build skirt of naval factories:

i went through the replay and factories assisting other, seem to only lazily copy their rally point

Yep, I noticed this particular issue too. That is a bug, one that I will fix for the next release

Maybe a hotkey to rotate factories/structures before building 90-180

I understand that solution - but it isn't supported by this engine.

not without introducing a 2nd unit
As i understand it, you would need to have a different Unit for each possible rotation, which clumps up the UI.

We could also make a t1 only support factory, which has the same size as the current one with closer roll off point. So you could still spam t1 facs, which aren't oversized.

@jip maybe a joining of ideas, you mentioned adding another factory with it being rotated differently.

Maybe somehow, i dont know how, but is it possible to have those factories hidden from the engineer build list, but upon selecting a factory to build you could scroll through those rotated factories without them being in the list, technically being a different unit but not noticably.

so instead of actually rotating a unit when you have the green blueprint, you actually selecting a different unit, like scrolling though templates.

@caliber I think the problems with introducing (many) new units, like different rotations are:

So i think if at all, only a minimal amount of units should be added. for example a 180 degree rotation, for building across cliffs or a smaller t1 only version, to allow spamming t1 factories, without taking up too much space.

With the vertical only size increase @Jip suggested, i think both are more or less unneeded, as it will only affect horizontal cliffs, to a degree, where you shouldn't build a naval factory there anyway, as the units would have problems to leave and when spamming factories you mostly just draw a horizontal line, which will take the same amount of space as the current factories.

The best option (in terms of possible usages, not ui) would be to have a factory, that only has one roll of point and only secures space for that. But that would need a 180° rotated version or somehow detect, that if one side is occupied your not allowed to build on the other as well. I mean would be cool, but probably also hard to do.

Having rotatable factories or different set rotations doesn't solve the problem because anyone smart enough to rotate the factory would already be aware of the potential path finding issues anyway, and thus would already have spaced out the factories. Enlarging the build skirts, making factory placement faction dependent is also unacceptable in my opinion. This path finding issue doesn't seem very important to me, and I'm pretty sure nobody is quitting the game over it. I don't understand the sentiment that modern games do things better. In my experience, video games are at an all time high in terms of bugs and unplayability, plus there are currently no real competitors for FAF's niche.

why wouldn't you still try fixing an existing problem though?

Fixing the problem isnt the cause of concern. Negative side effects because of the fix are

@thomashiatt rotatable factories would be a fix for the fix.
So a factory with a larger build skirt, that has more rotations, to compensate for faction dependency.
But i believe the different placement possibilities for different factions are mostly a concern when making the build skirt larger in all directions, as the seraphim naval factory is horizontally mirrored (space for ships is on the right not on the left) So the building itself is placed differently inside the build skirt. I think vertically they are all the same, so this change shouldn't give one faction a noticable advantage.

I wouldn't try to fix it since the proposed solutions are very undesirable or require a fundamental change the way placing structures work, which seems unwarranted for a minor issue, and will likely introduce more bugs or negative side effects. The trend with all the patches lately is to provide some minor performance improvement or small fixes that come with some weird gameplay consequences or new buggy UI options enabled by default.

If you wanna get more new players remove SteamLink. If you wanna fix something, ladder is still fundamentally broken because you can abuse the draw bug. I don't care about anything, I just like complaining on the forum, I don't even play the game. All work done on FAF is futile because it will inevitably be replaced by a new and better game, or break because the engine is old and closed source. You can't make big improvements without engine source, and can't make money without owning the IP. Put your efforts into something for the future instead of the past, or keep making little patches and we can all keep complaining to the bitter end.

I've done too much thinking and I don't wish to reread this thread.

Was there a reason that we can make the whole factory pathable like how the center is on the qg?

@veteranashe That's not the heart of the problem.
And making the whole factory pathable would look weird and I'm not sure what other things will be affected by this (can it be hit, when it's pathable?).
the true problem is, that the roll off point (where ships go after they're build) is in a spot outside the build skirt, so there is no guarantee that there is enough space at the roll off point.
So the problem is not only naval factories being in the way, but also all other water buildings and terrain.