This topic has been deleted. Only users with topic management privileges can see it.
last edited by DDDX
5
D
DDDX

Greetings.
New version (v157) of my map and mod is out.
DDDX_RPG_Survival is the map
Survival Mayhem&BO balance is the mod.

First a quick intro for those who do not know it - it's a heavily modded survival, so that it provides Total Mayhem, Blackops, and custom units in waves, minibosses (for both attackers and defenders) as well as a random end boss fight, a player 7 spot that, if chosen, is allied with the attackers and plays against the defending team, various mission goals throughout the game, and a very strong evolving upgradeable hero type role for whomever picks Player_1 as their spot in the lobby.

The map/mod requires Total Mayhem, Blackops:Unleashed, and several other mods to function - it is NOT a standalone mod and cannot function without those, but relies heavily on units and models inside those mods, and serves also to promote these awesome mods (with approval of Uveso). 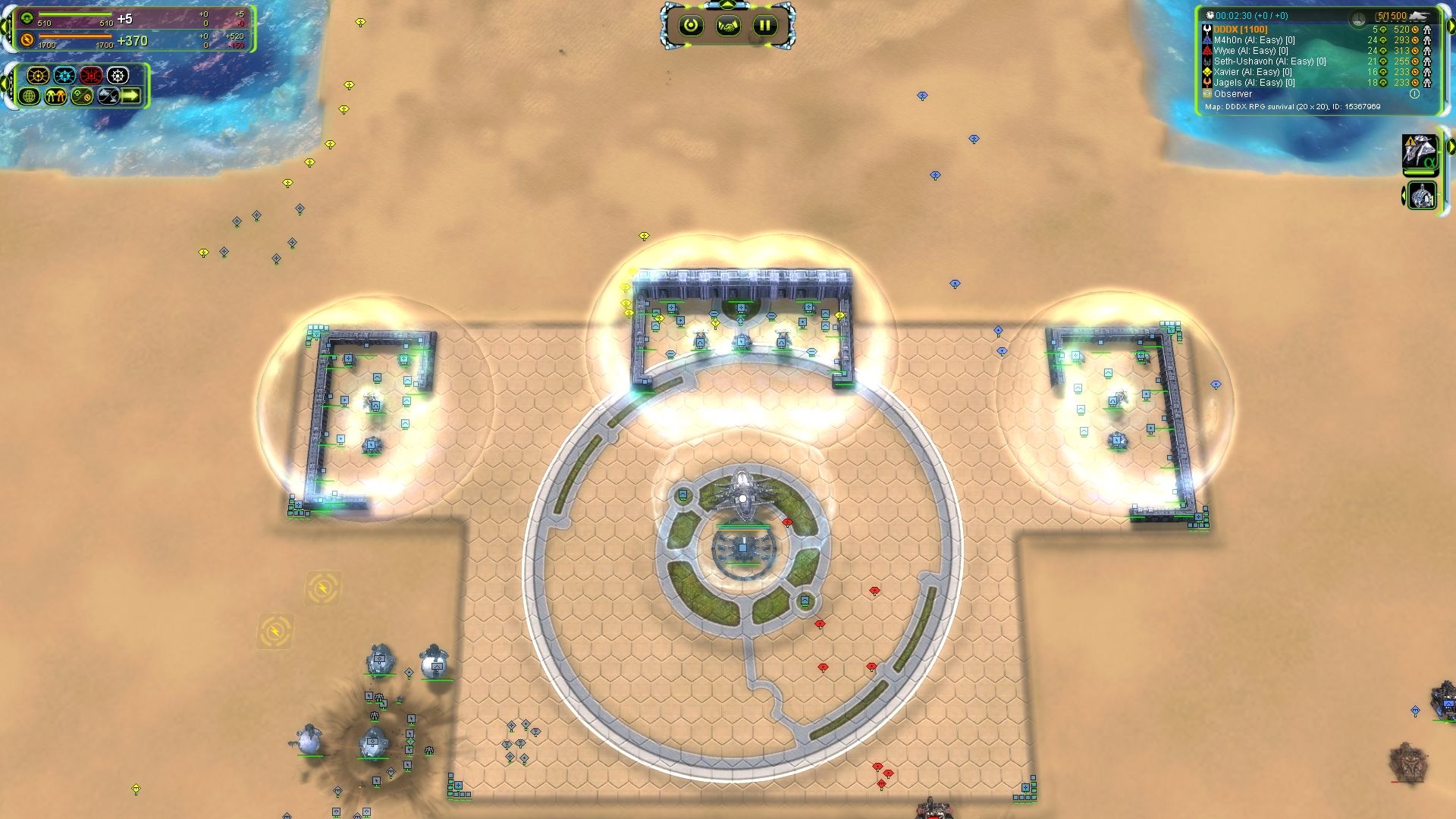 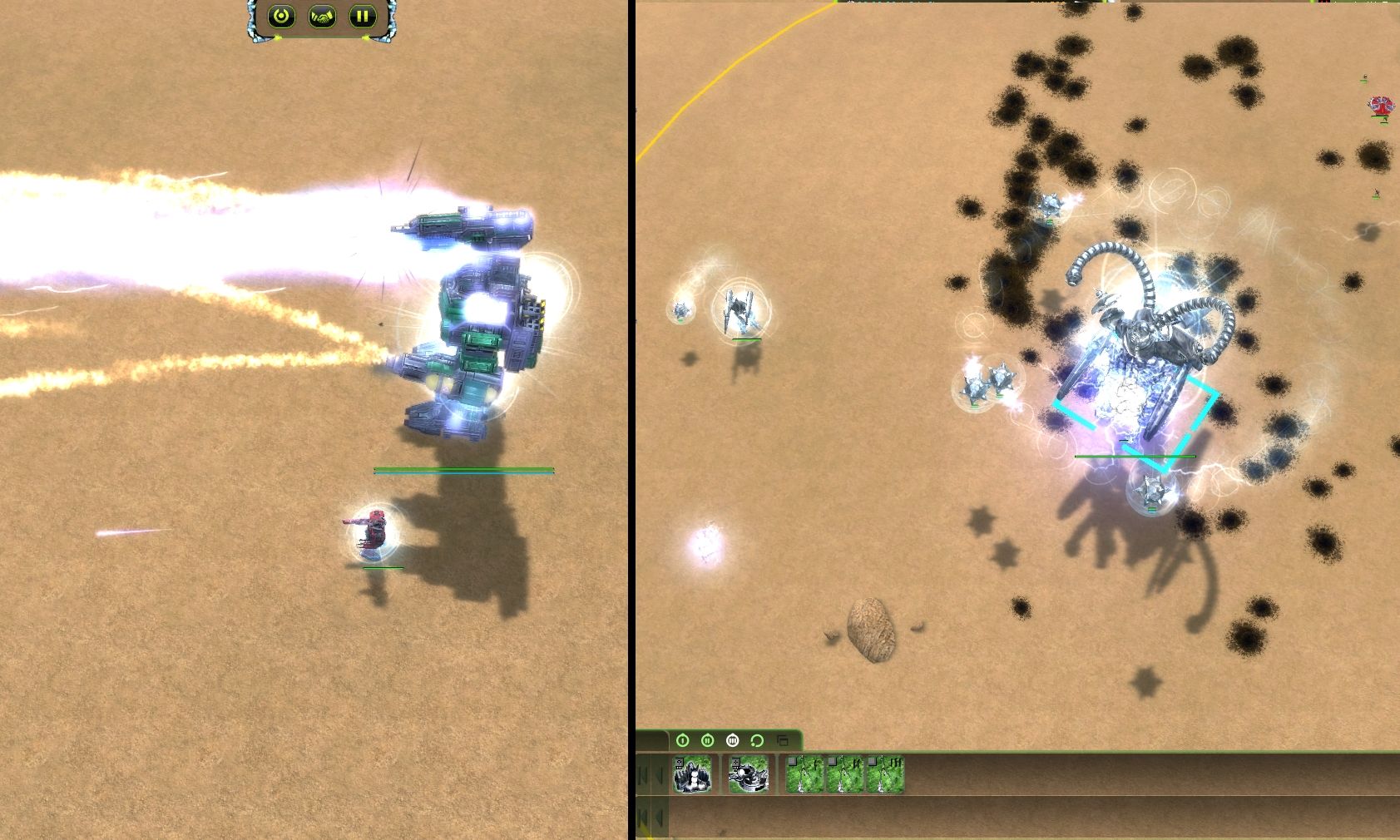 On the right side, the lvl 1 hero only has 1 Defense orb orbiting it, while a fully upgraded lvl 5 sera hero has 4 (with those upgrades, but can have more). The orbs circle constantly and partially absorbe some weapons fire on the Alpha heroes

Difference in upgrades for starting hero and final hero level. Here we have the weapons slots for UEF heroes, and all 3 slots for SERA heroes shown.

As you can see, there is quite the difference between the 5 levels.

There are several missions, like land and naval gateways that spawn enemy units, or bases that host specialized teleports that teleport enemy SACUs behind your defense lines, nuke or arty bases, naval bases or air bases that need to be destroyed, and many more, picked randomly (and also based on difficulty, or selectable in map settings in the lobby).

Base area for the hero 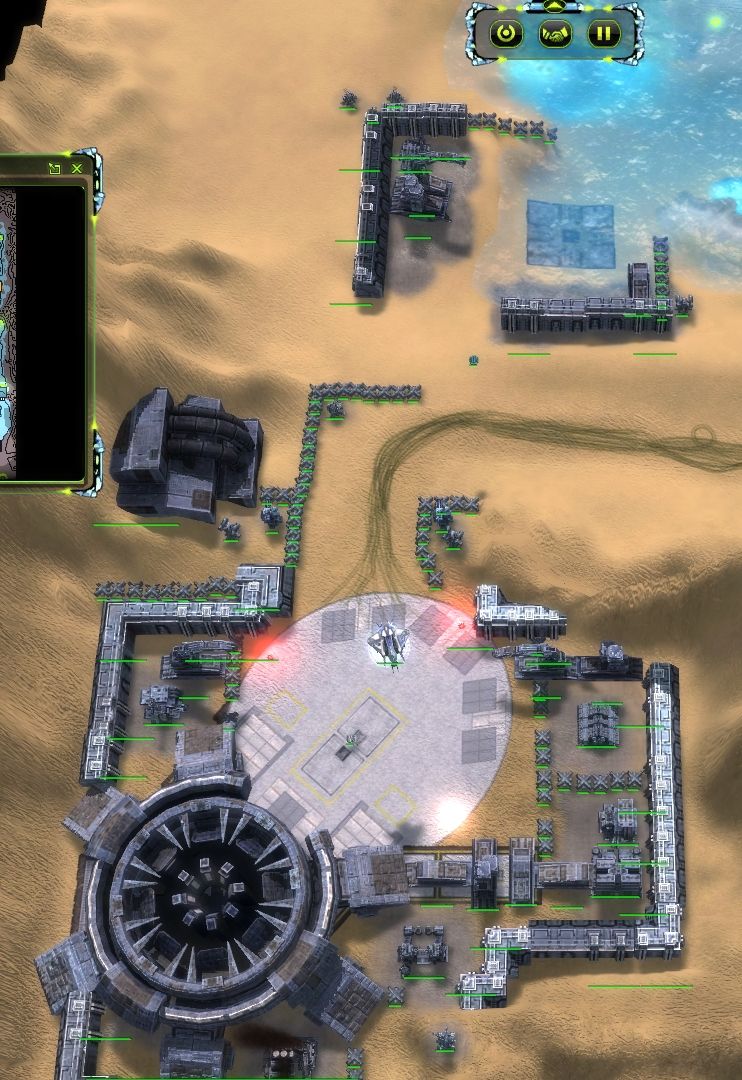 this is mostly decorative, to give our hero a starting location and a respawn point if it dies 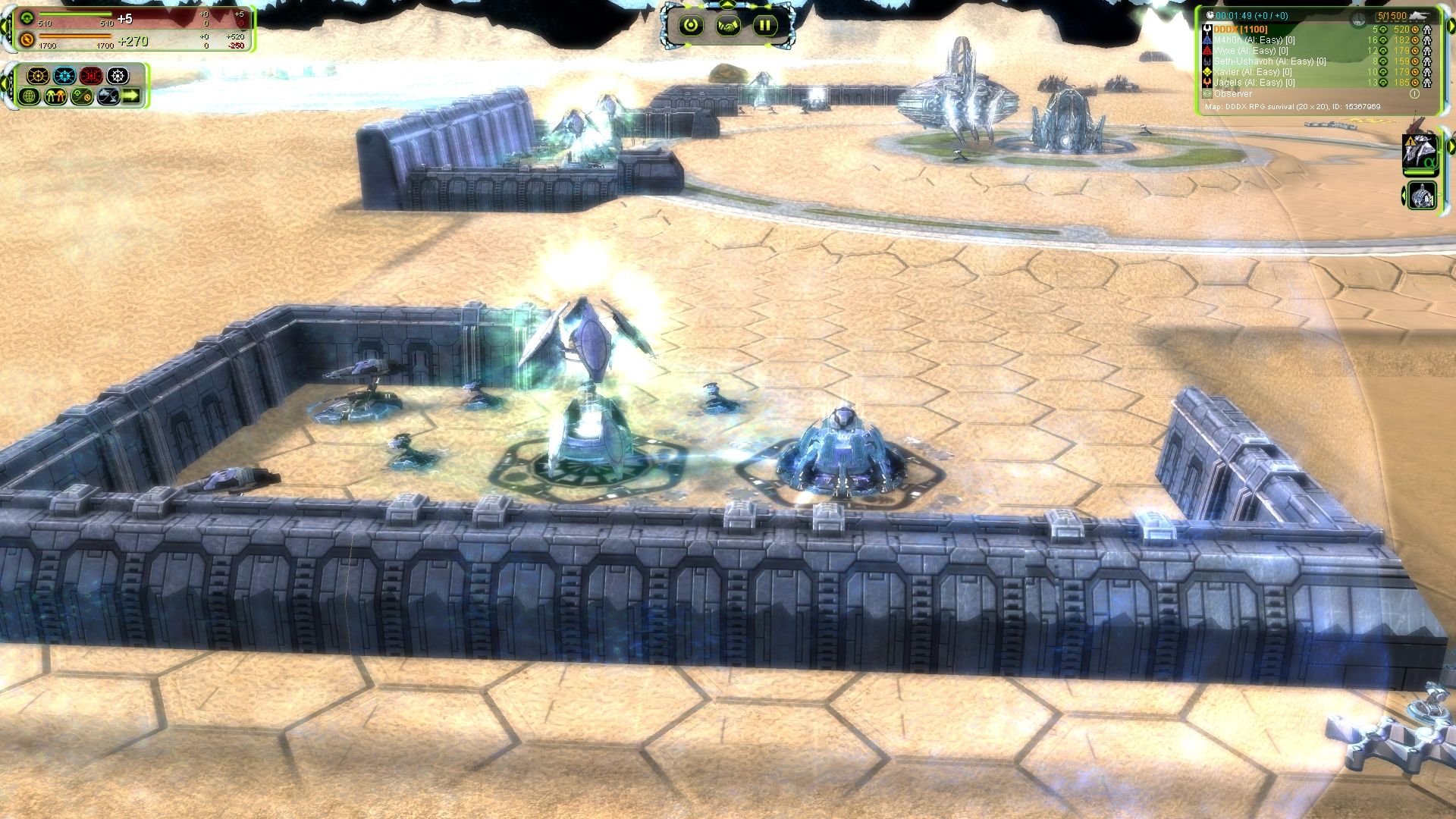 Forward outpost that gets crushed at the start of the game, mostly decoration but can be a problem if there's a player 7 and he is allowed to reclaim the wrecks early on. 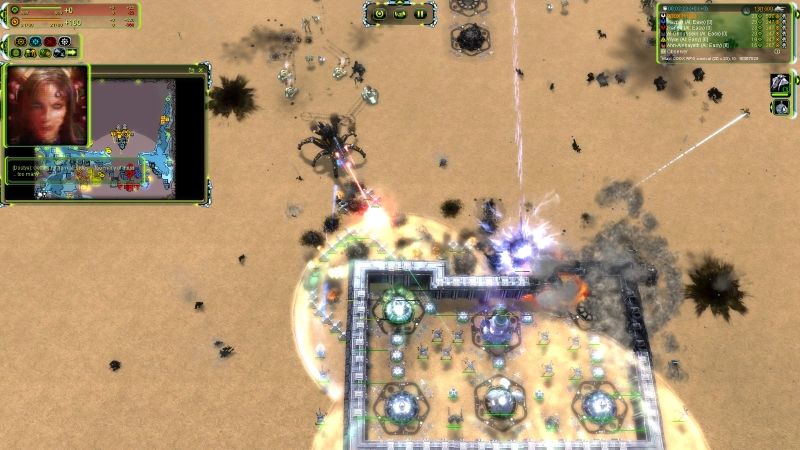 As for heroes, they come with a very buffed Overcharge, various drones (based on picked upgrades), a unique ability button (per faction, usually long cooldown), special auras that buff your team or nerf the enemy (each faction has 2, upgradeable via enhancements), buildable epic base buildings and unique experimentals (but only a very limited number), as well as an array of weapons and upgrades for you to pick (usually between a shorter range weapon, longer range and AoE/specialised).
They also have special abilities, like Aeon's Eternal life, that does not let you die for a short while after getting killed, mind controling enemies as Cybran heroes, spawning team-friendly Othuy energy beings as Sera heroes, getting extra regen while standing still as UEF heroes...and many, many more

NOW FOR CHANGES IN VERSION 157
(straight from the file Changes.log inside the mod)

Finished Aeon hero rework, with all acompanying abilities and units
Made all heroes have varied abilities based on current enhancement,
Made hero abilities more powerful and gave them to all hero levels, not just 3+
Added experimental walls blueprint for UEF Alpha, defense orbs for Sera Alpha
Added transport drops
Added several new enemy units, both in waves and as separate events or waves, or as custom events
Added custom events in map - scalable with difficulty:

With plans to create a few more in the future.

Made heroes available to map script even if there is no PLayer 1 to own it, and made them controlable by defenders
Increased map area, most notably behind our lines
Added map dialogue scripting for most major events
Added starting base + attackers to annihilate it
Added option for extra starting defences for extra noob players
Improved Island mission script - should be much easier and more rewarding to capture the island
Added anti teleport tower bases that prevent BO tele exploit till killed
Fixed Paragon nuking script, Paragon is again safe to be built and does not break map with millions of nukes
...and many, many more...

PLEASE WRITE HERE ANY FEEDBACK, FOUND BUGS OR DISBALANCES of the map waves, bosses or heroes
Your feedback is much appreciated.
I will update this thread as new changes come out.

probably the best surv so far

I will assemble THE BOIS and check it out.

@DDDX Do you have a 145x97 image I could use for the NewsHub for a Post on this for you so others know about it?

Well I can certainly make some, what exactly do you need? Screenshots of the action, the map, what?

@DDDX - The new version seems to break with All Factions Fixed and EXMEX mods. Can you take a look into it when you get a chance? Everyone is on their own team everytime.

@revekius sure will do, there's a bit of things i need to fix or balance still. Like the boulders obstructing new mex fields being way too bouldery in HP

This looks really cool. Gonna have to give it a shot.

Thank you @DDDX. Do you have a patron account to promote and fix those bugs? The new map deleted the old map, and I can't find the old map in FAF so we are stuck right now.

Thank you for updating the map. I truly love all that you do.

well...v158 is out and uploaded, still has some bugs to iron out (not to mention a complete workaround so that it does not use some of the meshes...).

I tried it with ExMex and all worked fine. Also tried 2 All faction mods (there's a lot of them) and it worked.

*Fixed rocks HP
*Nerfed air crash dmg for several high end experimentals
*Switched some starting defense buildings to option for extra defences so that they are not in the way of buildings
*Flattened Palace base terrain
*Fixed Jaggernaut projectile remaining on that unit (there are several more, Blackops team is working on that)
*Made Royal turrets and allied Paragon unreclaimable, to prevent early mass income by reclaim

*Buffed Aeon hero lvl 1 laser dmg
*Fixed Aeon hero lvl 2 - turrets not being rebuildable after destruction by the hero
*buffed all starting level heroes HP slightly ( a firebeetle can still take out some of them without upgrades, play safe)

So far all seems to be working, some units are too strong still.
One known bug is that the Paragon nuking script executes regardless of if the defenders made a Paragon - and it should not. 22.000 damage navy nukes around min 32+, targeting various t3 buildings. Will fix in v159 so that it only triggers when Para is built, like it's supposed to

*Make the starting dialogue, battle, and mid base optional in settings, so you do not have to go through it every time if you do not feel like it,
*Reworking and buffing end game Bosses, to add them partial destructibility, more abilities, effects, different behavior based on hp remaining, more and varied minions,
*Check compatibility with some more extreme mods like 30% particles, AllFactions, and the likes,
*Add more random missions (in the future - Nuke sub event, Carrier swarm event, warp rifting all over the map (like in GaryTheGoat's Survival_stranded)
*Clean up script by making most LOGs and Warnings optional, to speed up SIM
*REWORK all used models that borrow from other mods, so that they...don't. (warned by the Creative team about this).

Some Blackops units have had their projectiles screwed by the latest FAF patch - the rapid fire projectiles in particular (like Juggernaut's) remain on the map and eat up a lot of SIM speed, making the game slow as f**k after min 35.

Gonna try to hunt them all down and switch their projectiles to default Ravager minigun - they are a bit smaller but other than that should be more less the same visually.

Till then sorry for the slow game speed.

@DDDX Could you report to me what projectiles they inherit from? We're trying to fix this issue from our end as well.

@jip I have cheat spawned every BO:U and every TM land unit and as far as I can tell it's only the Juggernaut battlestation that uses it.

BEL0307 and my unit SBEL0307U ( S for designation it's my mod hook, U meaning it's a unique special hero-only unit)

Nothing special about it. I did hook the BlackopsWeapons.lua (needed to add a more potent Inquisitor weapon to go off with Overcharge on Aeon hero), but did not edit anything else in it.

And that's all, nothing to report.

Tried switching it with TDFHeavyPlasmaCannonWeapon from terranweapons, but gotten same result.

Hey I'm loving the map and game mode but I seem to be running into an issue where the game freezes about 20 minutes in. Are there any mods I should not be running with this map? Aside from the required mods I'm running particles 10% and Simspeed ++

@mitchbear7 next time that happens, pause the fame, press f9 and only select the WARNINGS tab
Look at the last warning before waves stopped, it should be an error regarding the file DDDX_RPG_survival_script.lua file (because that's the one spawning stuff,doing the timer etc...

This can give you an idea what did what.

10% particles - I have never gotten this one to run propperly with my map, simply too aggressive, too many things overwritten.
Keep in mind that some units or weapons or abilities have a big number of effects to them, in my mod but also TMayhem.
Look at cybran t1 hydrocarbon perimiter monitoring station, for example.

I would avoid the 10% particles mod completely.
Use SUM speed,that one seems to help a lot.

Also, there are currently several issues with the map, some of them my fault (nuke subs misbehaving and slowing things down) as well as FAFs fault (bad projectiles for some Blackops units after FAF update).

I am aware of the issues and will fix for v159, and the Blackops team is on top of the other problem.

Ty for the feedback, tell me more

@DDDX thanks a lot for getting back to me. I'll certainly keep that in mind and look at it in more detail next time I run it!