This topic has been deleted. Only users with topic management privileges can see it.
last edited by Mach
1

if atlantis would be overpowered by battleships not being able to groundfire it, thats when you balance it by nerfing it, the reason it currently isnt overpowered is only because of this broken aoe hitting underwater mechanic keeping it useless, first we need to fix the mechanic that is broken (aoe hitting underwater) and then nerf atlantis until it is balanced, then it will be balanced without this counterintuitive groundfire nonsense currently used to "balance it"

why is it broken to groundfire submerged units

why is it broken that a battleship can shoot a submarine that is underwater with its surface cannons?

yes, that is what i asked

yes, that is what i asked

a game play should be straight forward to understand. There shouldn't be tactics abusing a dubious logic to be part of the meta.
For a new comer, a bs with little torpedo capability shouldn't be able to counter submarine.

on top of this, the way you have to do it seems counter intuitive :

yes it means that it is a bad mechanic game design wise.
It works (read : game is balanced ish), but it isn't healthy; and a balance avoiding this mechanism is preferable.

maybe this picture explains it easier 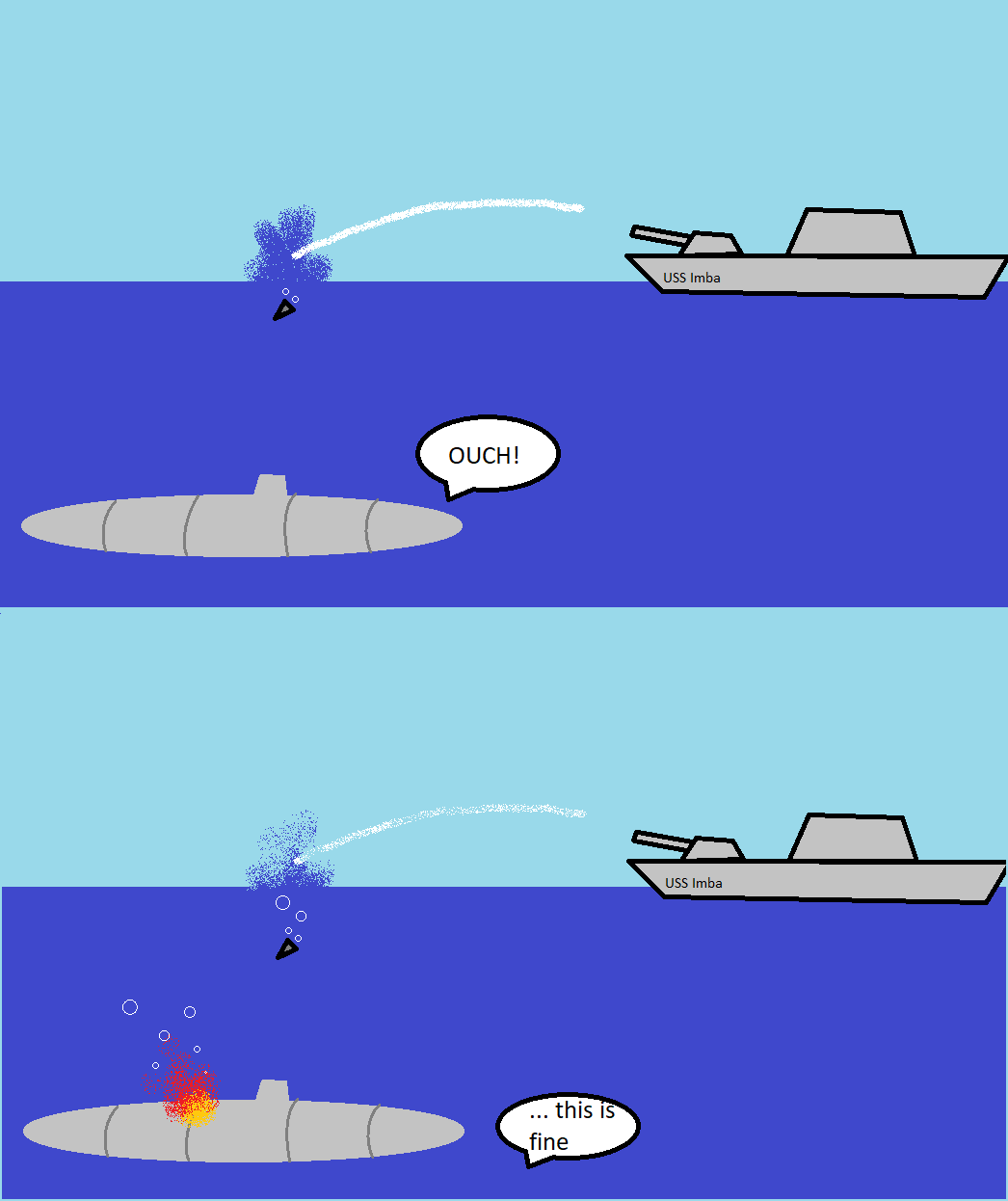 sorry used the wrong word. i meant bad for gameplay

Problem No.1
Weapons AOE ignores water, if it's in the range of the explosion it gets damaged.
Problem No.2
Subs are in certain depth and they don't change it. And it is very close to the surface. Normally subs would be much deeper and AOE of those weapons would not affect them at all.

sorry used the wrong word. i meant bad for gameplay

well i'm gonna give you another situation :
Let's remove aa from the game.
But don't worry you can still kill planes by groundfiring arty.
Good news is that you raise the skill threshold and you induce some big brain gameplay where the guy with bomber will try to dodge arty shots before dropping etc
you can even have it balance : some pre-shot visualisation to predict in a easier fashion where to shoot; maybe increase all the rof of arty.
In the end would that be better gameplay or worse gameplay than what we have ? well you might like that, but i wouldn't enjoy it tbh.

Subs are in certain depth and they don't change it. And it is very close to the surface. Normally subs would be much deeper and AOE of those weapons would not affect them at all.

One possible fix is for submarines to go down as deep as possible, rather than being at a fixed depth. I have no idea how hard that is to code.

If that is not possible: once you recognize that subs aren't supposed to be close to the surface, and they are only represented in the game as being close to the surface because of engine limitations, there is no reason to allow them to be ground fired by battleships, at least, when they're not in very shallow water. Other possible fixes would be either (1) eliminate/reduce the ability to ground fire subs, or (2) eliminate/reduce the ability to ground fire subs when they are not in shallow water. Either one of those things is preferable to the current situation. Perhaps you could accomplish 1 or 2 by giving subs a different "hit box" when you're looking at AOE splash damage compared to when you're looking at direct fire like torpedoes and depth charges.

It would affect balance to do this (ground-firing subs at this point is an important part of the meta), but we can adjust balance by changing unit stats.

The main reason why groundfiring is something i want to stay in faf is because it is one of the rare situations where micro is rewarded quite heavily. I know lots of people on faf don't care about that but i do. I do agree that the groundfiring doesn't make any sense from a logical standpoint but i don't give anything about that tbh. Gameplay is all for me.

Harms are a great example of this btw. They can be groundfired by battleships and even uef/sera cruisers i believe, but people still see them as super strong simply because groundfiring them takes a lot of attention and micro. All in all you get a big reward, free kills, if you groundfire them but it comes at the cost of great time investment.

Your example would make sense if you didn't remove aa from the game, but still added the option for arties to be able to hit air by groundfiring. After all even without groundfire you can still counter subs. There is a very important difference between the 2 situations: In 1 it is mandatory and in the other one it is simply one of multiple options. Therefore, if in addition to there being aa you would be able to do dmg to bombers if you did some sick arty groundfire then i would love it to be added to the game

I havent tested it much but from what I remember you can make the submarines go deeper, but if they get on a shallow water they wont automatically go to the deeper one again and you have to surface/submerge them again.

"why is x broken"
"well because i dont like it, look it's broken"
Great.

They're not broken because the game is balanced around it. You don't like it because it doesn't fit REAL LIFE LORE. Except we've been moving away from REAL LIFE LORE in this game with nukes no longer exploding in mid air when hitting air planes etc. I didn't give a fuck about the REAL LIFE LORE of ground firing submerged units when I learned about it and I bet people aren't going to give up the game or cry into their bowl of cereal because REAL LIFE LORE said their scout swarm should have stopped the nuke.

I also don't see much of a problem in having a unit that you can counter through additional expenditure in apm. The air/arty example would hold true if you made it a possible way to counter air whilst still keeping things like aa except possibly less efficient. Does that now introduce other factors into the game? Yes. Is it good? Who knows.

A scout swarm shouldn't stop a nuke because the nuke should be big/heavy enough to punch through it. Allowing scouts and other T1-T3 aircraft to stop a nuke is therefore bad. It's not "REAL LIFE LORE" to let people block nukes with paper planes.

I think artillery can hit air units (look at people blocking mavor shots with t2 transports). I think light arty and fatboys don't shoot high enough to hit most air units (although if there are extreme differences in elevation, perhaps they would be able to hit). And I have seen people ground-fire artillery to try to hit a Czar. I think I've seen people ground-fire a scathis to try to hit flying ASFs. (Speaking of ridiculousness, an ASF can absorb a full scathis shot without dying o_O)

If t1 bomber planes were drawn in-game as "low" enough to the ground to run into shots from weapons platforms like t1 light arty and fatboys, we would have to ask: why?

Are they drawn as being low to the ground because attack bombers are low-flying units that have to brave enemy ground fire in order to deliver their payload? In which case, they should collide with those weapons and take damage because that is what is intended. OR, are they drawn as being low to the ground because of engine limitations or some other arbitrary reason that has no connection to what the unit is, in an abstract way, supposed to represent? If it's the latter, then there should be no collisions. Either the bombers should be drawn higher, so they can't collide (and so their visual representation in the game matches what they are, in an ideal/abstract sense, supposed to represent), or at least as a workaround those projectiles should pass harmlessly through them without colliding.

It might be interesting if units could "ground fire" to an arbitrary height (as in: ground fire at this spot, but pretend like there's a really high mountain there, so actually you're shooting into the air) in order to let ground units damage things like Soul Rippers and Czars. Interesting, sure, and it would reward micro, but would it improve the game? I think the answer is "no," just like it would not improve the game to allow flak and SAMS to ground-fire against ground units.

An explosion underwater is worse than an explosion on the surface. The reason is that water does not compress, unlike air. If the game was realistic, a unit should take more damage from surface fire while submerged.

@The_Mak realistically any shell shatters the moment it hits the water... you cannot shoot a sub with a cannon, that's why torps exists.

Stop talking about real-life and talk about game design.

the "real life lore" is called physics and this game is based on them, what you are saying here is that broken physics are fine because it takes micro to abuse them properly (because even from start the game itself wasnt designed for battleships to be able to shoot at underwater units, this just proves the brokenness of this mechanic further as there isnt even a control to tell your units to do something like this and you have to work around to get it to happen by using groundfire), unlike artillery hitting air units (which even has some sense sometimes unlike this), this takes a lot less skill to do

yes it works balance wise, but thats like fixing a hole in a ship by blowing another hole on opposite side, its not a ship anymore and sinks faster, the solution like I said is to stop fooling yourself into thinking this is balanced and instead fix the broken mechanic first and then nerf underwater units so they are balanced without it, currently they arent OP because of a broken mechanic, without which they would be OP and then you nerf them, and then you get a balanced game without using nonsensical mechanics like this to seesaw the broken units

I guess its once again up to whether the "micro pros" on balance team can stand their skills in fighting the controls be turned obsolete by fixing the controls instead, something which seems to stall this game for a while now