Best posts made by TheWheelie

I'd say it is quite important for the community to have good looking leaderboards, but they are quite lacking now imo. It's very basic/bland and doesn't give enough information at all. It's quite obvious when you compare it to something like the aoe2 leaderboards: 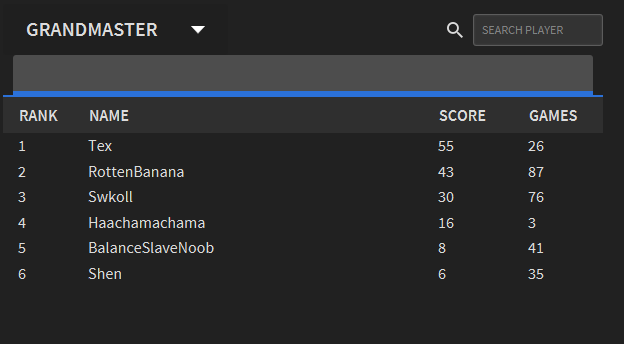 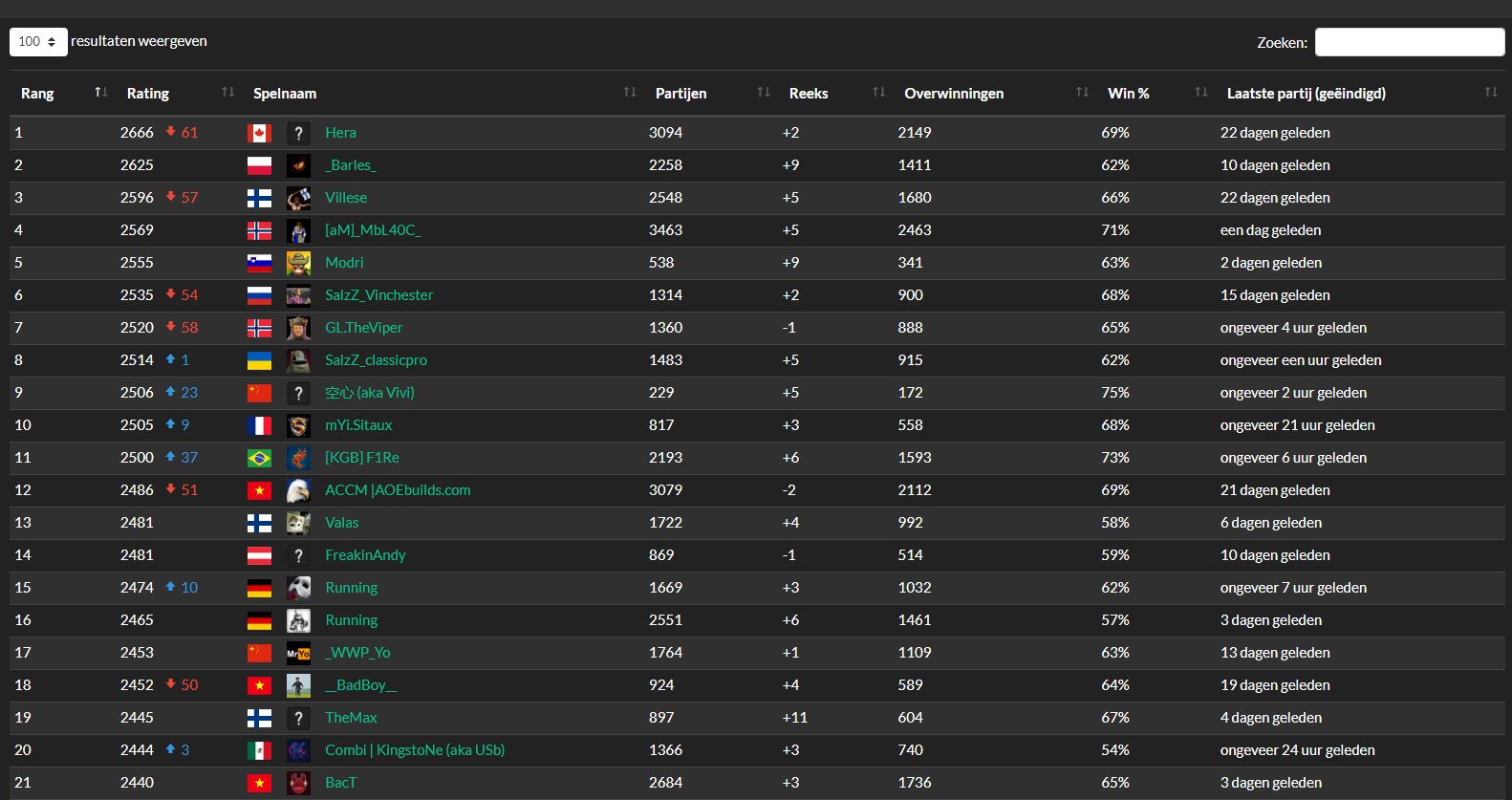 By far the most important one to add is the current rating. It is absolutely crucial to properly understand the players strenght. Most other categories are not as crucial but still very nice to have just to liven it up and give some interesting data.

The layout of the black row > grey row > black row is also a must imo. Especially if there is more information it improves readability a lot and it's so standard i'm surprised it isn't in the client. It should also be in the Coop rankings and custom games table tab. Just noticed it already exists in the live replays tab.

Currently you can see a players information by rightclicking > show user info, but left clicking does nothing. A bit weird to me but maybe i'm nitpicking.

Also speaking off the player graph: 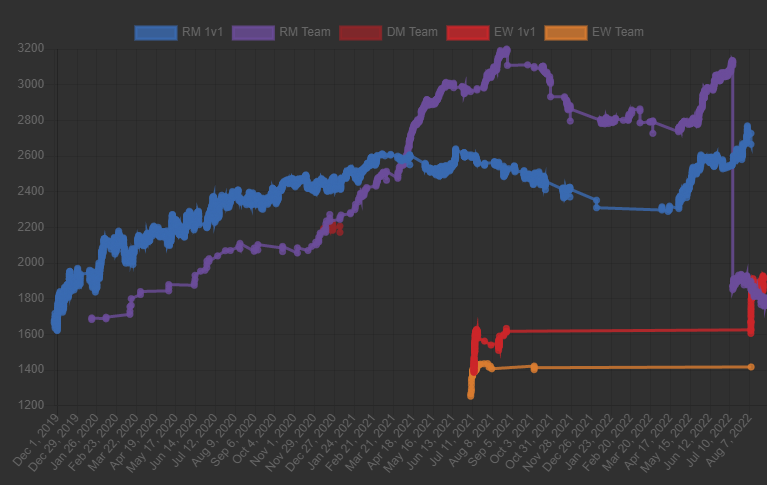 You can see very vaguely see some indications on the faf graph but if you compare it to the aoe2 graph the constrast is lacking.

Also maybe an idea to mix the different rating graphs? Maybe it's personal preference but i feel like it looks a lot nicer. Most chess sites do it this way as well.

Also a little bug: You can drag away the information on the leaderboards without being able to get it back: 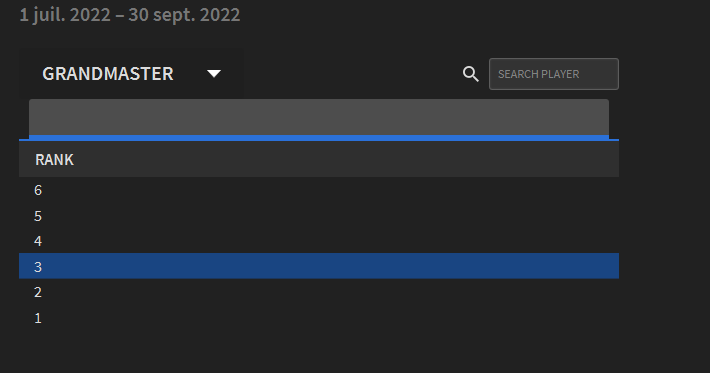 I know i was a bit blunt but i just think these would be some nice improvements.

Kisses from the big man

Most top players in faf use lots of hotkeys, as is the case with all rts games. However even though faf has tons of different possible hotkey binds you can use they end up being unusable for 1 simple reason: The lack of keys on your keyboard to assign hotkeys to. This is especially noticeable in faf because unlike other rts games there currently isn't (fully) a system in place to work around this issue.

Let me try to emphasize just how bad this is.

A UEF land fac has 20 possible units it can make. Just assigning hotkeys to those units already takes up every single letter key that's in a realistic range of your hand. You are somewhat spared by the current hotbuilding key binds that are currently available by being able to merge land/air/navy & build hotkeys together, but at this point you've only covered the basic hotkeys and already lost 20 keys. General unit commands like move, attack, patrol, stop, assist, reclaim, capture and repair need to be added too. Then you have tons of other often used hotkeys too like drop (from trans), OC, pause, repeat, launch tml, etc, etc. At this point i have only touched the more common hotkeys and haven't even begun assigning them for unit abilities, selection or other features.

As mentioned earlier there is already somewhat of a solution to this issue and that is the current hotkey combination list under hotbuilding. Although it isn't perfect, if it would be possible to add whatever combination of hotkeys to any button(s) you want it would already be a lot better than the current situation.

So what i'm envisioning is a mod with some sort of template that allows people that have no understanding of coding to easily adjust a few values to construct their own hotkey combination. For example You should be able to assign dive, drop, launch tml and enable/disable shields all to a single hotkey. What i think is most important is that there should be some sort of extensive instruction file in the mod for how to properly use it.

If anyone has a different idea or solution that's viable feel free to share it.

All in all the mod should allow of better competitive play since a better hotkey setup allows for more possibilities.

posted in Modding & Tools •
RE: Should you be able to send engineers to other players?

Isn't that kind of a useless statement? Old and/or experienced players are the only ones who are willing to run in an election like this.

Some ui improvements (not necessarily small suggestions but i'll post them anyway):

posted in Suggestions •
RE: Calling for nine2 to resign as Promotions Councillor

Considering the amount of times i've seen "you're chasing away all the contributors!" in the last week i feel like i have to point out that developers are not the only contributors and i can't help but notice that most of the support ftx actually gets is from active contributors.

Hello. I just discovered FAF two days ago, I’m greatly enjoying this game, and the community is great. I have a professional SC2 background and I was gifted with enormous dexterity allowing to be a perfect specimen for RTS competitive gameplay domination. I have watched every single Gyle and BRNK video up to date saturating myself with deep lore and gameplay knowledge. I have finished at least 2 coop missions on Hard and played 3 games vs Sorian AI Adaptive and 2 games vs Sorian AI Rush with a perfect score and finishing the games in under 50 minutes. If I were to guess I would say I’m pretty decent at most gameplay elements, in particular I'm really good at micro and usually dominate my opponent in a straightforward fashion. Also I’m really good at ecoing but I’m struggling with this one thing... Could someone please tell me when to upgrade my Mass Extractors to Tech 2? Thanks in advance.

Atlantis should be able to squash other subs

posted in General Discussion •
RE: Why so gay thing exist?

@myEmperor said in Why so gay thing exist?:

Would our game really be worse without this unit?

Latest posts made by TheWheelie

Almost every past bt/bp change was more impactfull for timings than the current hive change. The only hive bp "timing" change i can think of is nukerush on dual gap and that's it.

When uef get's an above 5% pickrate in tourneys.

posted in Balance Discussion •
RE: Is it OK that engi stations can eat experimentals?

they can't reclaim while following so it'd be useless regardless

posted in Balance Discussion •
RE: Is it OK that engi stations can eat experimentals?

Using kennels as reclaim should be completely out of the question from the start since they dont move with the unit while reclaiming, so unless you have an hour of time you aint reclaiming a gc thats being microed.

Hives work way easier for this since they have way more range so you cant just walk a t4 or some randon t3 units in a hive farm range, although you should realise that walking units into range of a 20k mass shielded bp farm is probably not the best idea

posted in Balance Discussion •
RE: Make snipers use E to shoot/reload their weaponry.

posted in Balance Discussion •
RE: Can we adjust loading acu onto transport?

I think the issue hes talking about is about loading up your acu in a trans when hes in the middle of a base. The transport cant find any space so lands outside so the acu has to walk to it and gets stuck in pathfinding hell for 2 min.

A clearer example is when u t1 trans rush at the start of a game, prep by moving all your engies to 1 side so theyre all together and load them up, but then the trans sees a nice empty spot on the other side of the fac. U manually move the transport back ontop of the engies and queue the order again and this time it lands right next to them.

Luckily bermuda saskiya crateria and mars don't have their spawns together

posted in General Discussion •
RE: Feedback on Cybran vs Uef ground only