This topic has been deleted. Only users with topic management privileges can see it.
last edited by Swkoll
4 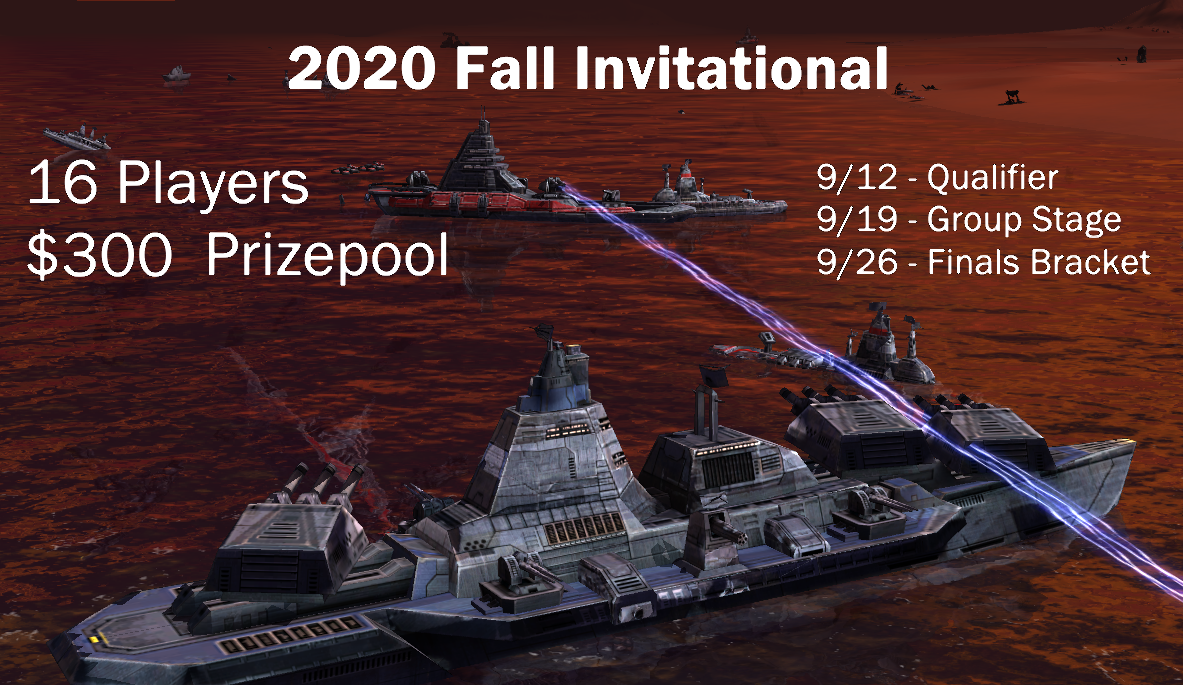 Hello and welcome to the 2020 Fall Invitational Tournament. This will be a 1v1 tournament based on the format of the 2020 Summer Invitational with some minor tweaks. For those who aren’t familiar, there will be series of invites sent out to previous tournament winners, and an open qualifier on September 12th to fill the remainder of the 16 slots. This is followed by a group stage on September 19th where the top 8 players will advance to a single elimination finals bracket whose winners will receive prizes and glory .

What’s changed?
I’ve decided to move the start time for the tournaments an hour earlier to 14:00 GMT so the tournaments won’t run so far into the evenings for Europeans. Also, if there is a final game required in the Qualifier, it will be a BO1 instead of BO3. Lastly, the third place match and the championship match will be played on the day after first two rounds are played.

Would you like to contribute to the prize pool?
You can donate via Paypal to support this tournament.

The qualifier:
This is an open qualifier, all players who have not received invites are welcome to participate. It will be a double elimination tournament with BO3s in the winner's bracket and BO1s in the loser's bracket. Maps will be selected by myself from a pool for each round. Players will be seeded by ladder rating.

The group stage:
This will consist of 4 groups of 4 players playing a round robin style tournament with the top 2 of each group advancing. Games will be BO3s. Groups will be seeded by Invitational points followed by position in the qualifier, and finally by ladder rating. Maps will be chosen by players from a pool of 10 using a veto/pick system with 2 vetoes each, players will make alternating vetoes and picks with loser seed vetoing first and higher seed picking first.

The finals bracket:
This is a single elimination tournament with all BO5 matches expect for the championship match which will be BO7. Maps are chosen by players in a pick/veto system from a pool of 15 with 3 vetoes each, players will make alternating vetoes and picks. Players advancing from the group stage can submit one map to the finals bracket map pool (subject to Tournament Director veto). There first two rounds of the Finals Bracket will be played on Saturday and the 3rd place and championship match will be played on Sunday. The 3rd place match will start at 14:00 GMT and the championship match will follow it.

If i will add a lite extra (say $30) for anyone of the top three who will play in the group and final stages on random only, would anyone be interested to attempt?

In to play nice isis games once again

I can dedicated cast/stream the final stages, and possibly the group stage. Need to get my 1080p settings for FA but should be doable...

Thanks to advait_hasabnis aka JohnBetty for a $30 donation to the prize pool! This brings the total prize pool to $345 and because of this I've decided to adjust the prize pool distribution to create prizes for 5th-8th place in the tournament.

Could we maybe get a nice Avatar as a reward as well ? Pretty please

All games are BO5, expect the finals which are BO7. Same pick and veto rules as in the Group Stage but with 3 vetos per player instead of 2.

Stop using the word sellout in the context of my stream. Its bad for business.

Also: here is a search string that you can enter into the Java client to pull up all Round of 8 and Semifinals tournament games (copy it to your clipboard, then in the FAF client, check the box for: display search query, and then paste this into the query input field, and press enter to perform the search directly from the query input field).

Also: here is a search string that you can enter into the Java client to pull up all Finals and Third Place games (copy it to your clipboard, then in the FAF client, check the box for: display search query, and then paste this into the query input field, and press enter to perform the search directly from the query input field).

Congratulations to Nexus for winning the 2020 Fall Invitational. Nexus defeated Turbo2 in the grand final 4-0, completing his run of going undefeated for the whole tournament!

Congrats as well to our runner ups, Turbo2 in 2nd, Tagada in 3rd, Petric in 4th, and Espeperant, Archsimkat, Turin, and BlinchIk in 5-8th. Thanks to all the donors as well as all the streamers and casters who covered this tournament.