This topic has been deleted. Only users with topic management privileges can see it.
last edited by ETFreeman
0
E
ETFreeman

Screens of rating change. All of these must be draw. 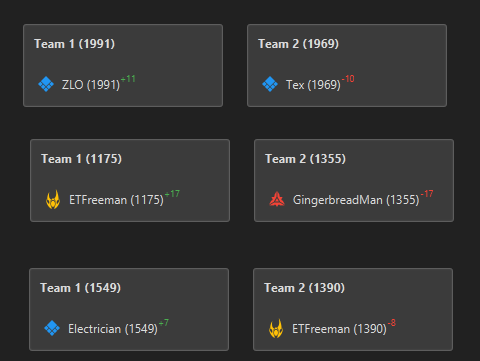 (All of these were ladder games)

Poor @bjorn, he lost 5 games in a row, then @matri drawed him and it counts as loss #6. Not fair!

Known bug. Askaholic fixed it a while ago but the fix resulted in wins not counting on ladder. So it was reverted and now the bug is back.

The way the game reports results is cursed and I’m not sure anyone is really motivated to attempt a second look at it right now.

Apparently, genuine draws count as a loss for the one who dies first. Replay ID: https://replay.faforever.com/13647599

I have a proposition for this :
If you can't solve the issue cause it's technically a nightmare, we can at least make this bug known for all the player.

Currently because it's not considered an exploit to use it on purpose, one player who knows about it can abuse it to get a win on someone who doesn't know. So instead of not talking about it to prevent too many people to know about it, I propose the opposite : we pin this thread somewhere visible, so new ladder players can know about it before launching into games. Maybe into a welcome guide for new player for example, between "hey come on discord", "here are the tutorials", you would have "known bugs you should know about", and of course "bannable exploits".
If you persist on not making this bug a bannable exploit, i think making it known is the best approach.

If all 1v1 ladder players would know about the issue, it will at least make it a little more fair, even if it will continue to be stupid and abusable. In order to not turn draw situations into a case of "who ctrl k first to victory", players could mutually agree to not use this bug, some sort of gentleman agreement.

And before someone shows up to point fingers at me : yes i have abused this to get a few victoies recently. I thought it was a well known bug, but realizing my lasts opponents didn't know about that ... I think now it's not very fair ... I'd like to apologize.

Problem is it's going to basically be impossible to differentiate "exploit" from "this was the best game move from me and I incidentally benefited from doing it in a way I didn't expect it." Mods can't stop people from going for a draw and getting a win out of it due to a game result issue, so it can't really be considered an exploit that action can be taken against.

Even against people that are well aware this is an issue for ladder nothing can really be done against them. What are you going to tell them?

"If you try to draw the game from a lost position again you will get banned" or what?

I don't really think you need to include idiosyncrasies of game result reports in a guide for a dude that literally just opened the client. Nor do they really need to be shown a list of exploits or whatever. They barely know how to host a game.

And it's not a huge issue, just a well known one. Draws aren't particularly common. I'd wager knowing and consistently using this exploit would net someone no more than 50 ladder points.

There are bigger issues to fix out there. While this one would be nice, I don't think it's a priority.

So I have been looking into this between doing SCTA work and have talked to Balth briefly and I think I found a solution (emphasis on think). If folks around tomorrow around Noon to 3 PM EST I should have a drafted mod up by then.

As ftx posted in this thread already: the problem is the game reports incorrect results sometimes. If we can fix that then we can fix not only this draw bug, but basically all rating issues that exist atm.

I’m not hugely motivated to work on it because first off it’s a bug in either the engine or the lua code, of which I absolve myself of all responsibility, and secondly because I need someone else to test with, which is annoying because of time zones. But if someone sees me online in discord/zulip/Aeolus and wants to volunteer to run some test games, hit me up and I’ll take another look.

As I said on zulip Askaholic, that is kinda what I’ve looking into fixing recently. But I’d need to see what server is reading from the log. To determine if I am actually successful.

@Dragun101 The game logs whenever it reports a game result. To reproduce you can ctrl-k and the quickly exit the game. At the bottom of the log file you will see that it reports “defeat” for all armies that are currently alive.

See the issue for a summary of work that I’ve already done: https://github.com/FAForever/fa/issues/3087

Coolio will work on it