Another player told me I was on a "Ban List"

This topic has been deleted. Only users with topic management privileges can see it.
last edited by
1
J
JediOfTheShire

After playing a game I tried to join a new one and was immediately booted from the lobby by the host (a loser from my previous winning game).

He told me I was on a ban list for using multiple accounts. I have never played on a second account that I know of. Is this list real, if so, how do I find out what is going on and get things fixed!?

Is he just yanking my chain, a sore loser? I have < 30 games played and a 400 +/- 500 or so rating because I just play for fun and am still working on my econ skills a lot. This is the first time I have been kicked from a game like this, but if there is some kind of list (I can't find one) then I need to get this issue fixed!

Thanks. Conversation transcript below. 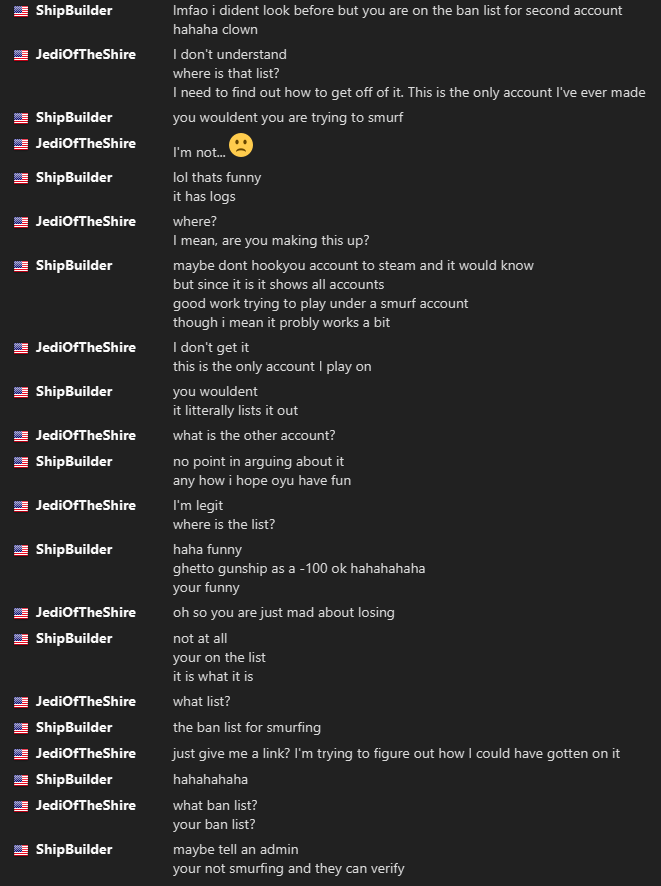 It's the dude's personal list of people he won't play with.

That guy is taking !smurfcheck (or whatever the command was) a little too seriously mby?

@jedioftheshire Some people forget that they too were once new to the game and that without new players FAF will eventually die out! Ignore the hater and keep on gaming

There is basically no trick that a -200 can't do. They can make a ghetto gunship or they could ctrl-k a t2 mex in order to build a t3 mex on top of it. They can surround a mavor with pgens so it shoots faster and they can assist a shield to help it stay up under bombardment. They can dodge in circles to avoid notha bombs, etc. etc. etc. What separates a -200 from a 1500 primarily is not how many tricks they know. It's more about avoiding bad behaviors/mistakes, and about understanding what is important and prioritizing that.

If I want to know if someone is a smurf, I watch the replay from the accused person's point of view. I see what orders they queue up, how they balance mass/energy, and look for mistakes. I basically ignore clever tricks or amazing micro like hoverbombing. I'm looking to see how well they balance their economy and whether it even looks like they're trying.

As far as I can remember, every single time I've looked at a replay to see if someone is smurfing (not on behalf of the moderators/admins, just on my own) I see gameplay in line with the person's rating. If they win, it's because their opponents made a lot of mistakes. Not because they're a secret smurf.

I figures it out lol. He probably used command !smurfcheck in aeolus and it showed a few other accounts to yours but he didnt consider that the commad does not work properly.

The command works properly, just very many people share IP's nowadays, so the results need manual filtering and refining to get any sort of reliability out of them.

Pretty sure the command uses to put Congreve and Farm as my smurfs due to us exchanging names a while ago. No idea if that ever stopped.