This topic has been deleted. Only users with topic management privileges can see it.
last edited by Swkoll
11 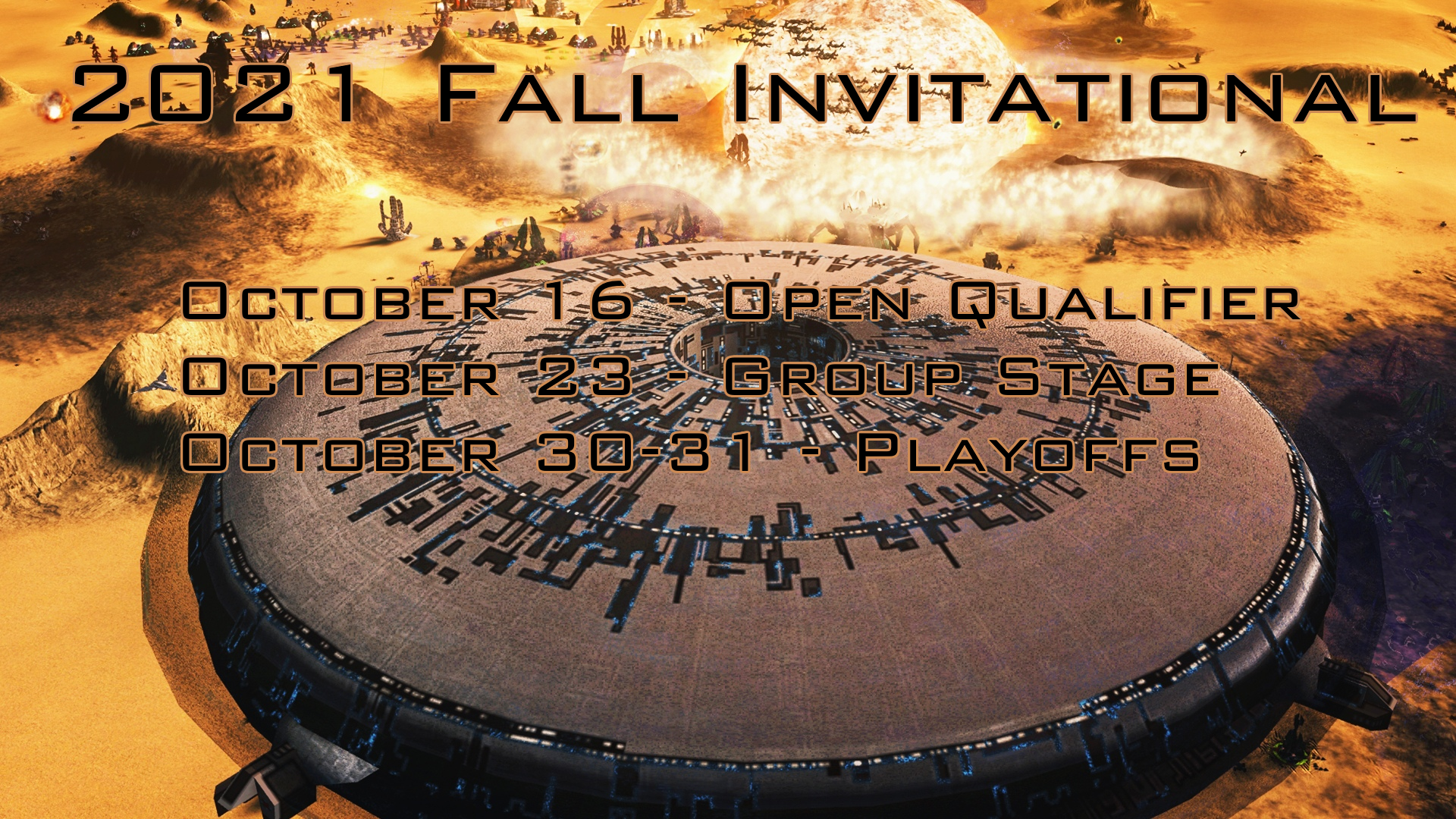 Hello and welcome to the 2021 Fall Invitational Tournament. The 2nd annual Fall Invitational is a top level 1v1 tournament featuring a series of invited players and an open qualifier to find the top 16 players on FAF. For those who are not familiar, there will be series of invites sent out to previous tournament winners, and an open qualifier on October 16th to fill the remainder of the 16 slots. This is followed by a group stage on October 23rd where the top 8 players will advance to a single elimination playoff bracket on October 30th-31st whose winners will receive prizes and glory, including LoTS qualification points! (See here for details)

All tournaments will be casted on twitch.tv/faflive starting at 14:00 UTC.

What’s changed?
Special maps such as crazyrush and hardffa will be put into their own category for the Group Stage and Playoffs rather than being considered normal 5x5s. The map pool in the Group Stage will be increased to 11 (from 10) maps to compensate. Morax's new faction vetoing tool may be used for the group stage and playoffs.

Would you like to contribute to the prize pool?
You can donate via Paypal to support this tournament and receive a fancy avatar!

The qualifier:
This is an open qualifier, all players who have not received invites are welcome to participate. It will be a double elimination tournament with BO1s and BO3s in the winner's bracket and BO1s in the loser's bracket. Maps will be selected by myself from a pool for each round. Players will be seeded by ladder rating at the time of signup.

The group stage:
This will consist of 4 groups of 4 players playing a round robin style tournament with the top 2 of each group advancing. Games will be BO3s. Groups will first be seeded by Invitational points, then the qualified players will get to pick their group. Maps will be chosen by players from a pool of 11 using a veto/pick system with 2 vetoes each, players will make alternating vetoes and picks with loser seed vetoing first and higher seed picking first. Faction veto will also be used.

The playoffs:
This is a single elimination tournament with all BO5 matches expect for the championship match which will be BO7. Maps are chosen by players in a pick/veto system from a pool of 15 with 3 vetoes each, players will make alternating vetoes and picks. Players advancing from the group stage can submit one map to the finals bracket map pool (subject to Tournament Director veto). Faction veto will also be used. There first two rounds of the Playoffs will be played on Saturday and the 3rd place and championship match will be played on Sunday. The 3rd place match will start at 14:00 UTC and the championship match will follow it.

Invitational points:
Invitational points have been updated with results of major tournaments since the Summer Invitational, all players have lost 25% (rounded up) of their points for decay, and then 8 points were given for 1st place in the Summer Invitational, 6 for 2nd, 4 for 3rd, 2 for 4th, and 1 for 5th-8th. 2 points were also given for 1st and 1 point for 2nd in the August League Invitational. First place in Mini LoTS #1 has also received 1 point. The 1st and 2nd place in the October League Invitational have also received 2 and 1 points respectively. This produced the following list of 14 invites:
21- Tagada
15- Nexus
12- Petric
6- ZLO
5- TURBO2
5- Paralon
4- Tex
3- Blackheart
3- Espi
2- Adjux
1- Yudi
1- Turin
1- Blast Chilled
1- archsimkat

Y-you can have mine

Thanks to archsimkat for donating his winnings from the Settling Scores tournament, the total prize pool is now $520!

Thanks to Yudi for also donating his winnings from the Settling Scores tournament to Fall Invitational, the prize pool is now $540!

Thanks to a $90 from someone who goes by Lord Voldemort, the total prize pool is now $630!

Adding $100 to the pot for a job well done on this fine event.

Inspektor_Kot
This post is deleted!
Reply Quote
last edited by
4

Any chance we can create a wooden spoon award for last place? I'll donate $0.01 to that and $5 to the main pool