This topic has been deleted. Only users with topic management privileges can see it.
last edited by Jip
3

This is a sub-topic of this topic. Please keep this topic clean and only talk about this one specific issue. Balance will not be changed - it is just an aesthetical (sound-related) change.

This specific topic is about ambient (background) sound. To prevent ambiguity, this topic is not about the following type of sounds:

To give you an idea:

To get a better idea, this is the number of loop audio files defined in blueprints:

In order to actually experience these audio files you need to turn off your music and set Fx sound to full. Slowly but surely, you'll start hearing them. My problem with these loops is how they are made.

Whenever an ambient sound is made a new entity is made. And that entity plays the sound. When the ambient sound is no longer required the sound is removed but the entity is kept. In turn, every unit can easily carry 2 - 3 additional entities because there are various ambient sounds that can be played at once.

To make it clear: the playing of the sounds is not the issue. Sound is not processed by the sim thread. The calls to the engine hurt because they are engine calls - but that isn't the issue either. Remember that the sim runs at 10 ticks a second, therefore we have 100ms for each tick

To visualize the issue, say we have a 1000 mantis in-game that are:

This means that just having the entities cached for the sound is taking up about 2 ms of the entire sim. As a game can have thousands of units that may have several ambient sounds at once it can easily eat up 5 - 10 ms late game.

To solidify the issue I kept track how often sound is being stopped with the profiler. 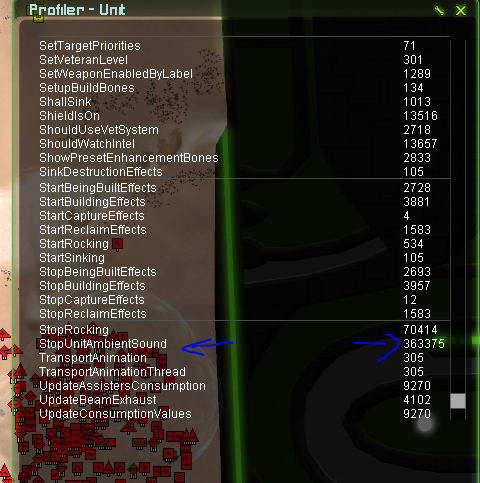 That is 363K calls to one function in a game with 4 AIx that lasted 26 minutes. It is by far the most common function called.

Therefore I suggest to have units that do not play ambient sounds at all as the game continues. For example, we could say the following:

This way there will always be some units in your army that can make ambient sounds. But, not all of them will be and that benefits the sim in the long run. We could specialize it on specific units or tech levels. For example, I think experimental units and the ACU should always make ambient sounds.

Solutions considered, but not worth it

One solution the original game used was trashing the entity when it was no longer required. This will introduce garbage that we may not notice immediately, but once the garbage collector kicks in you can get a stutter.

Disclaimer: the times are relative to your processor / RAM. It may be slower or faster on your computer, but the relative time difference (in %) will remain the same.

You could also tie the ambient sound processing to the SIM speed, turning it off when it falls below 0. We do this with a number of subsystems in LOUD (primarily ancillary video effects such as contrails, flying debris particles) but for the same purpose - maintaining SIM performance.

You could also tie the ambient sound processing to the SIM speed, turning it off when it falls below 0. We do this with a number of subsystems in LOUD (primarily ancillary video effects such as contrails, flying debris particles) but for the same purpose - maintaining SIM performance.

This seems like the most practical approach and could be carried over to other performance sinks.