Best posts made by Aulex

I just want to mention that even the some of the largest companies in the world experience problems.
I'm sure some of you noticed all of facebook's services went down yesterday because of a bad BGP configuration - https://blog.cloudflare.com/october-2021-facebook-outage/

With the amount of work the FAF dev team has been putting in and the improvements they've been adding, I'm both impressed and applaud you for it.
The recent patches that the dev team has been pushing to FAF definitely introduced stability issues which caused a lot of users frustration, but as with all software, stability is hard and always will be hard. All it takes is 1 mistake in the hundreds of changes that get deployed to cause a problem, so I simply wanted to say thank you, I and many other users understand the difficulty of development, especially for such a long standing project.

I’m convinced we should separate PC into two positions. Product manager (basically what FTX is doing now) and an actual PC who tries to create an inclusive environment and focuses on what the players want.

posted in General Discussion •
RE: Introducing Mapgen Week on Ladder 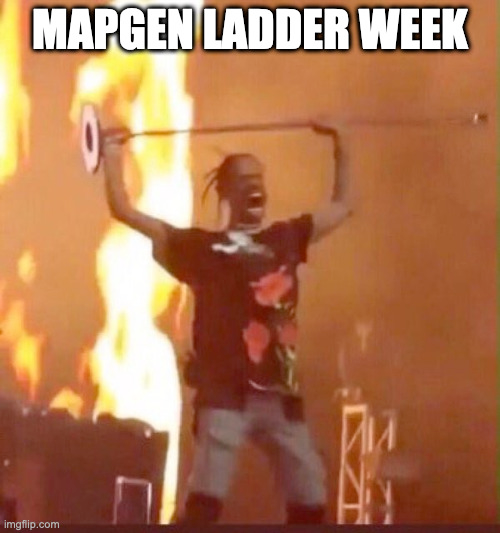 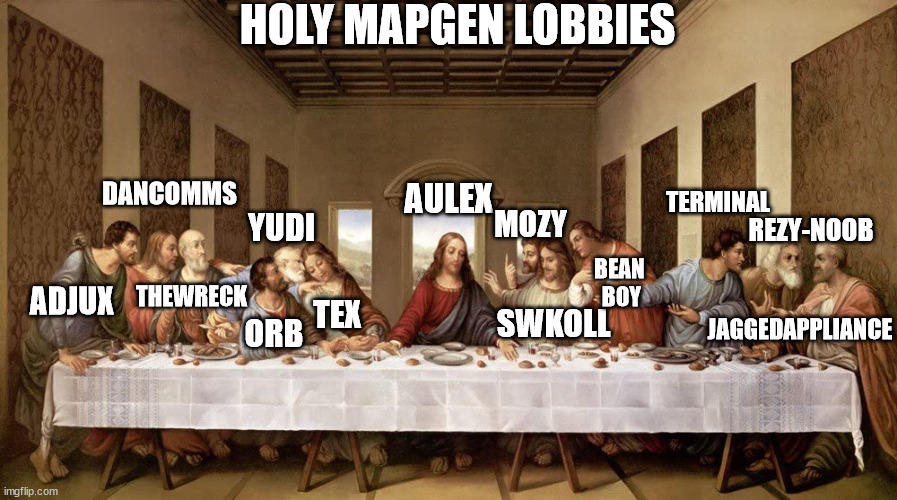 posted in General Discussion •
RE: 3D models of the characters

Mapgen
Over the last year I have worked with nobody to create a thriving mapgen community and continue to work with nobody to drive mapgen down people's throats. This is intended to give people some spice in their lives so they keep playing games as it gives people new maps that incentivize playing while also eliminating the inevitability of lame ass games.

Essentially, you will need a to accept that mapgen games are the best then begin either hosting them or playing them. Once you've accepted this you will become a better player and enjoy faf more. In addition, when you begin playing mapgen you will become of a new class of player. You can look down on those who do not play mapgen as the plebs that they are.

This in turn allows will provoke these plebs to begin playing mapgen so they too can join the elite club. Slowly FAF will become a utopia of mapgen savants.

Mapgen
I'm planning on hedging the FAFLive channel as a way to garner interest in mapgen from the rest of the community. With about 100 reliable viewers at any general point in time and (hopefully) aiming for 250-300 during this year's mapgen tourney, we should be entering the realm where sponsors may be interested in helping support mapgen events. Ideally this results in both more mapgen tournaments and more exposure for mapgen through coordinated media campaigns and connections to real world firms.

Matchmaker
Since there has been a lot of interest in revisiting the concept of polling for maps, I will completely ignore the idea and replace every map with mapgen. In order to minimize work on my end, we will never have any new ladder map rotations, mapgen will be forever.

I also plan on working with nobody to create a better matchmaking algorithm that will forcibly queue players up for mapgen games if they are not in one.

I also want to fish around and find someone to help me create a way to force more mapgen down people's throats.

Tournaments
I will be trying to fish for additional individuals to help out in utilizing tournaments as a way to promote the 2v2 mapgen games. Mainly, hosting events that are based around mapgen such as doing an invite for the top 8 or 12 players and having them choose teammates through a Captain system.

And to reiterate, I will be working on these new projects on top of the work I do in the link above. Nothing is getting dropped.

I do not take the Councillor Pledge because it is folly and the current writing of it calls for several current Councillors to resign or be replaced. Read: "I understand that if I am unable to perform these duties, I will resign or be replaced" & "I will spend at least 4 hours per week working on These Responsibilities" in combination with "avoid bringing FAF into disrepute"

I will instead pledge:

And that last pledge point will be my first action as Player Councillor.

Now, does that mean polling to gather input is bad? No. But it also doesn't mean it's the solution to every problem. Nor does it mean you need a Council position entirely devoted to it, particularly when there is no real authority to give out to the role that makes any sense.

I don't see harm in introducing a position that focuses entirely on gathering information from players, whether it be polling, chatting, or whatever means necessary.
This councilor would be the pulse of the FAF player base and provide valuable input to other councilors to drive their decision making. I don't think this will take away from any singular vision of FAF the current PC has.

Let me iterate on my definition.
The new position would be expected to maintain a pulse on the FAF player base so the other councilors can rely on them for accurate and useful information. So from this I would say my councilor definition is slightly different, someone who doesn't necessarily have authority, but has responsibilities they MUST fulfill.

The issue here is people don't think FTX are fulfilling that well enough, he's being dismissive, he's a brick wall to talk to, etc. I'm sure you've read it all.
So either he steps up addresses these complaints, someone else is voted in, or that responsibility is delegated to someone else via either a councilor position or via FTX (which I don't think he will, correct me if I'm wrong here FTX)

Does that give you enough detail for you to provide a less snarky and more constructive response?

posted in General Discussion •
RE: Suddenly, my game is in Chinese.

Latest posts made by Aulex

Some forgotten top players, such a shame our community doesn't remember the unbeatable Ziu or the up and coming Zebbo. 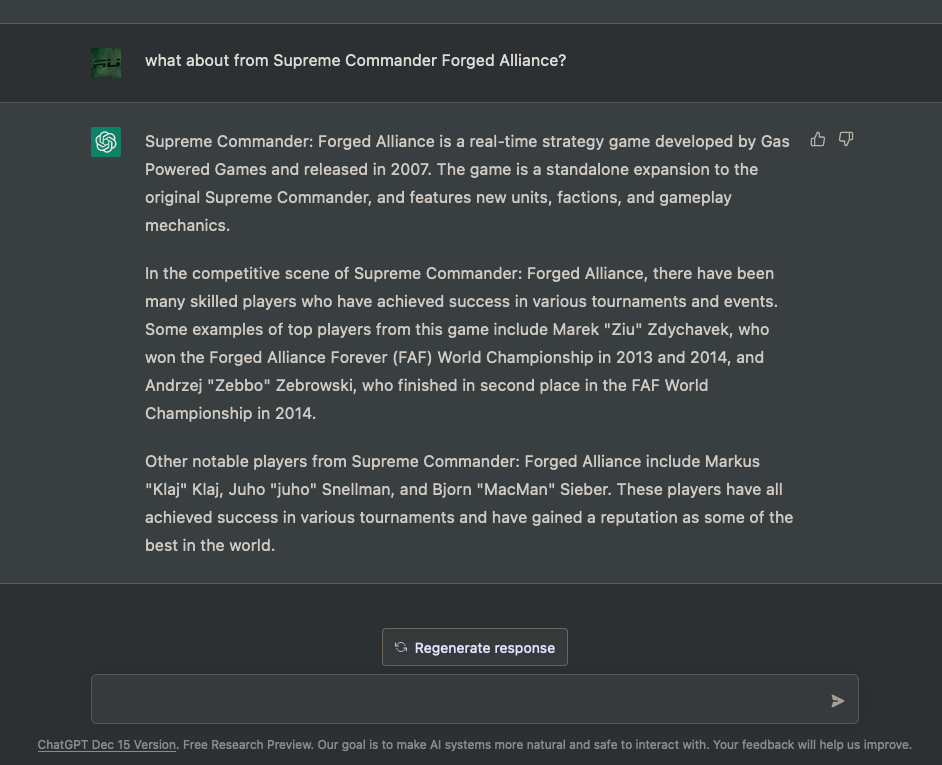 posted in General Discussion •
Is there any way to set the website theme meta tag?

As you can see in the photo the top bar of the forum is white with dark mode set for the forum. Is there a way to set it to black/grey?

A cursory search lead me to this post where you can set a meta tag https://developer.apple.com/forums/thread/683403 but I’m not sure how much control you have over the forum given that it’s not custom.

No AC allowed or else you don’t deserve the title, sweaty gamer

No clip.
The first clan war tourney. It was Gorton and I vs ZLO and I think Congreve. We knew we were probably going to lose so we had a plan, but it fell apart when gorton died. I was doing pretty well against Congreve so I thought if I could snipe ZLO I could win. I set up 2 tac launchers and fired them at ZLO. He was in an elevated position, completely exposed and not moving, so it was a sure hit. Little did I know there was the tiniest of bumps on the ground and the missiles were flying extra low today. They hit the bump, I raged super hard, we quickly lost and I learned a valuable lesson about trajectory arcs.

There are 10 ticks in a second right?

posted in Tournaments •
RE: Do not add new colors - discussion

@blackyps said in Do not add new colors - discussion:

You can personally alter the color shades if you want to do that, by creating an texturepack.nxt archive like so: 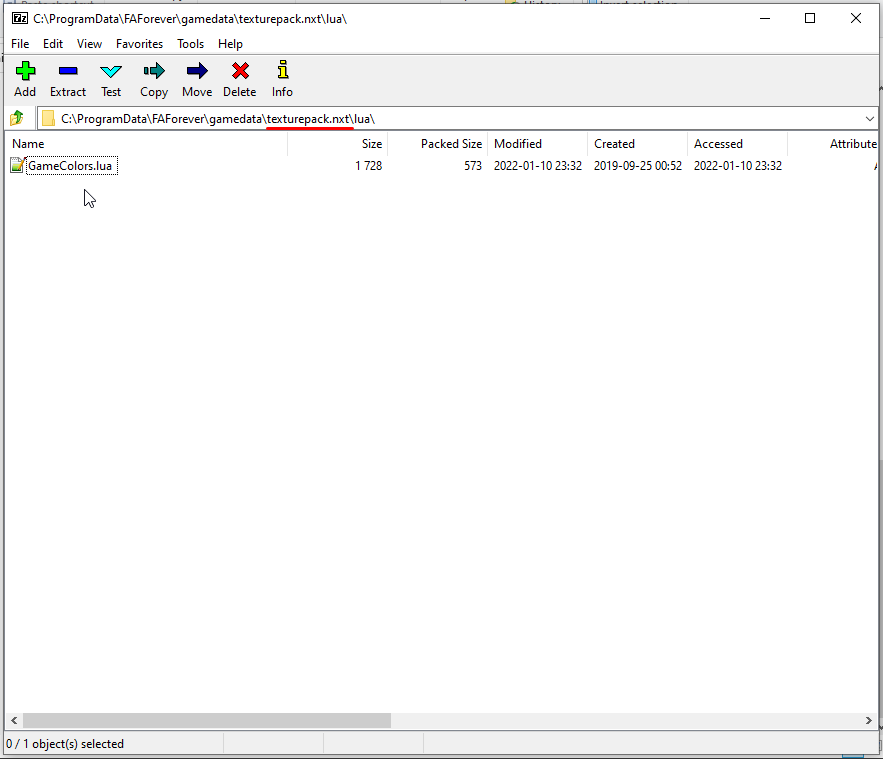 You just copy the file from your game files (lua.nx2) and then make the changes. This should be a good solution for everyone that absolutely needs his specific shade of a color available. You should just keep in mind to keep the colors similar to avoid confusion when someone calls out colors, as this change only affects you locally.

I’m a vain person, I want everyone to know that I play pink.

Also, you better not touch my pink, idgaf about the rest of this bikeshedding.

posted in General Discussion •
RE: Setting up automatch