This topic has been deleted. Only users with topic management privileges can see it.
last edited by
16
B
Blodir

Hello, I’m a long term supcom player having started in January 2013 with some breaks inbetween. I started by playing only teamgames, many of them in such glorious maps as the original Gap of Rohan and Senton. Eventually my interest shifted and I became primarily a 1v1 player. You could say that I’ve been through all the phases of fafdom, from a beginner teamgame player to #1 ladder. As such I’ve developed an understanding and appreciation for a variety of different styles of enjoying the game and am uniquely positioned to represent the playerbase. This is my application for the 2021 player councilor (PC) race. If you read carefully you might not only learn something about me, but also about the other candidates.

In the spirit of keeping the post short enough for most faffers to not tldr through, I have omitted some important responsibilities of the PC such as:

I will also try hard to represent players' voice when it comes to opinion about the balance. If you are interested and want to read more, other applicants have gone into much more detail about how these reponsibilities relate to the PC role.

Tournaments have historically been one of the main responsibilities of the PC. Previously we have seen a focus on giving the community big high level tournaments that the people who the PC represent strive to have the skill to participate in. In the current PC race we have seen a more grounded approach as candidates have proposed tournament scenes around the 1671 ladder rating range. While the spirit of hosting more mid-tier tournaments is wonderful, I don’t see why we’d stop around that specific rating range.

As PC I will be promoting tournaments for average joes that are able to reach the most people. While there will still be some beginner players that may not be able to participate, higher rating players have historically not had too much trouble getting in. Overall we’ll have a tournament scene that reaches as many players as possible.

I will also take a closer look at the sometimes contentious relationship between tournament directors (TDs) and players. Specifically I will ensure that all prize money is given out and that all players are treated fairly regardless of their relationship with TDs.

As the PC I will have direct responsibility over many things, including promotions. Social media has always been underutilized in FAF promotion and I think we are missing a great opportunity. I will be looking to bolster our social media presence with the addition of the official FAF TikTok channel. This will increase traction with especially the younger audience.

I will look to increase the faflive viewership to about 2500-3500 concurrent viwers for this year’s LotS. I will also establish the Russian, German and Finnish language faflive streams for the event.

Moderation is a subject that is near and dear to my heart since - as all of you surely know - I have a bit of a troubled past. It is imperative that each PC applicant discloses the extent of their respective criminal backgrounds. I was temporarily muted in 2013 by our rightful leader Ze_PilOt, I have been repeatedly accused of smurfing (my original account was permabanned, but everyone knows who’s behind the wheel!) and there have even been rumors of rating manipulation on Dual Gap. I know my record is not quite as impressive as the other applicants, but I hope to still qualify.

In the “Why would you have left FAF?” thread we saw just how many people feel uncomfortable with the amount of toxicity in the community. Clearly the current arrangement is not working. I pledge to take the weight off moderator’s shoulders and fire the entire moderator team. Instead I will be surveying FAF activities like a hawk over aeolus and dual gap games.

Recently we have seen a great boom in FAF developers and are in risk of having exhausted all meaningful work. As PC I will have a tremendous responsibility to make sure all of my underlings have excellent work opportunities. I will make sure such opportunities are provided in the continued development of the Python Client.

A particular issue that has haunted our community, and most players have undoubtedly suffered from, is cancer. It comes in many forms: astro, dual gap, phantomx, the list goes on. I will divert some of our development resources to launch a cancer research initiative. I’m confident that with my guidance we will surely crack this persistent group of diseases. Talks with major players in the pharmaceutical industry have already commenced. We will of course limit the supply of our cancer cure in order to maximize profits (as is customary in the industry), which will be promptly pumped into mid-tier supcom tournaments. Unfortunately many of our patients, such as astro players, may not be able to afford the treatment, but this way we will finally be able to afford tournaments for players around the 1671 ladder rating range.

The birth of FAF association will be a threat to the current balance of power in the council of Seton’s. I will prioritize cementing the lawful position of the PC as the ruler of FAF by any means necessary. If it comes down to it together with my supporters we will perform a storming of the FAF association. FAF will officially go back to being a just monarchy, ruled by the rightful heir of zep. He ruled firmly but fairly and was gone too soon. Together we will do what is right by his memory.

In the new order council seats will be determined by trial by combat performed by the applicants. Once the application period ends we will hold a series of showmatches (watch live on faflive) between the applicants. Applicants may choose a champion to fight in their stead. This arrangement will ensure the strength and stability of the FAF organization.

Thank you for reading and voting. I am looking forward to my 80 hour workweeks! Just to check that you could hear me properly I have to ask: is it loud over there?

I hope nobody was offended as no offense was intended. Seriously.

I appreciate all our wonderful PC applicants including the politically incorrect humor lovers, rating manipulators, permabanned smurfs and people who denied me prize money because they didn’t like me. I wish everybody best of luck to the PC race!

I would also like to apply for the position of chief cancer researcher in your program Mr Blodir. My experience in regards to cancer inducing game modes such as PhantomX and dual gap are second to none!

I hope to here from your secretary Swkoll soon!

@blast_chilled The committee is concerned you have insufficient experience with 64 ACU gameplay for this position.

@Swkoll This is a preposterous accusation to throw at me! If it were not for the server purges you could of done a thorough investigation of the amount of 64 ACU games i played back in 2016. I would hope that you take this to Blodir and reconsider your decision.

Damn you got me I almost fooled that Swkoll guy though!

I will take my leave.

I have been awe struck by the pure might of Blodir's application and will officially be rescinding my application for the role of Player Councilor.

With my new found unlimited free time, I will be applying for Peanut Butter Dog Lick It supply coordinator alongside Petric and Blackheart.

I pledge to take the weight off moderator’s shoulders and fire the entire moderator team. Instead I will be surveying FAF activities like a hawk over aeolus and dual gap games.

I would have expected a little tougher crackdown. Maybe just ban every person in #aeolus who has the impudence to molest us with his unimportant matters.
(I'm all in for firing all moderators of course. With the saved money we can buy more subscribers to our social media channels.)

Ah marvelous. We can finally make the dancing ACUs an official thing, after some conspiratorial elements tried to damage it's reputation!

In the new order council seats will be determined by trial by combat performed by the applicants.

I demand we follow the same rules as in Game of Thrones so that I can send somebody else to die eehh win on my behalf.

You think you deserve your thread Mr vip? Go write your application in the pc application thread like all the other good people of faf.

I will look forward to the mid round feet picture showcase.

In the new order council seats will be determined by trial by combat performed by the applicants.

(It’s scary that people think this is a legit application - and those peoples votes count as much as yours do...)

Restart rating, more tournaments • <1800, where people build Januses for 50 minutes or end with all ins / sniping each other, the big promise of 2000-3000 online on FafLive and some other moments push me away, I don't know if I should vote here.

I love you pepsi

@blodir Your love is unfounded and not legally secured. I can only confirm my relationship with Thomas and Turbo2

@blodir I will also establish the Russian, German and Finnish language faflive streams for the event.

I smell a biass here.

I can assure you biass had nothing to do with this platform.

@blodir I will also establish the Russian, German and Finnish language faflive streams for the event.

I smell a biass here.

I can assure you I do not smell.
I shower every day imperials, can you say the same?

Proxy resubmitting old moon's application, I think it still stands as the strongest out there and I cannot see it losing despite fierce competition. 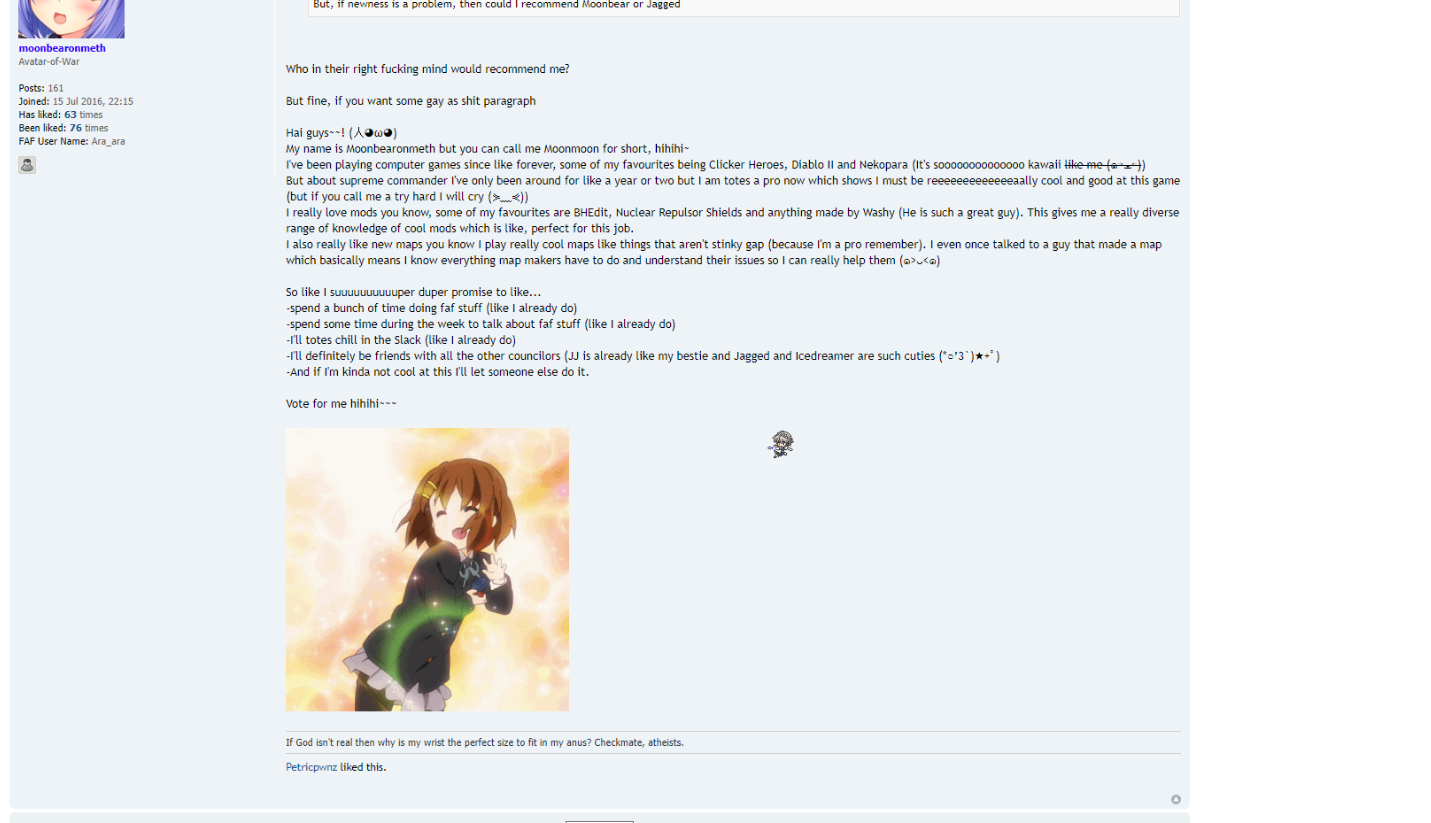 @fremy_speeddraw got my vote ez