Why is FAF mining cryptocurrency on my shit PC?

This topic has been deleted. Only users with topic management privileges can see it.
last edited by
0
M
Mr_Black_Hawk

Hello. Haven't played FAF for a while, then returned. Had to upgrade FAF to relevant version - Ok.

The issue is following: quite often FAF loads CPU permanently after I start it, which makes it quite difficult to select and join a game because of lag. Also RAM usage starts from ~500 MB and then can reach ~1 GB. My OS then tries to find more virtual memory for FAF on HDD and makes it frustrating to be in SC FA game in that moment. The only solution in that case is to force-close the client.
By the way, client itself can not be closed properly, since it's process remains in Task manager anyway. Eating all that 500+ MB of memory.

So after I upgraded FAF and experienced this issue, I reinstalled the client. It seemed to fix it, but only for a while. Sometimes I was lucky to avoid the problem, but this is not he case. Also sometimes chat is unable to connect.

Finally, today I faced this issue again and could not use FAF properly. After deleting the client I found 4 java .hprof files ~1 GB each. And deleted them too. Reinstalled FAF, but it didn't help.

Please, fix it somehow, because it really looks like FAF is trying to mine something on my PC. Also it looks like a disastrous memory leakage.
It wasn't like that before. I mean, FAF used ~500 MB RAM(which is already quite a lot for such a program), but at least it wasn't lagging. And chat was connected all the time.

Forgot to add. Rarely when loading the game, an error message appears, like "Game failed to close properly last time"(in Russian) and a textwindow with some java info. This also happened to me today and I tried to copy that java info(there were many lines of text), but the error window closed itself. I hope this is all for now.
P.S.: today FAF seems not mining anything and no memory leaks occur.

Even worse is the fact, that the launcher consumes a lot of CPU power after some time. I have a pretty beefy CPU and the launcher consumes ~8-10% CPU after at least 24 hours just for idling in the background. I guess it is running some loop threads who never exit properly and stack over time. 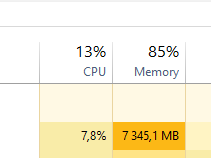 Anyway, like brutus said there is a fix on the way. I tried an initial version of the fix and it made it significantly better, not perfect, but much better.

@Khada_Jhin said in Why is FAF mining cryptocurrency on my shit PC?:

+1 to the picture.
This is actually what I was talking about - RAM usage reach 1 GB. Can not say that about 85% CPU usage though.

@Brutus5000 said in Why is FAF mining cryptocurrency on my shit PC?:

Well, it can be problematic especially in those cases, when chat is not even connected. Like just now - my chat failed to connect and FAF client is lagging. Permanent ~40% CPU usage and memory usage has already exceeded 800 MB, while I was typing this.

Any other suggestions on temporary fix? Or shall I reboot my PC all the time, and not send it into hibernation?

I mean look on the bright side, at least this way we know for sure the client can multithread

Anyway, in my case the only time it happens is when I can't connect to aeolus for w/e the reason.
The client is just trying to write down the lines about how it's not connecting until it bugs out after taking all the ram it can and starts using the CPU