Casual reminder save T1 Arty & Engi. T1 Land Mobile gets invaliated as you go up the techs. Only Navy keeps all piece relavent. Also part of Air Design*, was way air units auto prioritize targeting. So being able to throw a bomber, transport or experimental into an air fight to tank or distract enemy asf so you could catch was thing. Due to stuff like ASI changing priorities, and adding the ability to micro preferred targets. Meant its harder to “distract” enemy units.

I think AoE would be onteresting. Could result in less clumping and more spreading out. I do think thinks could be done with fuel I don’t know what through.

By and large, what would be intriguign if we see more of a dbl down on certain mechanics. If we made Broadswords cheaper so spammable jn mass to make ASF first volley “miss” be interesting. (Ghetto labs being able to shoot air aldo be cool but thag another doscussion)

This topic is no longer required - we've found an alternative and a fix for ASF battles being so notoriously slow. It will soon be on FAF Develop, make sure to get the #dev-news role on the official Discord server to stay up to date.

That's great news and I look forward to reading about it and eventually seeing it implemented!

The changes are live on FAF Develop. I highly encourage everyone to give it a try. As a host, you can choose the FAF Develop game type: 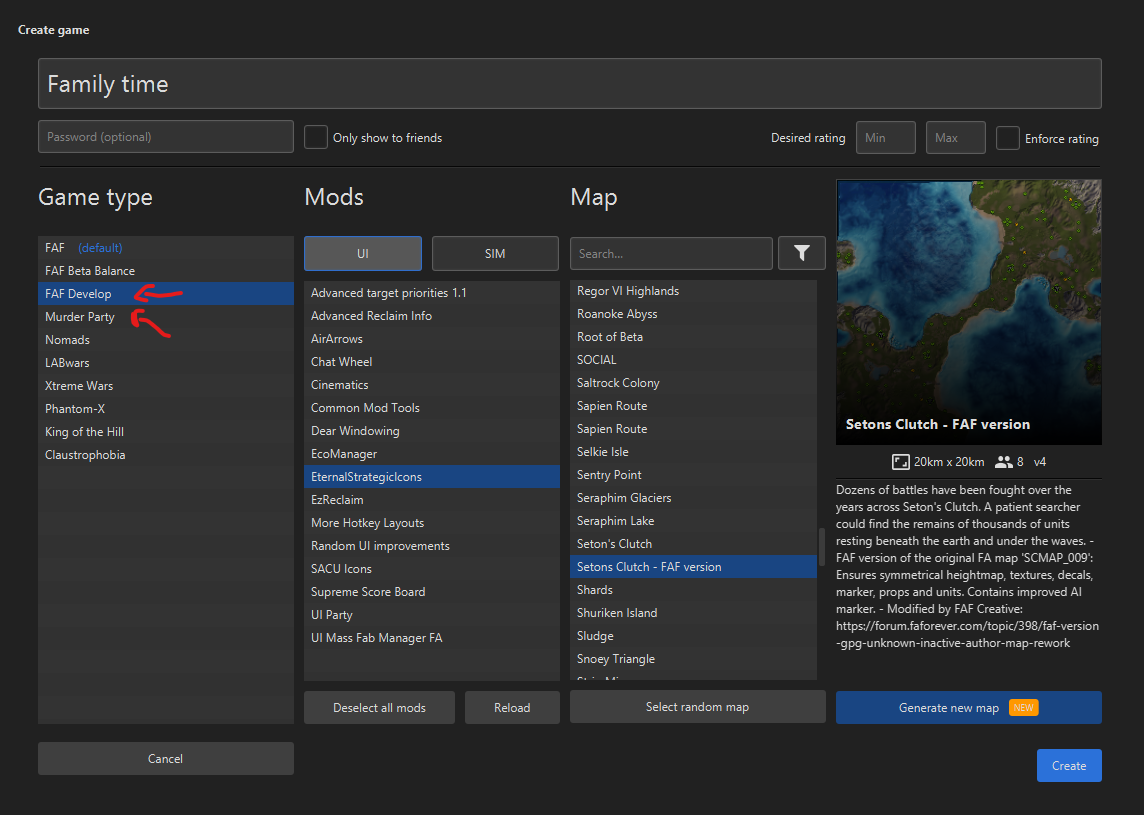 All other players will download the correct files accordingly.

A copy of the announcement on Discord:

Is it just a performance fix?

I mean regardless of how fast ASF battles are it's still pretty bad for the gameplay to just be spamming a singular unit for 20 minutes.

#realtalk ASF deathballs are really not fun gameplay. In FAF currently the air player is forced to build them or team will be strat-bombed or gun-shipped back to the Stone Age.

Pigeon holing players into only one optimal strategy is the OPPOSITE of Sup Coms core gameplay, Someone mentioned a anti air nuke earlier. That is in the right direction. We can do better tho.

ImAgine a super flak, with an aoe roughly the size of a large asf death ball but only does 10% per shot damage to ASFs with a slow fire rate. It’s long range will deter any air groups from lingering over target area but it’s large fragile and very expensive. It’s effectively an area denial defensive weapon. Keeping pesky asfs outside of the base airspace.

It wouldn’t effect balance because t3 aa would still be better/more efficient against any air unit not clustered up.

The possible downside I see is that games could run longer bc having 2x ASF would no longer be instant win air > strat death.

You might say, but wait won’t this make aa creep and effective strategy against air??? Yes it would. And FAF gameplay would improve bc it rewards taking and holding territory making the late game less static/base wars.

@omegaman said in AOE against air:

Keeping pesky asfs outside of the base airspace.
You could just remove ASF being able to shoot at grounded air units, as this would automatically remove the point of flying your ASF in enemy air space, if their units can just land to be safe.

@omegaman said in AOE against air:

The possible downside I see is that games could run longer bc having 2x ASF would no longer be instant win air > strat death.

But to counter a good snipe your ASF need to leave home and meet the bombers midway or they will drop bombs and kill you. If you prevent ASF from flying over enemy territory snipes will become easier, as your opponent has no way of preventing them from dropping at least one bomb.

@jip said in AOE against air:

This topic is no longer required - we've found an alternative and a fix for ASF battles being so notoriously slow. It will soon be on FAF Develop, make sure to get the #dev-news role on the official Discord server to stay up to date.

The reason why this topic was made has already been tackled. It can be closed - any future discussions can be done in a new topic.