Jamming ability should reset when vision of unit is lost

This topic has been deleted. Only users with topic management privileges can see it.
last edited by Jip
14

A unit with a jammer produces (radar) blips that are fake. These radar blips can be used to trick enemy weaponry. The radar blips disappear when you have vision over the fake radar blips.

This is a manual interaction that is unintuitive as it is impossible for you to know whether the blips are gone or not: they are only visible to your opponents.

The current behavior can be sandboxed using a radar, a few scouts and a few sparkies. You can switch between armies using the cheat menu. Once you've scouted the sparkies the blips disappear and they do not come back. If you disable / enable the jamming device then they are back again.

We can automatically reset the jammer once the unit is out of vision. This has been suggested seven years ago:

I'll make sure that this is done such that it is responsive, but that it doesn't impacting the performance of the game.

It automates a behavior that is only possible to do manually, without knowing when you should do it.

Jamming is not that useful once you scouted the initial unit which causes blips. Is it also possible to "refresh" the icon of initial unit once the vision is lost on it?

Aka worse stealth: you know that unit is somewhere in area, but don't know where exactly to manually target it.

Is it also possible to "refresh" the icon of initial unit once the vision is lost on it?

I'm looking into this - but that is not going to be part of this suggestion. That would be a separate suggestion once I've confirmed that it is possible

Maybe instead of having it refresh after disappearing from vision it could basically toggle itself off and on every 5-10s? Sounds like it could be easier to do than making sure unit was out of vision for a certain period of time, though again having 100's of frigates do it every 5-10s sounds like a small tactical attack aimed at performance.

But now that I think about it, it could lead to unwanted behaviour of the main units being targeted while the on/off switch is being performed and alas still making it kinda useless during actual fight as long as main blip remains a target to enemy weaponry due to the off/on loop being performed.

though again having 100's of frigates do it every 5-10s sounds like a small tactical attack aimed at performance.

The complexity (with respect to the input) is linear. We denote that as O(n) . Linear algorithms are usually a good candidate when you're on a budget (and we are).

Some of the performance improvements that we've been having is because there were operations implemented using a complexity O(nlg(n)) or O(n^2) while there was an O(n) or even an O(1) implementation possible. To give you an idea of the growth, see these graphs: 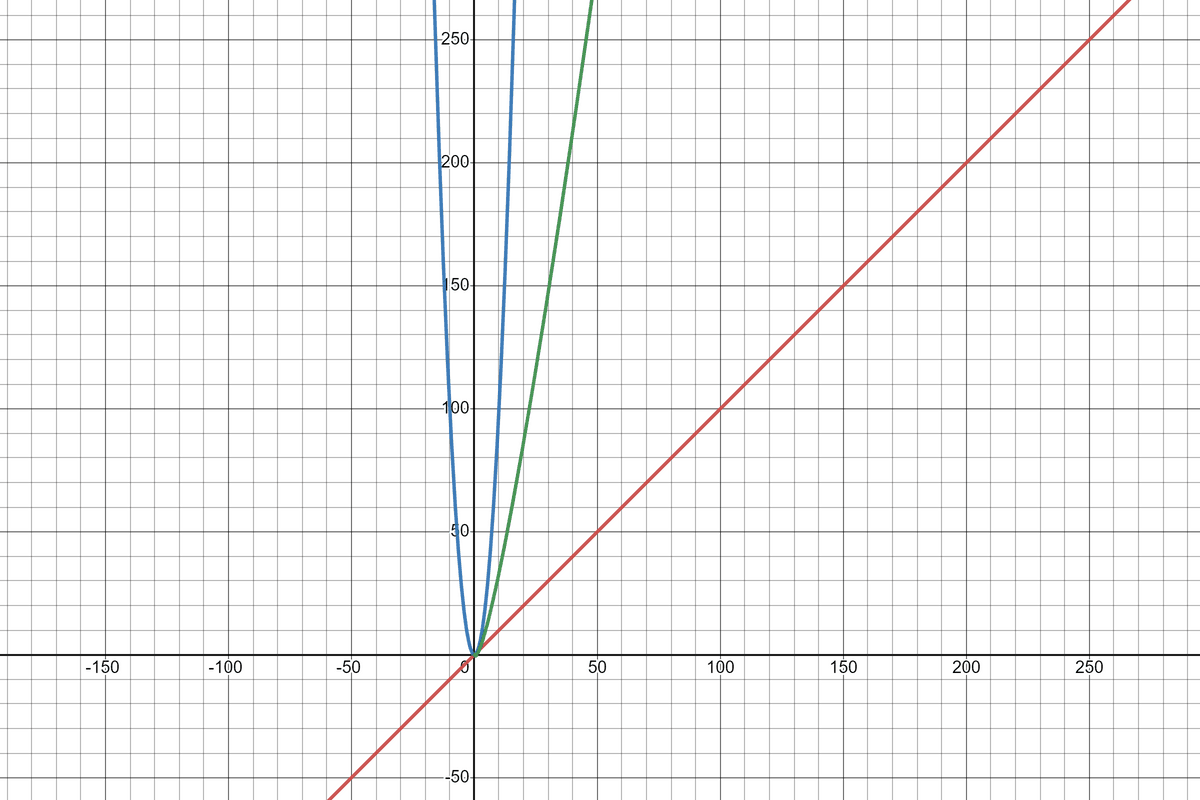 This is by all means a simplification - there's still a constant factor that can make things expensive. But jamming is not one of those.

@jip You just need to enable stealth for a couple ticks once in a while so main unit disappears from radar...

I completely agree with your statement:

Making the unit itself activate stealth for a split-second would cause the main unit's blip to be reset into an unknown unit's blip - which would be awesome! That would be a great buff to Jamming!

Though, honestly, Jamming could use a rework entirely. here are some of my suggestions:

Yes, I know some of these suggestions are out of wack and/or without base - but, honestly, at this point, I'd take any small buffs for jamming. I love the UEF faction!

I have played over 1,000 games with UEF solely. So that either makes me one of the more experienced players to say this (or it makes me superly biased): but to say that UEF Jamming sucks, that's an understatement.