Sacrifice works on a ratio of mass/energy. 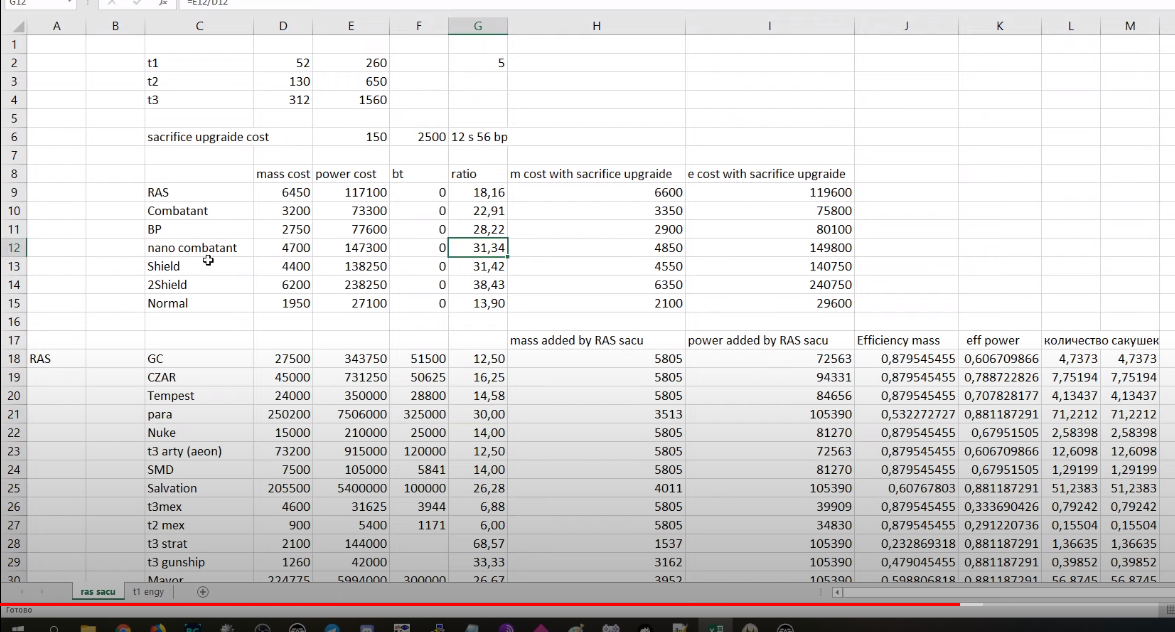 This table from ZLO explores the efficiency of using RAS boys.
For the most part RAS sacus are around 90% efficient.
Engineers (from memory) are usually around 60%.

Engineers have 0.6 sacrifice efficiency multiplyer
sacus have 0.9
that means that thier maximum theoretical efficiency will be 0.6 and 0.9

Edit:
However if you sacrifice on something that costs 180 mass and 90 power then you will have 90% mass efficiency and 45% power efficiency witch is kinda acceptable.

Wouldn't it be more intuitive if sacrifice added buildpower to the engineer? Results would be similar but it relies on the players regular eco skill.

Let the engineer add their own build time to buildpower, suggestion: When sacrifice is activated the units buildpower is increased by 1/10th of its buildtime for 10 seconds.

Example: (T3 engineer costs 2100 buildtime.) A T3 engineer goes from 15 to 225 buildpower for 10 seconds. Then the engineer is killed and leaves a wreck.

If we did it that way @Valki you would get zero benefit from sacrificing while you are mass stalling or e stalling.

@arma473 but it is much more useful throughout the game T1 to T4. If you overbuild engineers you can 'reclaim' the used buildpower (and later the mass through real reclaim)

Tele-GC is gone, but now a T3 engineer can spam up 10 T1 land factories in seconds for a proxy-LAB attack. It opens the door for many interesting proxy and localized rush options. Don't do that if that wrecks balance come to think of it.

The sacrifice system could use a splash (or flood) of simplification so new (or experienced players who aren't math geniuses) can figure out what is happening.

The current mechanic makes it very hard to balance this for most use-cases i think. I suggest using fixed mass/power conversion rates to convert all mass/power of builder unit into target unit.

So lets just say we use (example values)

With the old formula, the builder would have had 0% efficiency because it did not cost energy so it would not contribute a single point of mass or energy during sacrifice.

With my idea we could balance both conversion rates to make it usefull to sacrifice builders into both mass and energy expensive units/buildings. Of course the conversion rates need to be so bad that sacrificing does not replace actual economic buildings like mass fabs or power generators.

Even if conversion rate was highly efficient, I don't think people could spare the APM to manually sacrifice all game if they, for instance, wanted to not build power generators. Aeon is already micro intensive enough that it wouldn't be an issue.
That said, your idea @Katharsas is already far superior (IMO) to the current mechanic.

In FAF there are already balanced sources of Mass to Energy conversion (Mass Fabricators) and Energy to Mass conversion (Mass Extractors). Sacrifice could use these ratios from those structures (at say the T2 stage) to balance resource conversion per say.