One more for now because why not? I would like to hear you guys claim that "no one but Morax says this and that" a little more and we can continue to debate this. Win the election or not, people are going to start seeing in totality what they think of how you handle their game. 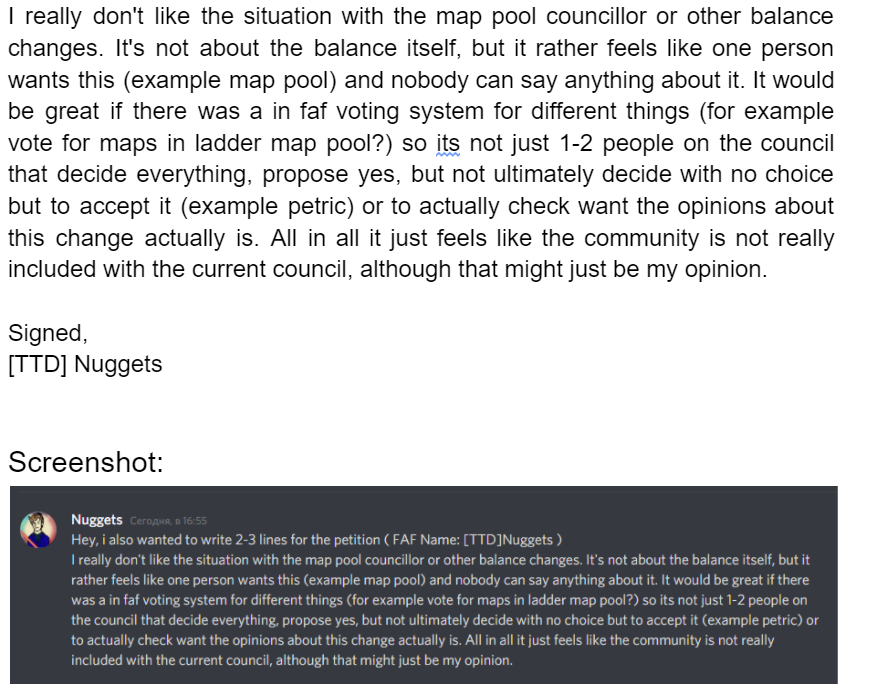 So for all 3 (more so Thacon and Morax): We all love polling and all love opanions. But like (whatever part of anatomy you prefer) everyone has one.

As PC:
If you found playerbase irrovacably came out against a change (like this mex change. Now we can debate pedantics of this but tje balance can point to how Underpowered folks feel T3 is. And argueably easier BP accessibity gets T3 deployed faster. You no longer need T3 Engineers etc (which ironically requires T3. Its a vicuous cycle)).

You go to the balance team, or its councilior Petric. Or whatever how will you convince them?

Screaming and Shouting go as about as well as recieving coal for christmas (which piece of trivia was originally good thing. But that random historical factoid). How would you approach Petric?

I will convince the association they have reason other than themselves to remove them as they are not doing what is in the best interest of the community.

It has been long enough they get away with doing whatever they please and shooting almost everyone down.

Lots of those quotes have entirely wrong information.

Why was the community not involved in choosing someone among those players that are on the balance team? How come they did not have to present ideas?

Frankly FTX, I think Morax's posts do a great job at showcasing that the system needs change. Whether people vote for me or for Morax, they are voting for change.

In regards to your toxicity:

-from the public official FAF Discord... what a wonderful Player Councilor

Yeah, I stand by that quote. A dude permanently banned from FAF for smurfing, toxicity, manipulation, etc that has now been given a permanent forum ban is a roach and should have been removed from the election day 1.

You being elected PC gives you no ability to do away with balance team, restructure council, or introduce anything of the sort here. All you’re showing me is that you’re a force for contention and stagnation rather than working to make FAF better.

To be a member of the balance team you get democratically voted upon by a collection of reasonable high level players. The team is a collection of the highest concentration of game knowledge possible. If you can add to it, then ask to join. If you can’t, make a decent forum post and I or somebody else would link it to petric.

Whether or not the PC has direct power over those things, the PC can have substantial influence. I’ve already spoken with the president of the board (among others) regarding changing the FAF leadership structure, and changes ARE coming. As PC, I would be positioned to smooth and guide those changes in the best interests of the overall FAF community.

@RandomWheelchair it is only pathetic now because I do not think you really play the game much (as you told me) and do not engage with it as much as daily players. These issues may not bother you as much as other people, so no, it is not pathetic to some.

Which is kinda funny, cuz I'm still more active here and on discord while also seing other way more proactive people who are helping out others before they actually get poked to do something like Mr.emperor here.

The whole posts replying to valki reek of nothing but a PR stunt done only cuz this was the moment in which he could profit from doing a big ass reply to show off how much he cares. When in reality he never gave a fuck to give him a proper answer before he started running for the PC. Just look through the threads and you will see that he never bothered to reply. He only did so when it actually was profitable for his own agenda to make a big public statement how much better he is than the rest.

Which is, well, pathetic in my eyes considering I see all the other folks actively contributing without having any kind of agenda just to see this dude pull out this PR stunts.

I think FAF needs someone new and that would push for change. Keeping the same pool of people in control causes complacency and stagnation. He has played the game for years. He understands the game and the players base. He also is one of the main creators for random map gen.

I think Emperor_Penguin would be a a great choice for PC.

@randomwheelchair @FtXCommando
To answer your statements/questions:
I have done a lot of things to make FAF a better place (ie: improving the map generator, making maps, making mapping utilities, making new props, answering other questions, training noobs, working on code, etc), and it is obviously not realistic nor my job to respond to every random question asked on FAF.

I responded to Valki now (rather than earlier) because he directly invited me by name to respond to those posts yesterday (and not earlier)... I generally try to respond when someone basically asks me a question and @'s me, as I think that's the decent thing to do...

So basically you really do mean to say that you didn't care to help him out before you literally got outed to do so and then recognised how good of PR stunt it is to make nice big reply to him in this part of forum.

Well, who would have thought to actually go and help out the poor dude before you could profit from it.

@randomwheelchair
No, actually, I had already talked with Valki in pm and helped him with some stuff before I was even planning on running for PC.

I don't really understand this whole fuss about balance team in the PC election? Like it's not up to PC to decide about balance nor who is on the balance team ... also you posting random screenshots showcasing people angry about balance and map pool is completely useless and proves nothing. It's balance and map pool, there are always people that are unhappy about them no matter what you do. Another thing is this weird idea that "oh the balance team is not doing what's best in the interest of FAF" yet it consists of players that understand FA gameplay the most and are most qualified to make adjustments to said gameplay so am I missing something? You want to make polls about balance, sure go ahead its results doesn't matter cause 99% of players don't understand gameplay well enough to make informed decisions about it and most of them will just base their responses on personal preferences or something they struggle with.

Tbh I just don't see anyone being able to replace Ftx and gather enough supporters to replace the current people working on the pools etc. While changing how the system works etc. And if you are not gonna change that then what are you bringing in the first place? The only real competitor is Morax since nobody else has big enough track record of contribution to even run for the PC in my opinion.

Why would anyone want FTX he has already shown himself in the official FAF discord as an arrogant douchebag "roaches need not apply". Its an open election and anyone who actually cares about the community's wellbeing would not say that. He acts like he already has it in the bag. He shows himself to be ignorant and a jerk. The single comment shows this.

With all due respect, you have no idea what you’re talking about.

Could you expand on how I have led FAF into stagnation? That’s an absolutely fascinating accusation in my opinion.

Player size, prize pools, ladder participation, quantity of casters, my patience, I genuinely can’t think of a single thing that hasn’t grown over the last 3 years.

Anyone remember the old “why is the competitive scene dying” thread from 2017-2018? Kinda odd it hasn’t had a retread on these new forums, yeah?

seems you have been ignoring that statement.

Yeah, I stand by that quote. A dude permanently banned from FAF for smurfing, toxicity, manipulation, etc that has now been given a permanent forum ban is a roach and should have been removed from the election day 1.

I dont see any issue with your quote posts regarding balance morax. Almost all of them are either wrong, irrelevant or simply their opinion.

community voting for balance team members is a terrible idea especially since it wont accomplish anything. How many people of the balance team should be elected? Majority minority or equal? You think there wont be issues of the majority 'team' dominating the decisions cause they are likely to disagree with the opposing team? After all the chance of people being voted in have a high likelyhood of disagreeing with the current state of balance.

I dont see any major discontent with balance either. Compared to 4 years ago the game balance has become a lot better.novaxes were useless, mongoose were, janus blazes aeon bs czar titan. The big scathis rework happened. Tons of units that were too strong or weak got changed in a favorable direction like aeon destro, frig, tempest, loya, wagner, mantis, chicken, aeon and sera gunship, etc etc. Keep in mind that most of the balance team has been the same since then so it is worth talking about it.

Tex complaining about not focussing on the right decisions: Why isnt he joining the team and working on them then? Balance team is actually drastically in need of manpower and tex would in no way be denied on the team if he wants to join. Doesnt mean that his ideas will get implemented if he does it, since he would need consent from the other members, but i see no reason why he wouldnt join but complain instead.

About sladow complaining about making factiond more equally: why do you think thats happening? And where? Scathis is super unique, czar was made unique, chicken micro change made it more unique from gc, wagner was made more specialized, beetles fit better in cybran theme now (whether u think theyre good or not). Recent lab changee made labs slightly more unique too. T3 rebalance buffed snipers so that aeon/sera t3 gameplay would be more different than uef/cybran. If anything i see the opposite happening.

Whiteowl complaining about certain factions being too op is quite funny since 1) this was way more of an issue 4 years ago and 2) even a game like sc2 with a paid balance/dev team cant get it right and accidentally makes factions op every now and then. It is simply in the nature of balancing.

All in all i dont see a single concrete point being made.