This topic has been deleted. Only users with topic management privileges can see it.
last edited by
0
E
Eclavaldra

First off, my apologies if this is old ground or the wrong place to ask the question!

This is the first time I've loaded up the FAF client since what has evidently been a substantial re-work; when I was last on there was at least one (excellent) fan-created, complete, multi-map campaign playable in multiplayer. I can't find it now, nor can I see where there might be others. Any suggestions gratefully received!

Go to the coop tab in client

Perhaps this should be one of the FAQs. Here is my info about it:

The campaign missions are started from the "co-op" tab.

You can launch a co-op lobby from the co-op tab. Obviously, when you launch the lobby, you're the only human in it.

From the lobby, you can edit the game's options (increase or decrease the difficulty, or other options).

You can launch the game from the lobby even if you're the only human player. You don't need anyone else in order to play a "co-op" game. You can let people join your lobby, or you can put a password on it to keep them out.

You won't have access to the pre- and post-mission briefings or cinematics.

Sounds like he's talking about galactic war not coop?

Sounds like he's talking about galactic war not coop?

If you need a guide on how to use the ui, doesn’t the ui just suck?

Might want to rename the coop tab to campaign. It can be done solo anyway

If you need a guide on how to use the ui, doesn’t the ui just suck?

The UI sucks, everybody knows it, no one wants to fix it.

There have been a few occasions over the years where someone has decided the coop tab needs a rework, but the effort has thus far always petered out.

How would You chaneg the Current UI for Coop ? what would be a better UI for what is currely thier ? Ive just recently set up the Java client so i could have a messaround with could be somthing i could look in to.

@Rowey That is a good question. I can’t really answer it but can tell you some issues with the current ui.

Also have a look at these issue, some of them should be pretty small things that might be good starter issues. https://github.com/FAForever/downlords-faf-client/issues?q=is%3Aissue+is%3Aopen+coop

Hosted lobbies need to show what has a password

How would You chaneg the Current UI for Coop ? what would be a better UI for what is currely thier ? Ive just recently set up the Java client so i could have a messaround with could be somthing i could look in to.

Basically take all parts of the Coop UI, put them in a mixer, and what comes out will be a better use of screen space then what we have now : )

is a Leaderboard evern nessasay for the Coop- missions ?95% of the time is busted anyway

Its a nice idea in theory to have coop leaderbords but in practice they are broken 99% of the time in one way or another, and if you just move them somewhere out of the UI space until sombody takes the time to properly re-integrate them i would be fine with that. Could put them behind a button or leaderbord tab or somewhere else for now.

So currently this is my First Draw for what the Tab Ui iself could look like this i via Intelij so dose not look pritty but give you an idea. 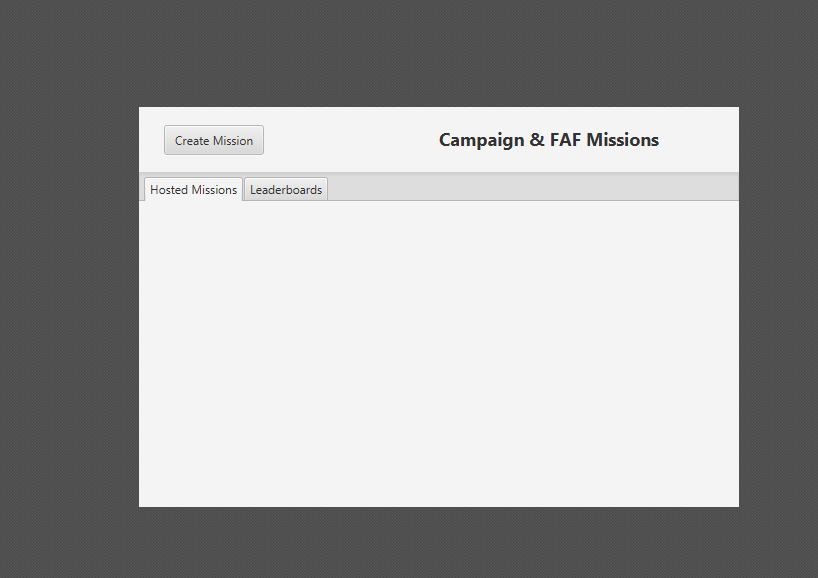 Im now woking on a Ui mockup of using the Create Mission button to have the pop up like in cusome games.

@rowey the popup should have some way of organizing the missions

either have two lists, first the "group" and then the mission, for example: first you pick between "Aeon Campaign" "UEF Campaign" "Cybran Campaign" "FAF Campaign" "Seraphim Campaign" or "Special Missions," and then based on your choice, it lists those missions in a second list

or just have one scrollable list, but the list itself has the missions organized by category. So instead of just listing the names of the maps, it would be something like:

I don't know if the "difficulty" setting is still causing problems (defaulting players to a hard setting, then they don't know why the campaign missions are so rough). If it is, consider having that be part of the popup. So every time you're going to launch a mission it has the difficulty showing.

Also, is it possible to track/show on the dropdown mission list whether the player has completed each campaign mission? It would be nice if it showed that, so people would know which missions they haven't done before. That would be a subtle encouragement to try out the various missions. Or even to show the difficulty setting that people finished it on. Which would be an encouragement to try harder difficulty settings for the missions.

via Intelij so dose not look pritty

Plan out your ideas in paint or something, don't waste your time spenting 30 minutes trying to make basic layouts and don't spend so much time working on something that might be bad that your time investment makes it irreversible.

Doing this is frankly cringe. I've seen this in a couple other games and it caused major issues.

Hit select map, and click on the map preview under the relevant faction header when a dialog pops up
the preview has ofc, the name and mission number and is placed in order.

Just move the Leaderbords to the leaderbords tab. We should imo stay consistent with our own tabs, even if that means you have to make an additional click ere and there. And having 2 additional nested layers of tabs below the top is imo a bit ugly.

When somebody decides to do a proper concept how to reintegrate the leaderbords in a per mission way, we can always move them back.

Plan out your ideas in paint or something, don't waste your time spenting 30 minutes trying to make basic layouts and don't spend so much time working on something that might be bad that your time investment makes it irreversible.

I disagree. Eventually somebody needs to put the design into the ui language of the client (FXML), so playing around with it is never a waste of time.

Trying to play around with the controls and trying to build a formidable ui is probably not the approach to the best solution possible, but it's very close to end up in the client and can lead to an improvement. Also it gives you a rough understanding which controls exist and how to use them.

Whereas painting the ultimate ui on in any kind of painting or layouting tool doesnmake the same thing happen in the client. You still need to learn how to do it or wait for the magic unicorn FXML designer to show up and do it for you, but for now nobody has seen the unicorn.