This topic has been deleted. Only users with topic management privileges can see it.
last edited by tatsu
6

All of this applies if you have either a single monitor or more than one monitor.

This guide will go over how to setup a fullsreen script that both makes your FA run in windowed full screen (AKA: fake-fullscreen) and optimizes FA in order to gain a bit of performance.

There are multiple versions of the script depending on your monitor setup, and whether you just want the windowed fullscreen, the optimization, or both.

I’ll just give you the baseline and then step by step it so you can meet your needs.

The Run, %comspec% bit is the part you can remove (two lines) if you’re not interested in the optimization.

(Example with two 1080p monitors that are ordered left to right you’ll need to adapt the pixel sizes if your monitors are a different resolution than 1080p, note that FA is now a window so it can’t stretch it’s bottom border two different amounts, if you have different resolution monitors one of the two monitors will not be completely filled.)

The breakdown, for those who like understanding the nuts and bolts of what they use :

I use autohotkey (AKA : AHK) as a scripting language here because AHK has absolutely no performance hit on your system especially in the case of this script and if it’s the only one.

The first couple lines set our variables namely the process name that we’re looking for (E.G. « ForgedAlliance.exe » . Yes, this does imply that simply by replacing this you can get the same full screen effect on any other game or app).

Then we tell it to disable the window border,

Then we tell it to minimize,

Then, in the first example I listed, to maximize (which when you don’t have a window border means the entire screen) ( in the second example I listed I set it to the combined dual monitor resolution)

The optimisation bit is something that works for FA for the following reasons :

This combination of factors means that moving FA main thread to another thread, any other thread, yields overhead that you aren’t otherwise getting.

Right, so you could just open your task manager after launching a game, find FA in the details tab (not the processes tab) right click it and set core affinity and remove the checkmark on the first core and apply.

Well this was a popular thing to do by hand but I found it tedious so I automated it.

This was a bit tricky as normally no non-admin process could modify other threads in this way. But I found an old archaic Microsoft system32 tool, crudely named « Process » which you can pipe a process name to plus what you want it to do to it without requiring any privileges of any sort. Neat. #justwindowsthings

So I use process. Why do I place it in system32? Because that’s the equivalent on windows to adding it to the path suddenly when AHK makes a console call (Run) of that name (process) it is found. Perfect.

So what is this 1110, 111111111110 deal? Process takes ones and zeroes as arguments for its thread affinity parameter. One means « use thread » zero means « don’t use this thread  ». For whatever reason they are listed backwards, this is why the zero is last (we’re trying not to use the first thread). Ok so how many ones do I put? As many as you have threads on your CPU minus the last one where you’ll put a zero instead, an easy way to check is to open task manager and right click on the cpu graph and select « show logical cores » and count the graphs.

In the second line that calls process I do something else, what is that? Yes, I’m also setting FA’s process priority to high.

For 99% of apps this does ABSOLUTELY NOTHING. But for some reason FA is apparently not already getting a fair shake from window (8 and up (that means windows 10))’s task prioritizer. Weird, I know. We take those.

There now you understand the whole fullscreen/optimisation script.

AHK gets flagged as a hack/cheat/bot by Black Desert Online’s anti cheat software!

Uhm, if you’re letting rootkits onto your computer, you’re fucking yourself already, I can’t help there. Don’t play games that impose rootkit software as an anticheat, this needs to be intergrated into gamer culture. That these rootkits are « official » rootkits does not make it any better and it calling AHK « a cheat » is really the pot calling the kettle black considering rootkits are malware.

what’s the Linux step by step

Well the whole core optimisation thing is moot since Linux abstracts away threads and doesn’t « order » them or « start a process on a specific thread ». The overhead and prioritazation are also moot because you’re not emulating a full windows, just the parts you need, and lastly the windowed is moot because the emulation plus whatever DE you have basically kinda result in the same result. There’s only the multiple monitor thing I would be curious to know how to do.

Hope this helps thousands of people!

I have 2 monitors. Is it accurate to say that if I use "fake fullscreen," I have to choose between "treat both screens together as 1 monitor" or "just don't use your second monitor"?

Without using fake fullscreen, I am able to use my second monitor to display the map (like having a giant mini map that I never look at because my first monitor is so wide that it takes up all my vision anyway).

you just use the ui party mod as stated. you'll see it's ideal. and the screens truly behave as two independent screens even though you're in fake fullscreen.

you just use the ui party mod as stated. you'll see it's ideal. and the screens truly behave as two independent screens even though you're in fake fullscreen.

According to that thread, I'm supposed to use UI-Festival instead of UI-Party. Do you know if that's true? So I have to get UI-Festival through github because it's not in the mod vault.

the point of UI-festival the way I see it is only if you have two screens of different resolutions.

if your two screens are of the same resolution UI-Party is the one for you.

one is landscape, the other one is portrait. So it probably just won't work for me. I'm doing okay without fake fullscreen so I guess i will just stick with that. Thanks for your help though.

Is there a benefit to doing it the way outlined in the OP over using an app like Game Companion?

@arma473 well that's where you would need UI-Festival.

anyways it's up to you

There are multiple versions of the script depending on your monitor setup, and whether you just want the windowed fullscreen, the optimization, or both.

This makes it seem like you shouldn't need fake fullscreen for the optimisation. As it is, I couldn't get the fake fullscreen to work this way for some reason (probably user error) so I will just switch back to what I was doing before I guess.

Just so no one has to look for it, from the prior thread, here is the script given if you want to use AHK for optimization, without using it for Fake Fullscreen. There are other examples of scripts people used in the prior thread (https://forums.faforever.com/viewtopic.php?f=2&t=9778)

yeah I had that too.

it's space sensitive for where it begins and ends the loops.
mine looks like this : 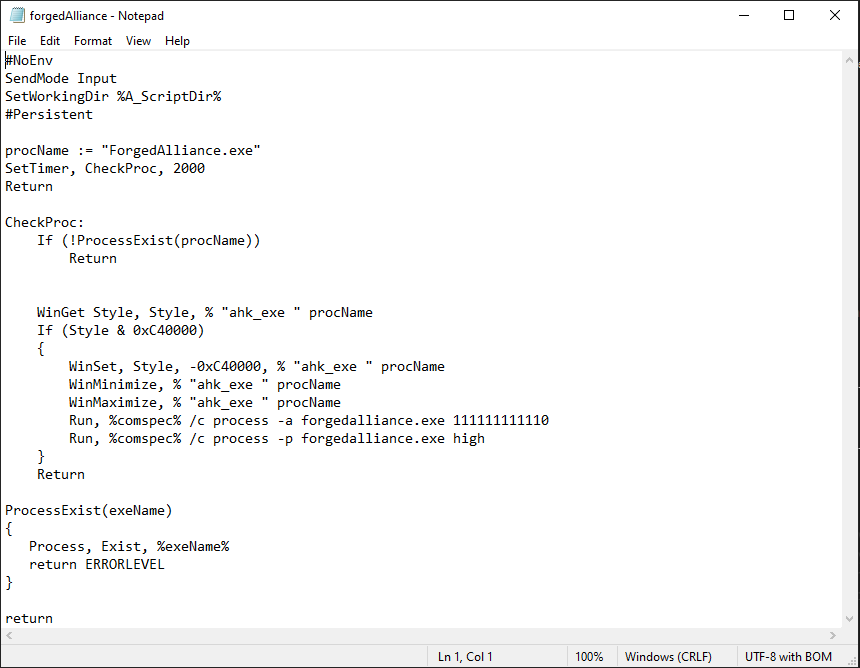 Can the fake full screen / multi monitor thing be done on linux?

Can the fake full screen / multi monitor thing be done on linux?

I don't think so.

I gave up but if you find a way let me know!

what’s the Linux step by step

ok worth a shot ig. Ill let u know if I ever figure it out.