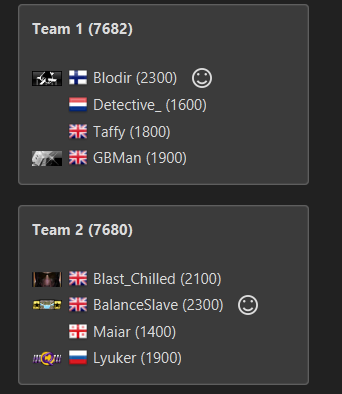 When you notice something like this, please try to ask the participating players if there were any premades. It's not stored anywhere, so impossible to look up later.
In this case I believe that there were some premades, as with you instead of the 1400 the game could be 0.23 (units of game quality. Not the game quality displayed in the client) better, while a single person in 4v4 can at max build up 0.05 time bonus.

For the record I was not in a premade.

@blackyps yeah my bad i forgot to. i just assumed the 1400 wasn't in one because i've never seen him before lol

me and blast were not in a premade

@BlackYps BTW now that I finally have access to the server logs again I think we can find out what the parties were for a particular match with a bit of digging. In this case it looks like everyone was searching separately, but I think you already identified the issue.

@Askaholic what issue have I identified? If Maiar and Lyuker were not premade then something funky is going on

@BlackYps Oh I assumed your PR to cap the new bonus was related. I’ll send you the info on this match though in case it helps with something else.

That PR was actually not related to this specific match

Nobody was teamed up with the 1400, but it choose the 1400 to match in the game even though i was searching for longer (he matched in a previous match too that failed to launch, unless that somehow saves the total queue time).

Didn't ask everyone but i know everyone well enough to say that i'm 99% sure the only party that existed was macro/rezy together.

Not sure if i missed something

game id pls, so we can search the logs

Just going to tie these two threads together here: