This topic has been deleted. Only users with topic management privileges can see it.
last edited by
1
B
Broker

A handy feature has been added recently. Select and add the nearest free engineer to the group. This is an awesome feature.

But there is a significant drawback.
The function adds an engineer of any level to the group. It is very uncomfortable.
I propose to change the work of the panel of engineers. 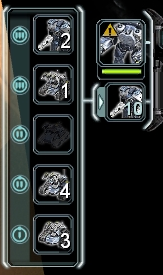 I think it won't be very difficult.
This will be an awesome feature. Will greatly simplify construction management.

I see merit in this, could you make [an issue on Github] describing the feature?

Thank you for your attention.
The developers of the game drew attention to me. this is great.
I would like to take this opportunity to ask you to make some more changes.
Change the priorities of the fat man's attack.
The first one is experimental.
The second is artillery.
These are the biggest threats to this unit.

Or someone can make an addition to the game for this. I can not. I wrote this wish in the modification section. maybe someone will do it.

I would also like to ask you to consider the following.
A long time ago I wrote an appeal with proposals to change the balance.

I understand that the proposals are too revolutionary. Especially the developers don't get paid from working on the game.
But I think the problem exists.

Maybe something small can be made.
For example, change the firing range of mobile artillery T3.
And add mobile protection against nuclear missiles.

There will be a problem with the artillery of aeon. It can move and shoot. It will be difficult to deal damage in this. But I think you can somehow solve this problem.

Epic artillery duels will take place. It will be possible to fight with bunkers. And you can't sit at the base building the Mavor.

This will be a great experiment. How the game and the actions of the players change, how they change the actions.

This is great. And so in the game nothing has changed over the years.

Change the priorities of the fat man's attack.
The first one is experimental.
The second is artillery.
These are the biggest threats to this unit.

You can change this yourself by adjusting the Advanced Target Priorities mod and then change the priority accordingly in-game.

I understand that the proposals are too revolutionary. Especially the developers don't get paid from working on the game.

But I think the problem exists.

I'm afraid that this is not up to me, and even if it were, there are more important matters for me to solve at this point. Such as the performance issues of the game.

What are the opinions of the change in the original post? I'd like to hear some pros / cons.

IMO, it won't be used, if you use hotkeys then you don't move your mouse over to that panel so I don't see this as beneficial cause it would be used probably by 1 or 2 players only.

@tagada You need 3 buttons to select different level engineers. It is a lot very and uncomfortable. Icons are already on the screen and do not use them. Because they do not work as needed it is not necessary.
For ordinary players it is very convenient.

I think you need to be oriented on ordinary players otherwise, the game will be not popular at all.

Change the priorities of the fat man's attack.
The first one is experimental.
The second is artillery.
These are the biggest threats to this unit.

You can change this yourself by adjusting the Advanced Target Priorities mod and then change the priority accordingly in-game.

I understand that the proposals are too revolutionary. Especially the developers don't get paid from working on the game.

But I think the problem exists.

I'm afraid that this is not up to me, and even if it were, there are more important matters for me to solve at this point. Such as the performance issues of the game.

I think you have much big problems than:

-99% percent of games on DualGap

-lack of a game development plan

I follow your project for 7 years.
And I always thought that you have access to the source engine game. Having read your messages I understood that there is no.
It is very bad, just awful.
You can not fix anything and change the best. No development. So there will be one core, etc.

I think you need to stop afraid to change in the game. Stop global heavy tasks. Discuss with society the translation of the project to the modern engine. The engine, which will develop, because his creators have money for it.

Alright you baited me. For a dude that has been following the project for 7 years you sure don’t seem to have any idea about the project. Let’s break down each point.

“Bad balance”
Balance is taken as a given to players. Players have the ability to “organically” impact balance by designing maps which act as restrictions and multipliers on the tools of balance as they currently exist. Balance is not designed for dual gap. Balance is not designed for sentons. Balance isn’t even designed for ladder. Balance is designed to ensure that the game has a healthy ecosystem on maps that follow traditional mapmaking practices. For a long time, this meant all you could really use for balancing was ladder because it was the only area which enforced some quality standard on maps. With new matchmakers for higher player counts , it should allow a wider range of valid inputs for balance considerations.

So no, changing balance to make dual gap have a vibrant meta is not a good plan. It was made by players and is played by players specifically because it is restrictive and follows a simple meta that is difficult to break out of. It’s comfortable, pure and simple. Make it uncomfortable and people make dual gap^2. If you really had 7 years in the project, you would be aware this is why tons moved from gap to dual gap. Gap had significantly more aggressive “cheese” options ranging from early air snipes, base donations, t4 rushes, tml snipes, and arty drops.

“99% dual gap”
Just objectively wrong. Dual gap isn’t even the most commonly hosted map on FAF. Currently, it makes up like 12% of launched games I believe. Might be 15% if you combine all versions. In any case, you failed to provide any analysis here so let me provide it for you.

Custom games create a positive reinforcement system that softly encourages players to play the same map, with the same people, on the same slots. You won, you want to keep winning, and you want to keep gaining rating. This means don’t change the winning formula. However, that also means don’t try new things and so a feedback cycle in which players stay on dual gap and astro exists.

To change it, you need to create an environment that removes some of this choice (the matchmakers being worked on) and hamper the association between winning and rating (the new league system). Both being worked on. Both address the problem you failed to specify.

“small popularity”
Fun fact. FAF nowadays is about as popular as AoE2 was before Microsoft took serious interest in it. FAF is far and beyond the biggest fish in the TA-style rts pond and it is like half the playerpool size of CoH2. FAF growth trends have been increasing, not stagnate or downwards.

“Bad performance”
Jip just told you he was working on improving performance. You told him this wasn’t a big deal and that you knew what the big problems were. You then list what he is doing. Nice one. This is what made me think you’re just a complete troll.

The rest of your post is just negging drivel because you can’t think of anything except insulting people.

@ftxcommando Whichever map you make, the result will be the same. Because the units are the same.
If the players don't know good from bad. Taking an example from them is not advisable. It's only worse for the game

And I see Dual in the lobby at 99%.
If a person plays for the rating, then it's time for him to think about himself. I've always thought that people play for fun. And there is no pleasure in building the Mavor in 30 minutes, 3 times a day.I would understand if you were planning to make money this way.
Most players do not think at all whether the game is good or not. They are engaged in a safe demonstration of their dominance. They need to click 400 times per minute. They will click. They do not care.
It doesn't make the game better.

Read again what I wrote.

for trolling, I wouldn't waste my time at all.