3 ratings is all you really need.

I don't think we can sustain too many different queues. I know that you like to have many options @Emperor_Penguin but more options is not always better.
Yes, you can multiqueue, but this doesn't magically increase the player base. Each launched game will remove players from the other queues. I fear that we will get "dead" queues that are not as popular and over time people don't even bother to queue up for them.
Now you have to explain to new players that queuing up for some queues is a noob trap. Speaking of new players, I would prefer if could understand the matchmaker tab without having to read up 10 minutes of explanations what the different queues do.

By yourself, you can queue for all of them at once. Which makes it less likely there will be a "dead" queue.

Also if 2-player teams are allowed to queue for 2v2 3v3 and 4v4 at the same time, that would make a "dead" queue less likely

But you can only launch into one of them. That is my entire point

@blackyps
If we end up with some less used queues/options, that's fine. It doesn't need to be a noob trap. We already have the functionality to show how many people are in each queue. It's not hard to understand.

Even if we add some more queues/options, it's not that complicated for a new player to understand, and having more good queues/options available would result in more people playing TMM more often.

For example, currently, we only have 1 option for 1v1 ladder. As map gen week helped demonstrate, there is a substantial number of players who would play ladder more (or at all) if map gen only ladder is an option. So, if we added an additional 1v1 ladder option that only plays on map gen maps, then some people who don't currently play ladder would start to play that ladder. Meanwhile, the players who currently play traditional 1v1 ladder could continue to do so. While many people would queue for both, some players would only want to play 1 of those types and would not queue at all if it was not an option. Thus, having both options available would increase the number of players who queue in total and would also increase the total amount of ladder games played. Without a 1v1 map gen only queue option, we're missing out on the entire green crescent in this venn diagram: 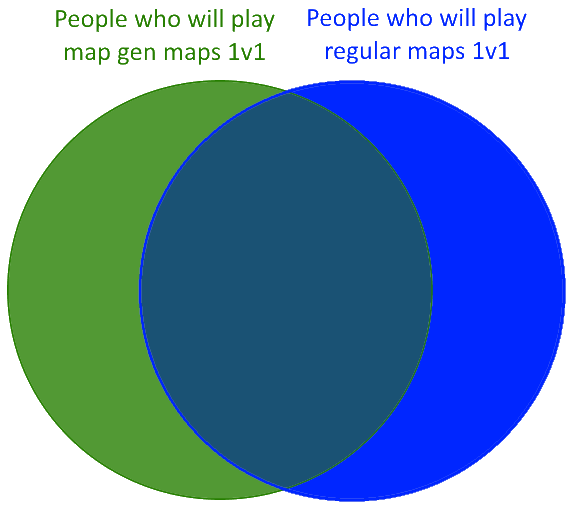 PS: I used 1v1 ladder as an example because we have recent info from map gen week on 1v1 ladder, but this concept also applies to having more TMM options.

ur missing the pure open palms 1v1 players in ur diagram

Also what is this extrapolation about map gen week, has anyone even looked at the unique users over said week compared to the week prior or after?

If you make too many queues and they end up dead then you can easily just remove them. No need to try and predict how many players will be in each queue and if it will be a problem.

I want to make clear that I only advocated for multiple different random map options in existing TMM, but why not also 1v1, 3v3 and 4v4.
Edit: specifically I don't advocate separate queues for random maps, just more (different) random maps in the map pool.

In particular a close team spawn 2v2 and a spread out spawn 2v2. To be introduced ASAP so dev team can judge random algorithm and players can judge close and spread spawn.

All while increasing the chance of getting a random map.

If you make too many queues and they end up dead then you can easily just remove them. No need to try and predict how many players will be in each queue and if it will be a problem.

I will direct the people with the pitforks that are up in arms because we removed their favourite queue to you then.

Generally spawns that are far away from eachother, like open wonder, lead to way more boring gameplay due to the fact that it only leaves very little space on the map thats contestable. If you compare wonder with hilly the difference is very clear.