@speed2
Thanks, in particular for the debug window - I expect using that would've drastically cut my debugging time! I'll update for your comments in the latest version.

Unfortunately I can't get the debug window to work for me (I just get an error message) and some other people have had the same problem. Asking in the AI discord Jip thought that you need to do an install from the cd version of the game not steam but that you may know the exact procedure?

Error message below in case it helps: 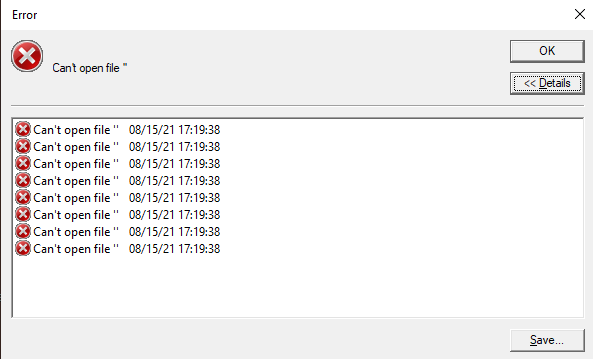 @speed2
Don't think I've got that folder with the steam install, I've got the following:
C:\Program Files (x86)\Steam\steamapps\common\Supreme Commander Forged Alliance
(this doesn't have a coderecs folder, and adding one in doesnt resolve the issue)

I've also got the FAF location:
C:\ProgramData\FAForever
same issue as with the steamapps folder

Is there anywhere else I may have missed for a steam version?

Although I'd hoped I'd got the CDs for both as well, checking I've only got the CD for the original supcom so cant try a fresh install via disc.

It belong to the game instalation folders, and fast few ppl having this issue resolved it by creating those folders

I am not finished reading your guide, but excellent work so far!

v4 changes (in reality v2, but when I uploaded the mod on its first release I had to rush out a couple of hotfixes where I'd forgotten to remove debug logic and accidently introduced a bug that affected all games!)

I've also updated the guide to reflect speed2's comments (as well as a couple of other minor points/sections, such as a bit on uploading a mod and some tests that I now run before uploading)

v5 changes - these were mostly about the ACU, making it more aggressive and less suicidal

v6 Hotfix - My AI broke with the recent FAF patch, so this is primarily to fix that. I was in the middle of more extensive changes so my AI is less stable than I'd like but I figured it's better than a broken one! I've also held off on updating the dev log for this release.

Issues currently present I'm aware of (which shouldnt have a noticeably detrimental impact on performance, but will be noticeable to anyone looking at the log):

V7 Update - T2 is now here! My changes were focused on creating my own engineer and platoon formation functionality (which took far far longer than I was expecting due to various difficult bugs - a lot of work for not much benefit), but at the end I threw in some basic upgrade logic so my AI now gets T2.

Various bug fixes. More notable ones are that the AI should work better on adaptive maps that 'hide' some of their mexes, and should be less likely to try and build on unpathable mexes
Custom platoon formation and engineer functionality. A couple of more notable features of this are that engineers now work together to build 1 building (e.g. power) rather than independently try and build 5 at once, and factor in what mexes theyre already planning to build on when choosing where to expand
Building upgrade logic - AI will now upgrade mexes and land factories (meaning for the first time T2 units can hit the battlefield!)
Load spreading of functionality to help counter the CPU performance hit of these changes
I've also updated the guide for a couple of points (e.g. including a section on events)

As before, much more detail on the changes/my thought process as I went about implementing them is in the dev log.

v8 Hotfix - Fixed a game crash that could happen if the AI lost an upgrading building (thanks to relent0r for for flagging there was a crash), along with a couple of other minor bug fixes.

I admire the guide / developers log that you are keeping

My AI also has a new icon

For anyone that's interested in the background to the last 5 versions/2 months - back at v5 I was crushed by gunner1069 (I usually get them to play a match every couple of weeks against the latest AI version) with a simple turtle strategy on Theta Passage - they didnt bother getting any mexes and instead just rushed T2 PD with their ACU and my AI had no answer despite having 4x the mass income. My primary focus in all the versions since then has been coming up with the logic that will give my AI a chance in that scenario.

Unfortunately, a relatively simple plan for a human (dont send units single-file into PD, upgrade mexes and then attack with MMLs) required a bunch of different bits of logic:

These changes also mean my AI will be worse in other situations - e.g. against a non-turtle it might choose to eco when it would be able to finish the game by pressing the attack, and it's also still poor at the mid-T2+ stage so extending the game via ecoing means it's more likely to snatch defeat from the jaws of victory. Long term though it needed to happen as a 'T1 or die' strategy only has a decent chance on 5v5 maps.

@maudlin27 Nice list of g
Changes of updates for you Ai mod, I'd like to extend you the offer it have this in a more of a cleaner formate over on the new faf wiki, if this is somtbing your interested in please send me a pm here or on the faf discord and I can set you up with a page

v11-v12 update:
The big thing I've been working on in these 2 updates is an alternative approach to pathfinding to replace my use of CanPathTo with a manual method that I can run at the start of the game and then lookup the pre-recorded results later in the game (rather than calculating pathfinding on the fly), since I figured this should be much faster.
Unfortunately I failed to factor in the consequential change this would have on other parts of my code, and while my replacement 'canpathto' check itself is much faster (especially on 81x81km maps), my overall AI is significantly slower! Since my new approach is based on terrain height differences, it will also be less accurate, so I've managed to achieve the worst of both worlds! However, it should at least be easier to get some CPU performance gains in the future, even if my first attempt has failed.

See 3.34.3 - 3.36.6 for details of the changes and the journey I went through getting an alternative pathfinding logic to work.

v13 Update:
My AI should finally have a chance (albeit a small one) on water based maps. Previously, it would ignore naval units (meaning they'd only die if they happened to get within firing range of a unit). It'd also assume it could send land units to attack the enemy base meaning on island maps it'd produce way too many tanks that would do nothing.

Now, it should try and deal with enemy naval threats, while also focusing on building amphibious and hover land units (although it still doesn't try to build any naval units).

Gave this AI a try and it's quite a challenge! It still tends to overextend a bit with its com and also seems to clump up its tanks, but if this is how it is now then I'm excited to see how it will be in the next few updates.

Thanks for the feedback, and glad it's providing a challenge! Do you have a replay that shows the tank clumping issue? It's probably just its normal behaviour but figured it'd be good to confirm (depends how bad the clumping was/what units).

New version will be up once an issue with the client preventing uploads is resolved, but I double-down on the ACU focused gameplay so will probably still suffer with ACU overextending (it just wont be as suicidal to do in the mid-game in the next version)

v14 Update:
I decided to take on board feedback from a number of people that the AI is too aggressive with the ACU and builds lots of land scouts, and so this version my ACU is even more aggressive and builds even more land scouts!
Also introduced a new suicide function (congrats if you manage to trigger this without looking at the code - the AI gives its first voice message if you make it commit suicide).