Interesting. I tried playing from Steam, same problem. Verifying integrity of local files from Steam did not do anything. Moving mods did not fix. Also, R for "repair" works

@jip Less than 2 weeks. So, I think it's one of the 2 recent patches

@jip "does not matter what hotkey is on reclaim".

Not sure when it happened, but recently. All mods off, does not matter what hotkey is on reclaim, it only works by mouse-clicking it

posted in Game Issues and Gameplay questions •
Do we really need veterancy?

Before FAF, SupCom was calculating experience earned only for last-hitting. Since FAF, every hit consumes compute. And veterancy doesn't add anything of importance into the game, but makes it less realistic. I would rather dedicate the compute wasted to making sure units don't shoot hills.

posted in Suggestions •
RE: How will you know if I make a UI mod that lets me cheat in ladder and tournaments?

@blackyps I am not planning, I just don't like UI mods in ladder and tournaments.

posted in General Discussion •
How will you know if I make a UI mod that lets me cheat in ladder and tournaments?

And won't publish it.

Advanced Target Priorities. Yes, UI mods are allowed in ladder. No, I don't like it.

posted in Balance Discussion •
RE: Where to download Advanced Strategic Icons mod

@brutus5000 Where do I get Advanced Strategic Icons then?

posted in Game Issues and Gameplay questions •
RE: The SCU Rebalance

Why can't Seraphim SCU have RAS? They are dead if game lasts too long as their economy is not mobile.

I feels like the devs just didn't think this through, but I am pretty sure that submarines should be battleship hunters, not vice versa. Right now, battleships can kill subs with ground targeting with their artillery, which is not even close to being realistic. Yes, it requires micro, but still.

posted in Balance Discussion •
Ythotha should get a switch for Othuy

Problem: Sometimes games go massive and this is where these experimentals become painful to play. Example: 10 Ythothas vs 10 Galactic Colossi is very painful for the Seraphim as dying Ythothas deal heavy damage to allied units. And sometimes you just don't want them to destroy everything around them after they die.

Solution: A switch for the release of the Othuy after death defaulted to release. Just the way you fixed the Salem's ability to walk on land.

I know you can salvage them before they die to stop the release of the Othuy, but it's hard.

Problem: When you have a lot of wrecks in a small area and press CTRL + SHIFT to see reclaim value of the wrecks, you see a lot of piled up values, and it's hard to figure out how much mass is in the area.

Suggestion: Let reclaim values sum up when you zoom out camera with increasing radius for value indicators depending on the zoom value, and the farther away the camera is, the more wrecks should be summed up.

It's known that random is bad for cybersport, but SupCom with artillery always hitting the target is not SupCom (Scathis, Salvation). Counter Strike deals with this by fake random (as far as I know) where bullets consequently follow a pattern until it ends then return to the starting position of the pattern. Even if Counter Strike does not use it, we can use it for artillery fire, but the pattern should be taking into account both artillery and target positions (patterns should rotate).

posted in Suggestions •
RE: Something is wrong with the lightning tank

Well, I guess the database is wrong about damage, but it does not ignore the sauser's shields. Looks like a bug to me. So, they only ignore shields that can protect others.

I test them using the ALT+F2 cheat, and enemy lightning tanks ignore shields and deal 375 damage per shot instead of 75. 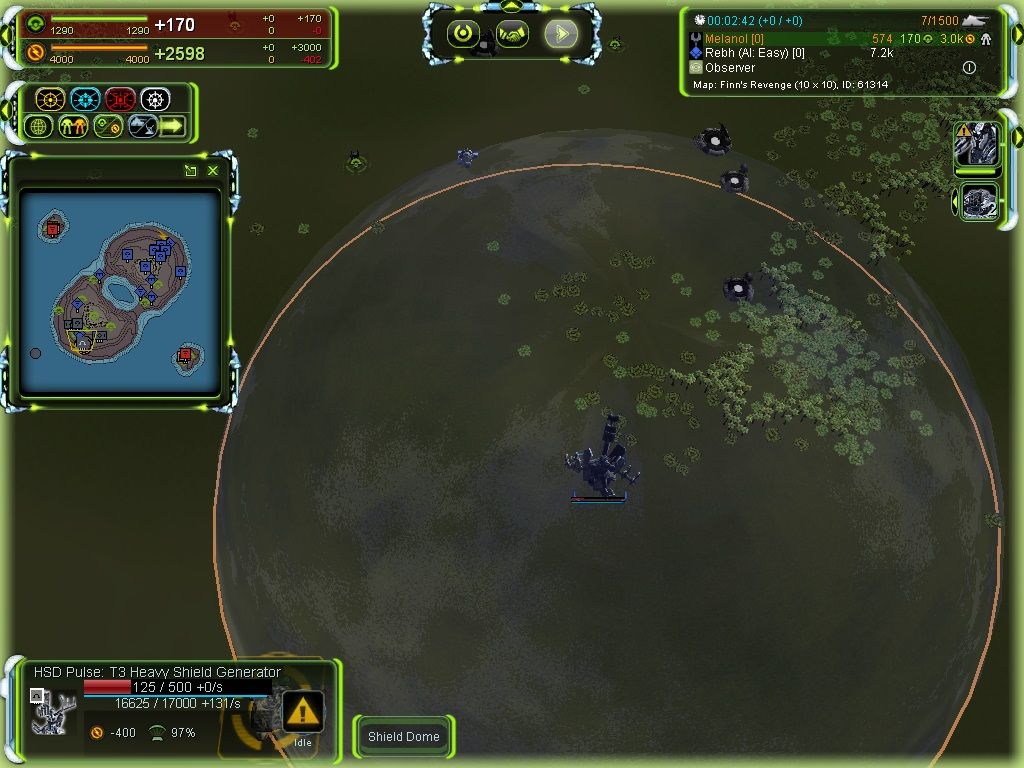