Fix walls blocking shots from behind

This topic has been deleted. Only users with topic management privileges can see it.
last edited by maudlin27
0

Currently, if a unit such as the ACU fires at a T1 PD or T1 AA building, and the PD has a wall behind it (so not inbetween the ACU and the PD), the wall can block almost every shot. If you zoom up close you get the very unintuitive sight of the ACU's shot going completely through the middle of the PD, not hitting it, and instead going on to hit the wall. By contrast, when the wall is in front of the PD (so inbetween the ACU and PD) it doesn't block the shot.

I would post this in the bug forum, but the fix could have balance implications, hence why I'm posting here.

I'm assuming the cause is related to the wall's hitbox such that the shot is treated as hitting the wall instead of the PD despite visually the wall being behind the PD.

My proposal is that the hitbox of the wall is adjusted so that this doesn't happen (assuming that would be sufficient to solve the issue). Ideally the walls would block slightly more shots when the wall is in front of the PD (i.e. inbetween the ACU and the PD), and none of the shots when the wall is behind, so overall you end up with a similar balance to now in terms of how effective walls are, but in a much more intuitive and logical way. For example I'm assuming if you increased the height of the wall slightly but reduced its x and z size it might achieve this but would require tweaking and testing to try and arrive at the right values.

I'd be willing to have a go at some basic tests to try and approximate the % of shots blocked now, and see if there are values that could be changed in the wall blueprint that results in a similar % but which solves the 'rear walls block shots' issue, if the balance team would be open to such a change.

Replay that showcases the issue - with the last PD before I ended the replay, there were 2 wall segments behind the PD that each managed to block almost every shot, while the walls in front of the PD failed to:
https://replay.faforever.com/16384423

Screenshot of an ACU's shot going straight through a building to hit the wall behind: 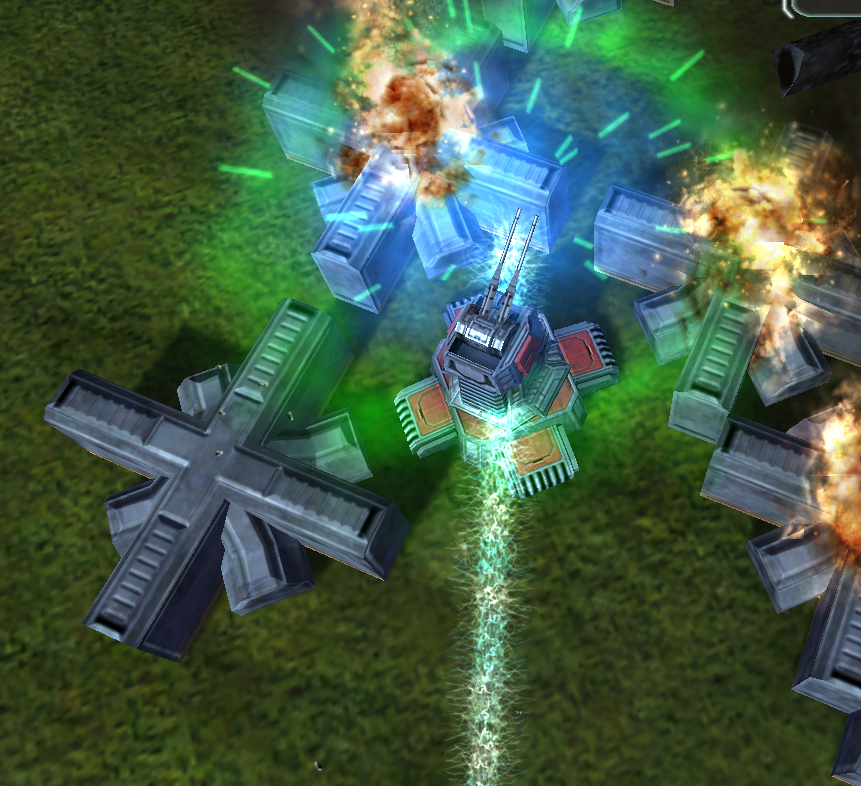 Known issue, we can't solve it I am afraid.

edit: we've looked into this in the past and it appears the engine is making a hiccup here - where it finds two targets at once, but ends up shooting at the wall.