This topic has been deleted. Only users with topic management privileges can see it.
last edited by
0
S
Su1phur

I have just purchased and downloaded the game to play with some friends, but I can't really play even a full match because the game crashes almost every time on every single tiny thing.

I could alt tab in the main menu and crash. I could play for 20-30 minutes and then it would crash.

I have tried stuff like changing to stereo on my speaker, and lowering my resolution, but it still doesn't really work. Please send help. I have my most recent (and most successful) game log and the exception error screenshot added. 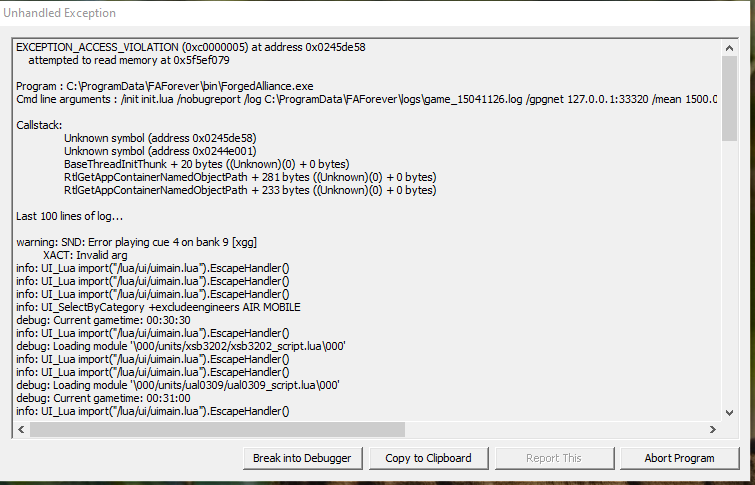 you got loads of "XACT" errors in your log. Those are typically a hint that you have issues with surround/stereo sound which happens to a lot of players (its an old game)
check out this thread (https://forum.faforever.com/topic/796/i-can-t-hear-some-of-the-audio-or-other-sound-issue-what-should-i-do) and/or search the forum for sound/stereo/surround issue. good luck

@amygdala Do I have to do that for every single audio device I have? Because I have a speaker integrated on my laptop, and my second monitor, as well as a headset that cannot have audio devices configured.

The one u are using i suppose. sound of the second monitor is probably not needed. The sound bug can be a bit nasty. If you struggle to solve it, you gonna find help on discord too. https://discord.gg/7GJjzHMs

I have crashed again, however it lasted way longer than before at 55 minutes. It failed to read memory, so I'm going to need more help. 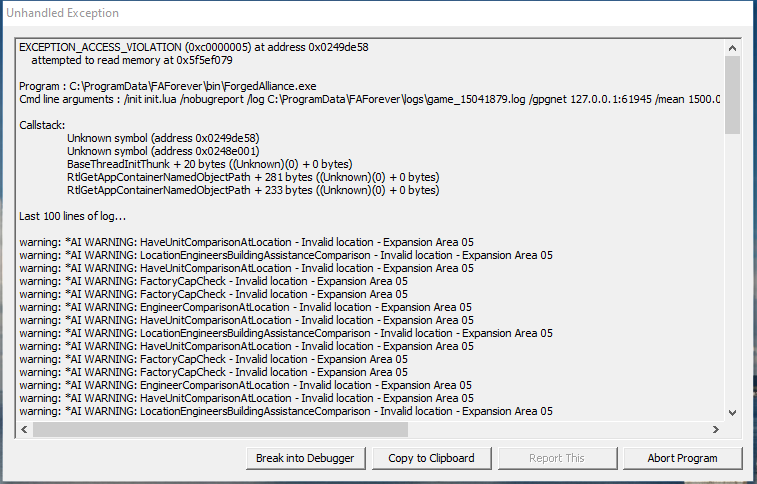 Then the game is still not running with stereo sound.

Any way to do a hard force of stereo (if that is the root cause of this issue)? I ask because I tried (I think) everything the internet has to offer and unfortunately nothing ended up getting get rid of the XACT error. Tried the R2.82 driver and a bunch of others and that basically forced a windows reinstall with how many things broke in the end. Still didn't work. Every driver (that I could get to install successfully, R2.82 unfortunately didn't as it spit out a bunch of errors on install and more constant errors in Event viewer), onboard audio disabled/enabled, external DAC (a very old and cheap one but that's all I had), every configuration out there, bios resets, game reinstall, directX reinstall, windows reinstall, everything I could think of... Every other game that I play works just fine so it's 100% some sort of software incompatibility with the engine this game uses that I just can't seem to figure out.

Game also hangs on exit maxing out a cpu thread until the process is killed if that's relevant info.

Maybe I missed something, but I've basically given up. Could just be Windows being Windows as with a 1809 Win 10 VM all of the problems disappear, but come on. Very annoying.

If nobody has any suggestions, then a virtual machine it is.

Well, I've done more than my share of fixing audio problems around SCFA - and inevitably it has revolved around either an errant sound device that no one bothered to suspect (or remove) - such as those created by some video cards or multimedia monitors - OR - USB headsets with some kind of processing to simulate surround sound. Once those two sources are eliminated (and simply disabling or removing the device helps) - that generally leaves only the onboard sound or the rare discrete sound card.

Just for my interest, what is R2.82 ? And you're right - it is a software compatibility issue. SCFA was written for the XACT audio system, which, at the time, was being pushed as a defacto standard for surround sound by Microsoft. It was not widely adopted but this game was one of the early guinea pigs - and it still suffers for it today. No one has developed games for XACT audio (let alone this very early version of it) in almost a decade at this point.