Your opinion about maps with map-wide assets

I think it was me who was complaining about it along with someone else in the VC during testing of three versus three and four versus four match making. I am still will stand by the original statements that i have made.

While your maps are pretty and your work deeply appreciated if it comes at the cost of player enjoyment due to unable to load into a game or preformace issue then it might be the time to tone down the amount that it goes into making a single map for the sake of players... If no other viable solution can be found that is.

I was on mobile (tho still good and viable) connection that day i still feel that map should not take over 5 min to download since i "almost" never expect it to. We should maybe more go gradually about increasing the map size to see where the viable limit is where map makers are gonna be happy and players gonna be less annoyed.

One side question that i have, does increasing the amount of decals increase the loading time for the map?
I am starting to feel that some newer map have "bit" longer load times.

If done right then the loading time is not affected. An example of when it is done wrong: if the dds file is not a power of two size-wise then the game has to resize it and that takes time

. Make sure they are always a power of two and things are good.

Don't really know about the rest of the discussion as I don't use the matchmaker.

I personally like these maps and appreciate the efforts put into giving the player a more aesthetic experience. Although I must say that I have a good internet connection so I cant relate to the issues other people are facing.

I also would like to share that I used to play supcom back in 2011 and I discovered FAF three years ago and I must say that I was very impressed with the maps ..so great job

I personally really like playing on such maps in custom lobbies, as they can look really cool, but I also think there whould be a different variant for them for matchmaking, without such assets. Essentially the same thing Valve tried to pull with CSGO back in the day, where they had different versions of maps for competitive and casual.

What about a compromise?

Alternatively, maybe the low res map could simply save the information itself somewhere in the map files instead of the DB, but the client would then have to read the map files to gee that information.

I think any solution that involves development time (of others) is out of the question. Sadly, having a low-res and a high-res version is essentially me making two different maps that just look a lot alike - but one is a monstrosity and the other is quite decent. Especially when I do not put in effort for the low-res version.

I'm currently experimenting with what shape this would take. E.g., can I still have a decent-isch map when I limit myself to 80mb / map, and having a high res version (which is 800mb) without making essentially two maps? The former will still compress to something smaller - aim is 50mb for downloading.

These maps are a large step forward in visual appearance - and sure, that comes with a cost - but it's a positive for the entire game.

It's too bad that the code cannot or does not inform the user(s) about what is going on, but surely that's where the answer lies - not in forcing the map to compensate for shortcomings in the loading procedure. It has to be a much easier task to address than creating some additional layer of checking and custom code work on the part of the map-maker which is not enforced in the map editor so that every map would have the proper indication (not to mention the trove of maps that already exists).

I've been going back and forth on how to approach this and essentially there is no good approach. I'll write a more elaborate post tomorrow about the hows and whys.

As part of the experimentation I've updated Two Step Shuffle. If there is no limit then it would've looked like this:

tldr; I'm not too fond of having two versions where one is low-res and one is hi-res.

This is a hi-res re-work of Two Step Shuffle. I used it to experiment with. You can view it in the video in the previous post or just enjoy these screenshots: 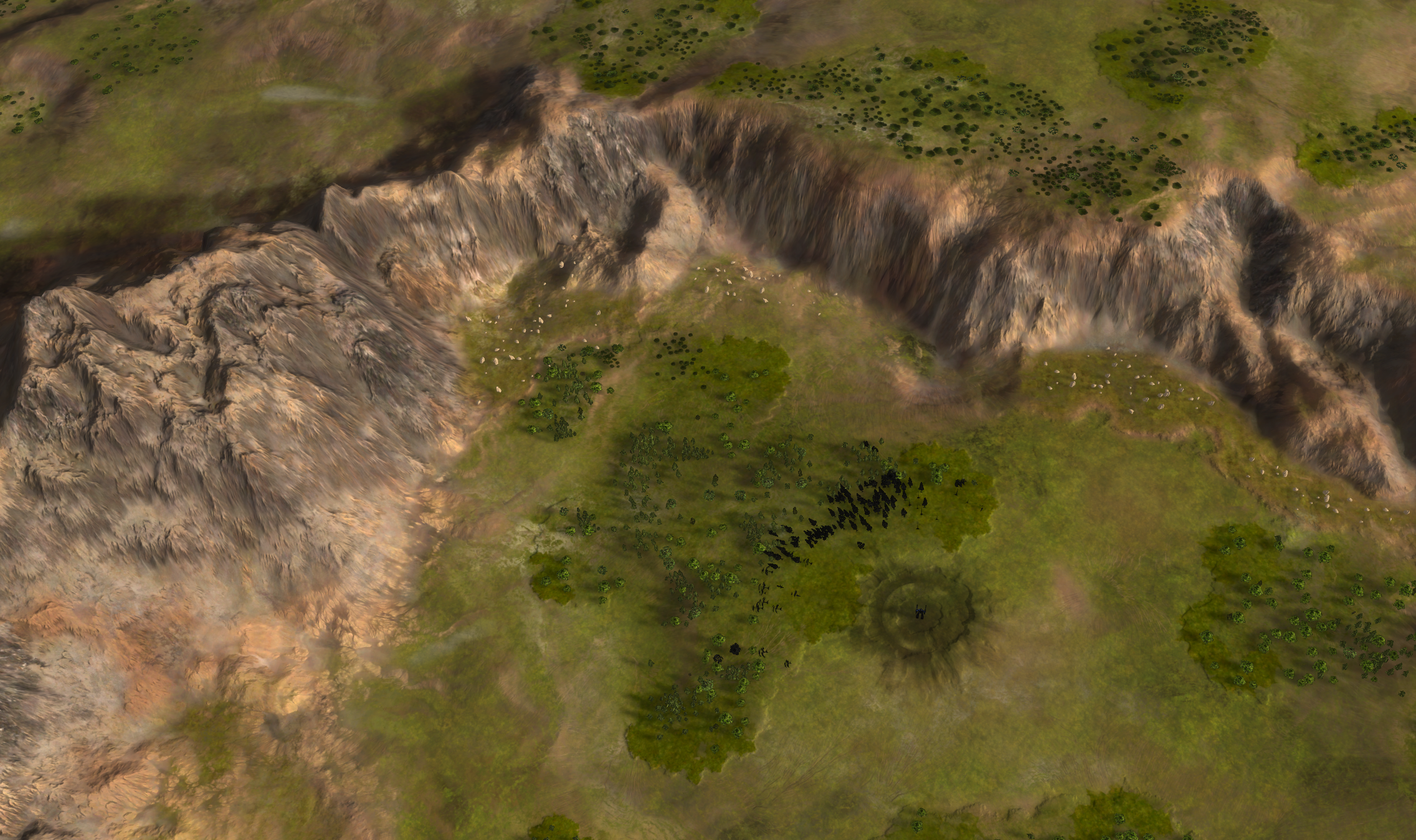 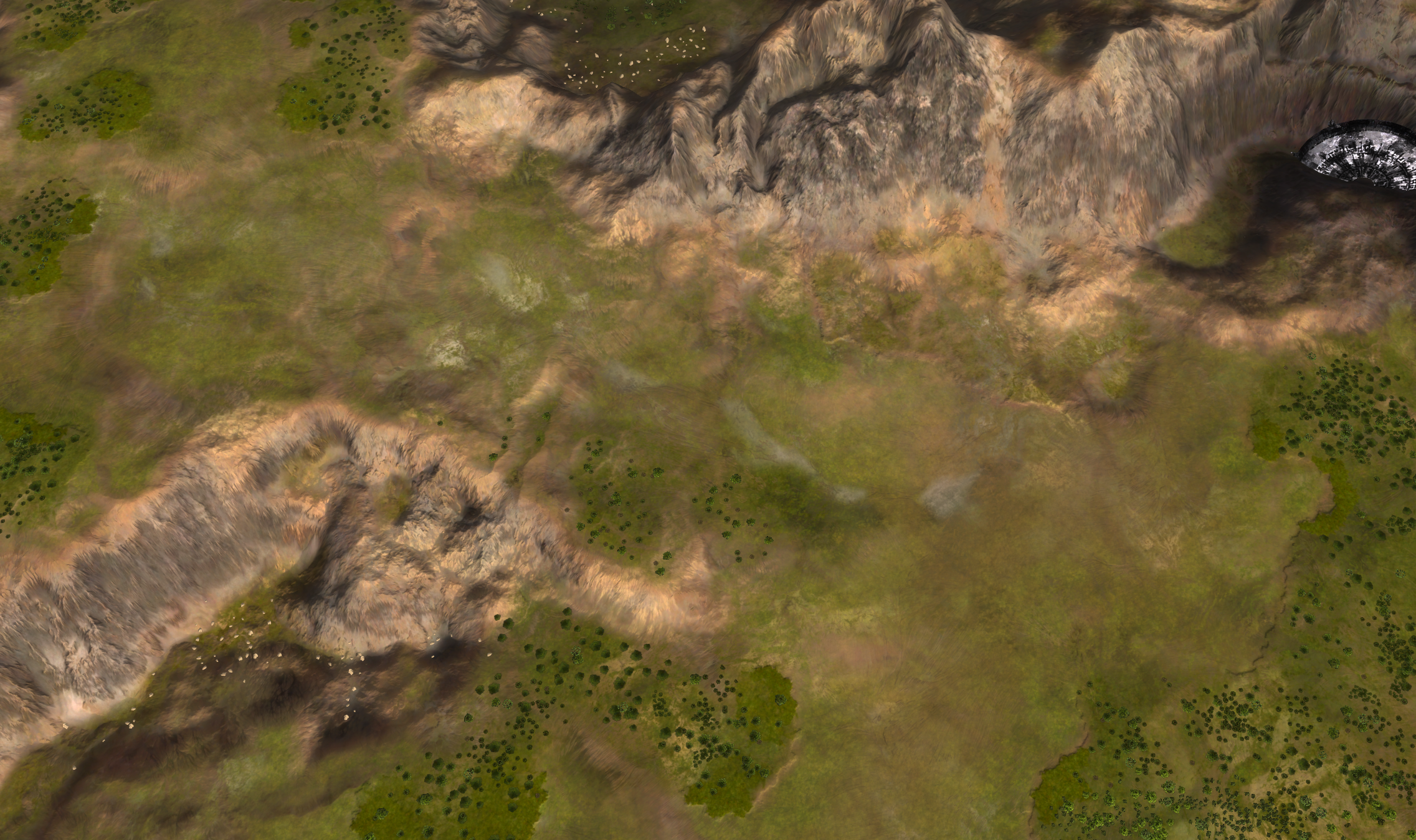 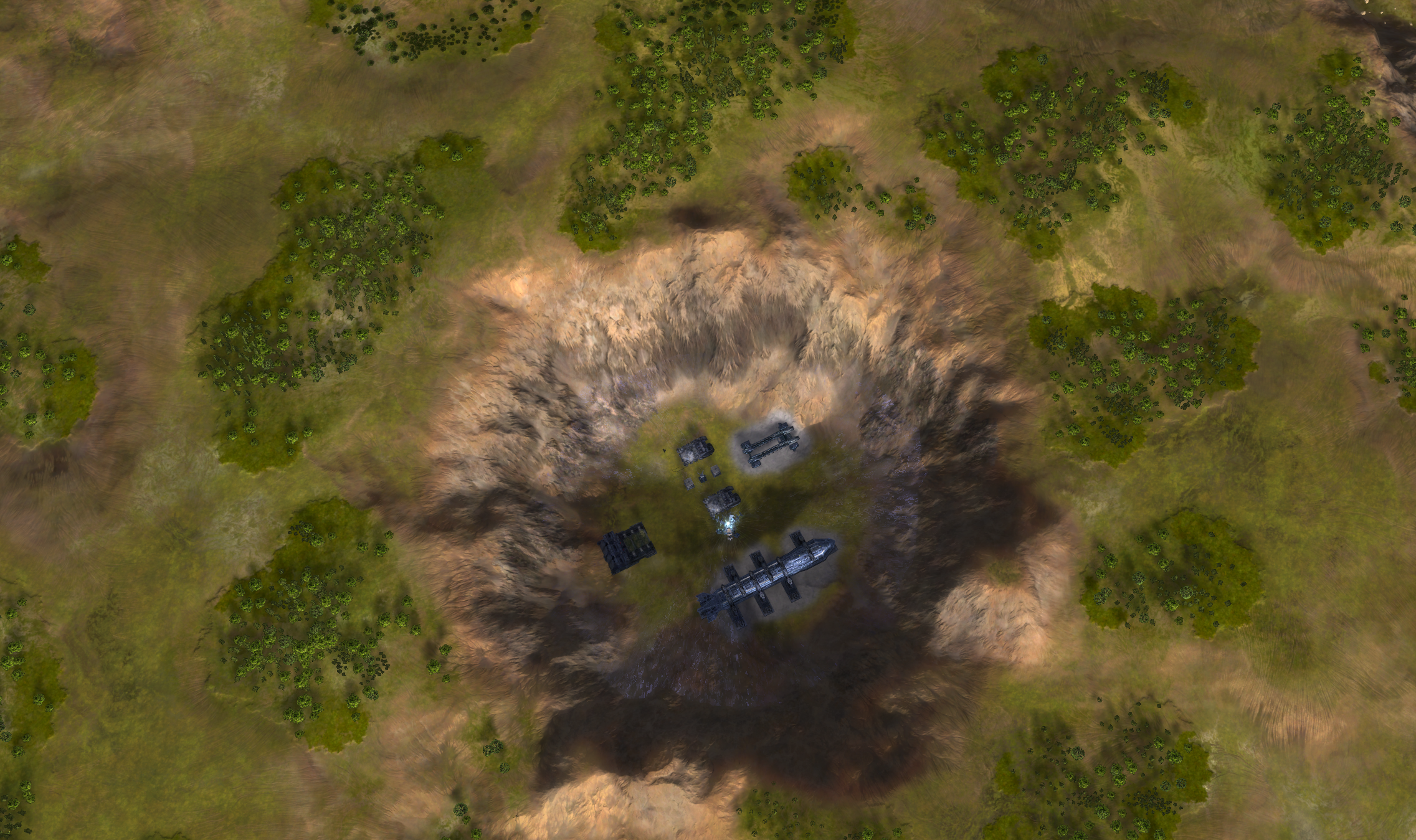 This is some of the work that needs to be done in order to make two versions of a map.

As an example in Kaali: 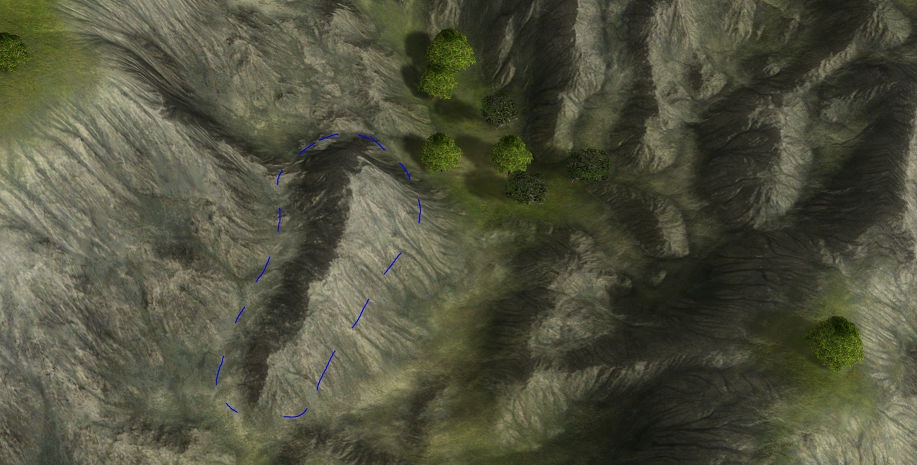 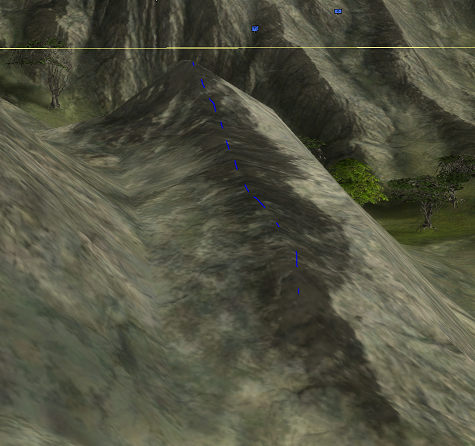 They no longer match. Typically this isn't an issue because you're not viewing the map from such an angle. But I suspect cinematic shots will be more common because you installed the high-res versions of the textures.

One solution would be to just use the high-res version and resize it. 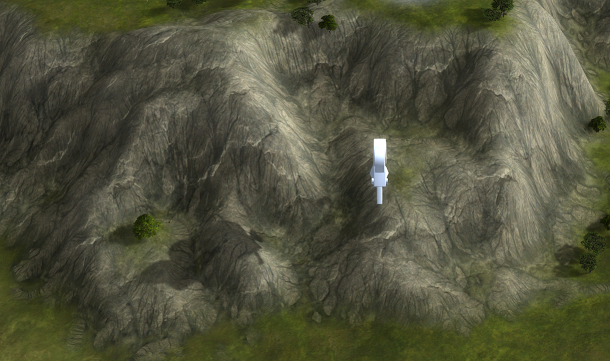 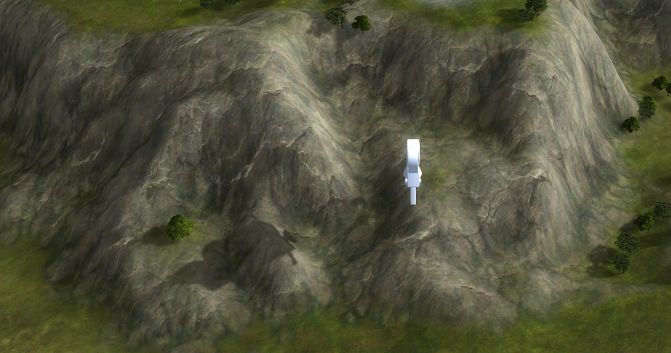 The high-contrast you'd expect / want is gone. The erosion was processed at a resolution of 16k, creating small pathways that can not be captured in 4k. Therefore they get 'merged together', reducing the overall contrast / sharpness even further than just being in 4k. To mitigate this you can create a version with more contrast by default, but at that resolution it just takes a lot more time (RAM).

Another issue is that there are just less pixels in a 4k (or 2k) version of a texture. A solution is to make the texture more transparent to use the stratum layers to compensate for the loss of detail.

I made an (extensive) automation pipeline so that I do not need to touch Gimp or Photoshop for anything. The idea is that I do as much in World Machine as is reasonable. This would need to be refactored / adjusted to make two maps instead of one. Once that is set in place I do not expect it to be much more effort, but it makes the entire workflow more complex and that is typically not something good.

I anticipate over 95% of the players to be playing on the low-res version. This version should still look decent. In order to compensate for that there would need to be more-than-required number of manually placed decals. Even though they can look brilliant, it is very time consuming (Archsimkats Valley took roughly 40 hours to make - majority of the time clicking decals) but more importantly: it is uninteresting work. At some point you cap and don't learn anything from doing it.

There's more than just these points, but for the sake of time I'm leaving it at this. Point being is that the overall pipeline gets significantly more complicated and the time investment increases by a lot and I'm just not sure if it is worth it. Just 'dumping' a 4k version is not an option, as I have an intended experience that I want people to feel when they play a map.

And last - where could I host the hi-res versions of the decals? We're quickly talking about gigabytes of data.