This topic has been deleted. Only users with topic management privileges can see it.
last edited by
0
S
Sheikah

I think the reclaim you see may just be a luck of the draw/run as the reclaim ranges from 2k to 20k on the 10km maps I have generated.

With regards to the previews that falls into the issue of spamming a users file system which does not have a great solution for storing just the preview as well.

Are you just using the zoomed out ctrl+shift totals that don't count tree groups with <10 mass or living civs? I just checked all my mapgen games and the range was 6k-27k on 10x10s, not counting tree groups (which the "low" reclaim maps definitely had) and civs. We've definitely never had a legitimately low reclaim map where there's no rocks or trees to bail out your build order - for reference Loki has 3k on ctrl+shift and no competent player would ever call it a low reclaim map.

Anyway, whether or not the mapgen can very occasionally spit out a genuinely low reclaim map is kind of beside the point, it's a far more influential variable for a map's gameplay than the number of ramps, for example, so it would be good to have a slider for it. 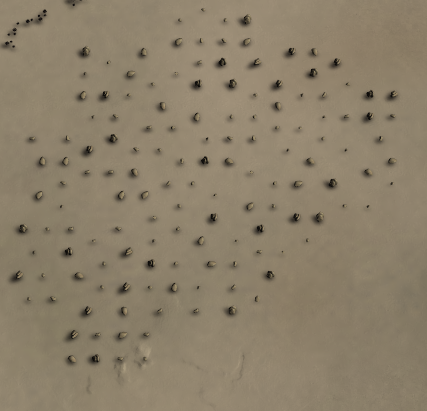 As a note I have added in the link to the map generator discord on the first post for anyone who wants to hop in there as well.

And making the reclaim especially the rock reclaim look less artificial is on the todo list.

i feel like there are always heaps of tree groups

Heh yeah it currently only places trees as tree groups as one of the historical bottle necks for generation time is actually placing all of the trees on the map so tree groups were used to have a similar prop density and reduce the prop placement time.

On some maps it is hard to tell where you can walk or not, which is critical for early build decisions.

For example this replay I realise early on that there is only one chokepoint on the map so I dont defend the expansion even though it looks open. The other player doesnt realise the choke points, and at minute 7 is defending an expansion that is not under threat - and has less units than me in the middle. So I can get an advantage that is game defining but not fun at all. https://replay.faforever.com/13282178.

What would be cool is if there was a way to visualize where you can walk.

It is possible to generate a useful 'strategic overlay' image where red is unpathable, blue is underwater, etc. Then you can put the image on the screen as a decal and change the LOD so that it only appears when totally zoomed out. In this screenshot you can see one i made manually. It's not perfectly positioned but you can see its marking red & yellow where you cant walk and white where you can walk. 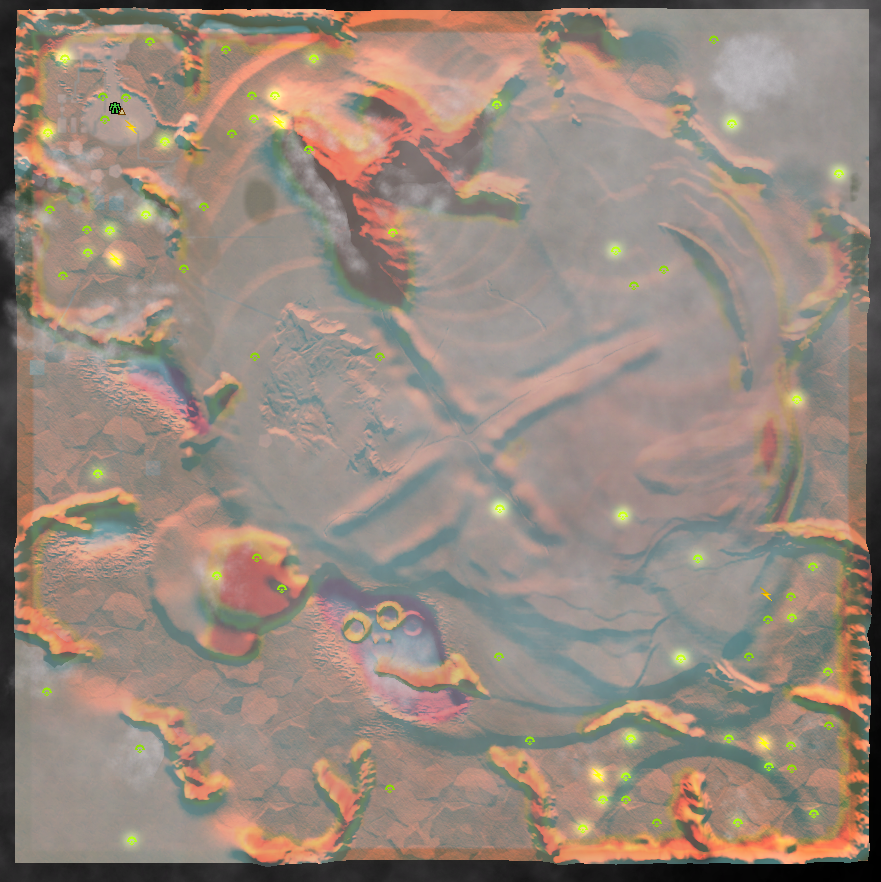 Not sure if its possible but perhaps a shortcut key could toggle the decal on and off.

This feature would be useful for all maps to be honest (including non mapgen) but with mapgen its much more important because you dont know the map before you play it. It's no fun to spend 15 minutes on a dud game because one player fatally misunderstood the map.

It has been a while since I last updated here's what has been in progress and what is going to be worked on in the future. As of this post the generator is currently at Version 1.2.4

As always feel free to leave feedback in this thread or also get in touch with me at the map generator discord: https://discord.gg/XZW62UdYfm

New Generation Types
Two additional types of map generation have been added to allow for three different ways of generating maps. The types are described below.

Biome/Texture Overhaul
The biomes that the map generator uses have been entirely reworked. Previously generated maps only used 4 out of 8 possible textures and they now currently use all 9 available textures for map detail. The textures are placed according to the map features such as slope, height, and terrain type so that can both look more realistic as well as better communicate the terrain to players in game. Additionally individual props have been specified to complete the theme of the map. This means no more evergreens in the desert. There are currently 9 biomes that the map generator can choose from. 3 Red, 3 Green, 1 Snow, 2 Yellow, 1 Desert.

Additional biomes can be added as well. If are interested in contributing a biome the following section describes how each texture layer is used.

To submit a biome you can create a map which uses textures as defined. Send the map files to me along with a name for the biome and it can be tested and added to the list of biomes upon approval. Please send me the map files and do not upload the map to the vault

The layers are used as follows:

Terrain Generation Overhaul
The terrain generation has been reworked to produce more realistic looking mountains and plateaus while also introducing more variety to the types of maps that can be generated.Additionally new symmetries have been added as well.

Civilians
Civilians bases have been added as a possibility to the map generator. Currently there are 4 civilian bases possible, 2 neutral and 2 enemy. If you would like to contribute a civilian base layout you can design a base on a map and send the map file to me for review and approval. There are not strict guidelines however it should allow for reasonable gameplay if it were to be placed anywhere on the map.

Prop Placement
Props are now placed more randomly so you will not see perfect grids of rocks.
Trees and cliff rock will also have greater appearance variety from map to map.

What's to come (planned but not yet implemented):

Now the only thing left for my wet dream to come into existence is Blind mapgen mode + unexplored mode ingame. If anyone manages that, ill host a doubleblind tourney

I have been looking into whether it is possible to do an unexplored terrain version in the map scripting since unexplored fog of war was removed in the game from the OG supcom.

Now the only thing left for my wet dream to come into existence is Blind mapgen mode + unexplored mode ingame. If anyone manages that, ill host a doubleblind tourney

Nice, already a proof of concept! (Last time I asked, everyone said its impossible...) Assuming you dont already look into it, a few points:

The square resolution is indeed a lag issue as well as a render issue. Currently I am achieving this using decals which are limited to rendering 4096 in game at a time. Additionally lag issues with checking units around each decal the more you have with the finer resolutions.

Currently squares are revealed based on if a unit is within a certain range of the center of the square. I am trying to use the vision radius however there are lag issues with computing this for every unit at the moment.

Working on hiding the resource markers.

I haven't yet tested with another player yet but hopefully will work with no desyncs. The other player in the video is AI.

I have now gotten a version that I think is in a state to be released soon. See here https://youtu.be/LaxFmVwHI8o

The resolution is limited by the engines capability to render the map so what you see is most likely the limit. If I tried to go lower there were visual bugs under various conditions and this was the lowest that worked in all the cases I tried.

Additionally I released a mod onto the vault that should be used in conjunction with these maps called Unexplored Maps. This supplements the map by performing some work I could not do in the map script alone. It is not necessary per say but it does ensure a certain degree of fairness between players.

As seen in the video, props, mexes, and hydros dynamically spawn in when discovered so that you cannot see them until you find them.

And a working replay of it in action https://replay.faforever.com/13537011
This game was run without the accompanying mod

With Client Version 1.4.0 Mex and Reclaim options have been added. Additionally the Unexplored option was added so that players can generate their own unexplored maps similar to the examples I posted above. 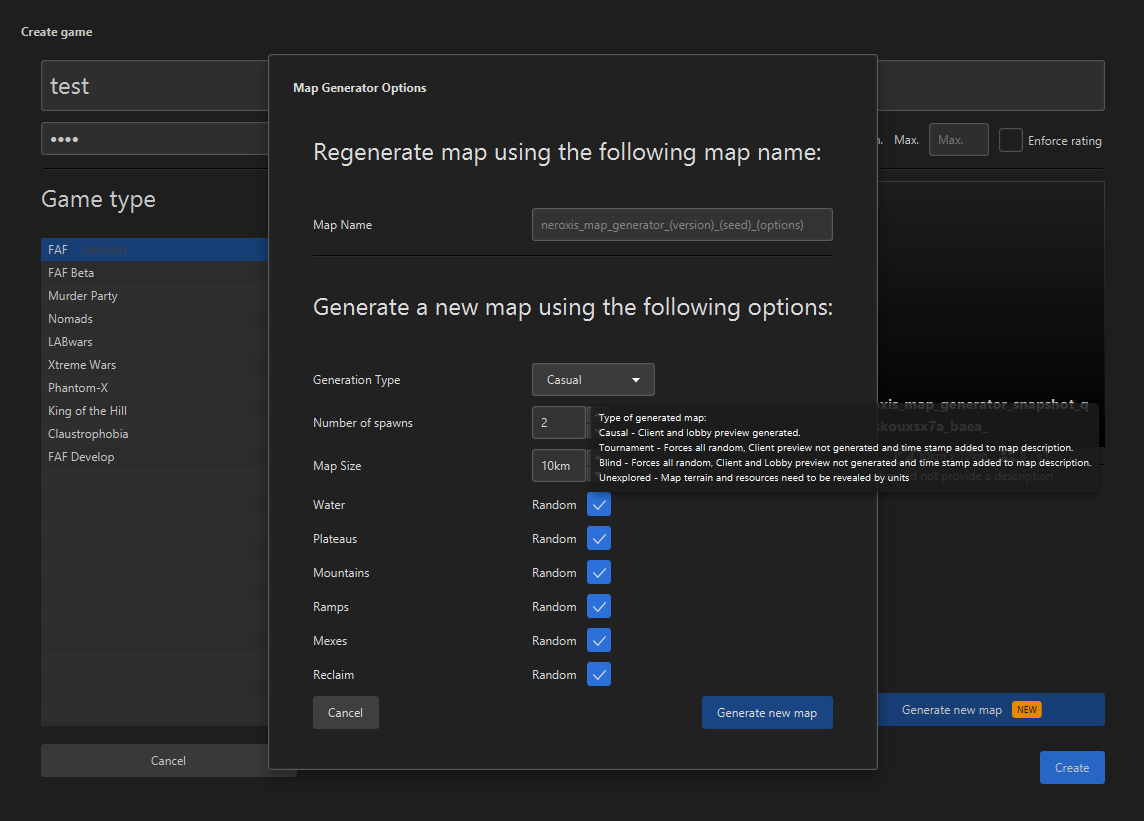 Just tried the unexplored mode - 2 things that would definitely need to be changed:

I think if those 2 things are addressed, it would already be quite playable

Can't you draw the decal yourself manually, and ditch the out of the box resource overlay