There is a curious phenomenon that exists when you take a look at the ladder league data: the 1800+ league basically has zero activity. As of the 27th, only 2 players with ratings above 1800 have played more than 30 ladder games over this month. Why is that?

I believe that it is because the incentives to play ladder are broken. A high ladder rating is valuable because it guarantees favorable seeding in tournies, which usually have money on the line. Inactivity guarantees this ladder rating will be maintained, while activity will run the risk of potentially lowering this rating.

As the title of this post suggests, I believe the solution to this issue is the implementation of some form of rating decay. Whether it is necessarily decay in the actual rating, or just the uncertainty, there needs to be some incentive to have people continue to play ladder. Back when I had played Heroes of the Storm, my rating would undergo a soft reset every 3 months - people who had achieved the top rating would need to play consistently to maintain that rating. This is the case for many other online games, and should be the case for FAF.

It's a pretty simple and straightforward system that adds decay based on how long a person hasn't played for. This can go hand in hand with the new "divisions" system, which displays a visible division rank (visible rating) on top of the actual player rating (invisible rating), but also works directly with the current rating system.

A returning player should find that their rating rises quickly with activity.

This also fixes the issue FtX is facing with tourney seeding - instead of having to give completely inactive players a rating of 0, the rating system already accounts for the decay that should happen.

Well the problem is much more deeply rooted than just a simple "people don't want to play to lose tourney seeding" and you can honestly see the reason why by just looking at the league system.

Now, with our Trueskill implementation, we would expect 1500 mu (or about 1200/1250) to be somewhere at uppercrust of Gold, instead it's like Diamond I.

I believe there's just a fundamental flaw with the rating distribution that revolves around the fact it was implemented in late 2012 when the dataset for ratings was essentially all the GPG vets that Zep knew and invited onto the client or cared about FA so much that they managed to find an alternative way to play once GPGNet closed. This initially biased sample has caused trueskill to have a skew towards what it expects the initial 1500 mu player to play as and so we have an absurdly large general deflation on FAF that makes the problem of finding players at the upper tier quite extreme. This is further accentuated by the fact that a lot of these older players are now also inactive and the system itself cannot do any sort of correction by redistributing rating from older players amongst newer players, or taking the rating from newer players and giving it to older players.

I'd rather just do a general rating reset frankly rather than a decay, I see the problem as a lot more deeply rooted into the structure of the rating system than what a decay is going to be able to solve.

Though I guess I should get some data on accounts that played more than 10 games this month and see how that impacts the distribution.

With regards to the soft reset stuff, that's already planned to be including with the new division system. We generally do not want to touch the trueskill value itself with periodic resets but rather adjust the structure on top of it.

The question is will there be a reward for having high rating that is shown on top of true skill like for example seeding in tourneys based on your rank and not TrueSkill, Ladder League winner being the guy that has rank 1 instead of the guy that has 60h during that month and is ~1.8k-2k rating so he actually can find any opponents.
Over all I think that with the roll out of the new division system it would be healthy to increase the sigma for all players so that in order to get any visual rank they would need to play some games and thus the true skill would be adjusted as well.

Increasing sigma should have no real impact unless you think there is a large amount of inaccuracy in the confidence interval of the rating as it is. For example, you do it with a transfer of global to 2v2 tmm because there is a degree of inaccuracy in expecting a guy that played dual gap for 1000 games and got 1600 to play that level in 2v2. However, you could expect that guy to be able to play a 2v2 at around 900 level if not better, and he should also be able to improve fairly quickly as he has a general foundation in the game. Doing this with periodic season resets is pointless. Petric with a +100 sigma increase will still be matching against people close to his original mu and get back to his roughly original confidence interval in 4-5 games.

I also don't really understand why you need a sigma increase to remove a visual rank? You could just require 10 games in the current season to get your league badge. 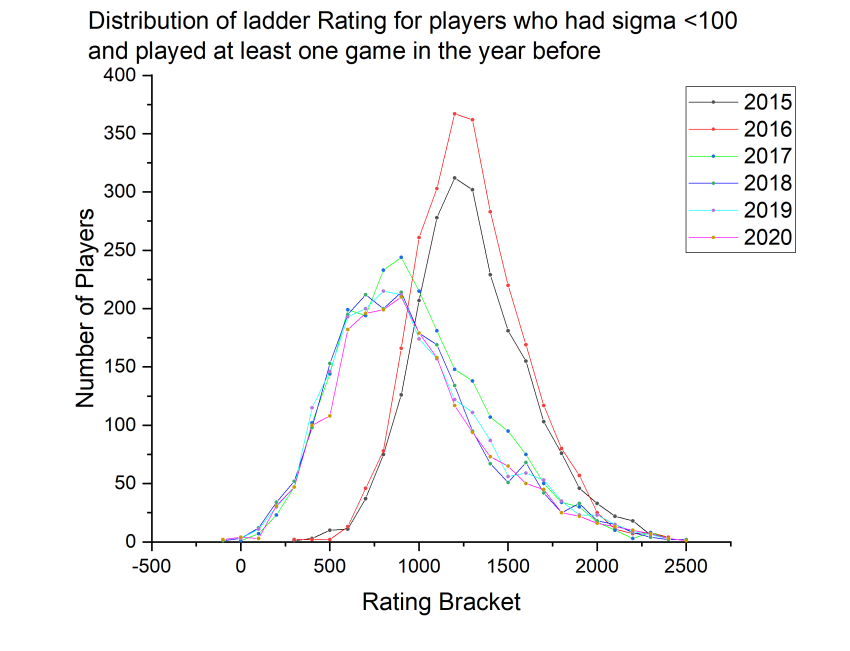