are the mods "Supreme Score Board" and "EcoManager" broken right now? Both show wrong/missing data in their score boards: 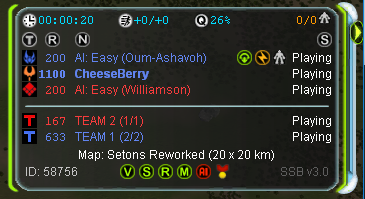 EcoManager can be "fixed" by deleting some Lua which changes the scoreboard, but I don't know what knockoff effects that has on the rest of the mod.
(Also, when active, the EcoManager mod plays the "select unit sound" every second or so, regardless of settings or if a unit was actually selected or not, which doesn't seem intended.)

I tested the mod versions found in the Vault, as well as some found around the net, all exhibit the same behavior.

Does anybody else have the same problems?
If so, are the mods actively maintained and where would I send a bug report?

You are using old version (3.0) of SSB mod. The latest version is 6.0 and you can find in the mod vault.
here is info on improvements and fixes that I made since version 3.0:
https://forum.faforever.com/topic/553/updated-supreme-score-board-ui-mod 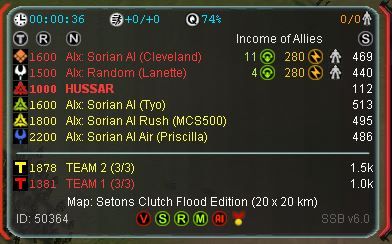 Thanks a lot, the updated version works!

The vault says you last updated the mod on the 12th, I assume as a response to my question. Does this mean that the vault is not the correct place to download the latest version of (your) mods?

Cheese, I think it is just a coincidence that the fix dropped after your forum post. A lot of people (including Gyle) have been asking for Hussar to make this fix.

Hussar, thanks for making this fix. Is it possible to update the Supreme Score Board mod so the mass income/power income numbers aren't affected by reclaim? Before the recent changes to FAF, a person could look at those numbers to understand the generated eco of each player. Now we can't do that, because the numbers constantly fluctuate wildly. I understand it's not your fault. I'm wondering if this is something you could fix. I think the community would prefer it that way (that we would prefer to have numbers that mean something rather than fuzzy randomness that we would have to interpret like witch doctors reading entrails). Again, I know it's completely not your fault. And I'm sure the admins had good reasons for making the changes to FAF, it's just unfortunate that the scoreboard stopped being so useful.

.... Does this mean that the vault is not the correct place to download the latest version of (your) mods?

No, the vault mod is always the correct place to download my mods.

I looked into why the income numbers constantly fluctuate wildly and now FAF does not exclude reclaim rate from income rate like it did before. Also, now storing reclaim values is happening on separate thread at 1 second interval while rest of eco stats are recorded at different interval. As result, it will be tricky to fix it in SSB mod. Therefore, I will try fix this issue in FAF code base but it might take a while before I have a fix and it is pushed to development and finally to production as a patch. I added this issue in FAF repo so you can track progrees on it.

For anybody who might read this in the future:
When enabling ecomanager and the new version of the SSB simultaneously, the SSB score board takes precedence and hence the broken score board of ecomanager get's overwritten.

Regarding the "selection sound" issue of the ecomanger that I described above, the solution is to explicitly enable the "common mod tools" mod as a UI mod. Just having it installed is enough to have the mod's functionality work, but to fix the sound issue, you need to enable it as well.