This topic has been deleted. Only users with topic management privileges can see it.
last edited by
1
R
Rama

Was hosting a modded game, went to rehost because of lag issues caused by a player who wouldn't drop. After leaving game via Menu, clicked on "Create Game" in FAF and nothing happens.

I ran a skirmish game vs AI, immediately quit, then relaunched FAF and was able to create and host a game. Played with team for an hour until we died, then quit via going to see Score.

Fast forward next day, launch FAF, same exact issue. Nothing happens when clicking "Create Game." I delete and redownload all mods used the previous game, still doesn't work. Also find that the "Manage active mods" button in Mods Tab will do nothing.

Seems at this point I have to launch a skirmish via C:\ProgramData\FAForever\bin\ForgedAlliance.exe after every time I host a map on FAF or I can't create a new lobby.

After further testing, this seems to be a conflict between AI Wave Survival and the latest patch to FAF.

Don't know what changes to the new patch are causing the weird issues between the FAF Client and AI Wave Survival mod.

We'll look into this, can you share me an image of the correct map / mod in the vault?

Here is the mod.

AI Wave Survival is a branch of the mod Swarm Survival. I haven't tested, but I wouldn't be surprised if that mod had the same issues. 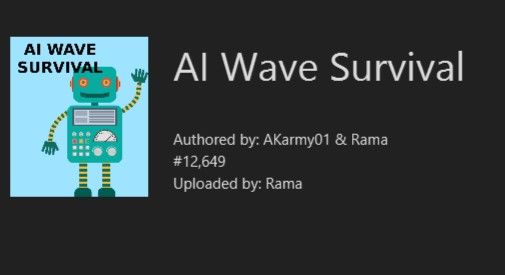 Another issue has emerged when playing the mod with the latest FAF update.

I usually host with with win conditions being Supremacy (player only eliminated if all factories, engies, and ACUs destroyed). Also with Full Share set to On.

The bug got weirder, around 10 minutes after the above player dropped, my own Commander was killed. I was pulling my SACU's and other units back when, about 2 minutes after my Commander was killed, the game announced my defeat and eliminated the rest of my units. Supremacy and Full Share were both on. I stayed to observe, a player after my demise also lost their Commander but was not eliminated and played until the game ended.

Here is the replay for that game https://replay.faforever.com/18537568

Just hosted a game, then quite FAF. Relaunched FAF and hit "Create Game" to generate a log. I've uploaded the log. The errors are at the end.

I forgot to clarify in my previous posts, I must run a Skirmish game without AI Wave Survival enabled. This seems to clear the bug, which then allows me to host a game in FAF. Rebooting the computer, nor reinstalling FAF, nor deleting the mod will clear the bug, so whatever the issue is, it is in a file that isn't deleted when the computer restarts or when FAF is reinstalled.

I had the exact same problem (create game button does nothing). I had to disable all mods in a skirmish started via the .exe from programdata. For me, it was not the AI Wave Survival mod though! I had M27AI on, but disabling that alone was not enough.

Thanks for workaround, still hope for fix!