@matr1 Due to the current "situation" which caused multiple Drop Outs at the Same time.
The teams were consolidated,
so the 6 players who lost team mates were able to reform and keep a strong team.

If players had dropped out 1 at a time,
we would have 'filled' the positions 1 at time to keep all 12 teams 'full'.

We now have 11 teams,
with any future subs coming from the draft pool.

@matr1 I haven't heard anything.
I imagine anyone who would like to cast may?

Not sure if casting while in observer is acceptable?
Casting after games DL'ed to vault is preferred method,

Good Luck everyone.
and
keep our friends who withdrew last minute in your minds.
We will see them in next one

We are now at 8 teams.
9 matches were played with 22 games between 11 teams.
All 3 - round 1 matches, went full 3 games.
While next 6 matches, all but 1, went only 2 games.
.
Many matches ran fine, but a lucky few had multiple desynchs.
We are not sure what caused them.
But a couple of thing will help lower the chances, are to:
Open your "mod folder" and look for a any duplicate AI mod folders and delete, then reinstall.
We must lessen observers = Less connections + less chance of de-synch
Only official FAF Livecast teams allowed as observers.
All other casters - please use "live replay" time/vault delayed streams.

Some announcements
Due to the large turnout for this tournament
I am announcing and committing to 2 more Rainbow Cup tournaments.

I will open another Fourm Post titled Rainbow Cups V +VI when this tournament is done.

It will be open for discussion on ALL aspects of the 2 upcoming tournaments.
Will dicuss team formations, substitution, ratings, rules and many other things.

Second Announcement
Would like to have a
Rainbow Cup V ~ 3 v 3 ~ $1.2K - Spacenet 2nd Wave <1800 rating
tournament around end of summer.
(same prize structure as this RCIV)
This tournament will be the same maps as this current tournament,
but...
Will be "something" like a 1800 rated and under tournament.

Every above 1800 rated player, who entered this tournament,
got drafted and had a chance to play.
I would like for "everyone" who registered for this tournament and
was in "draft" pool to be invited to sign up for the RCV.

Third Announcement
Although the maps will stay the same for Rainbow Cup V,
the AI has long awaited updates about to be released.
There will be exciting things like:
Zone control for AI smarter map control,
Better eco'ing,
better micro dodging and attacking,
better team play,
better air and sea play, and so much more.
plus....
We have new and old AI's that have been actively updated and want chance at the players.
Rainbow Cup V is going to be the showcase AI war of ages

First 2 days of Tournament is over.
The Semi Finals and Final are left to play.
Which is 2 matches or 5-9 games.

The way the tournament was structured was so that
36 players would sign up and commit to one weekend, and
then 9 players have flexibility to set date of finals.
This allowed more people to sign up.

Players please give min 3 day notice for FAF crew to make preparations
As Soon as we hear from the players on the date and time,
we will forward it on here asap. 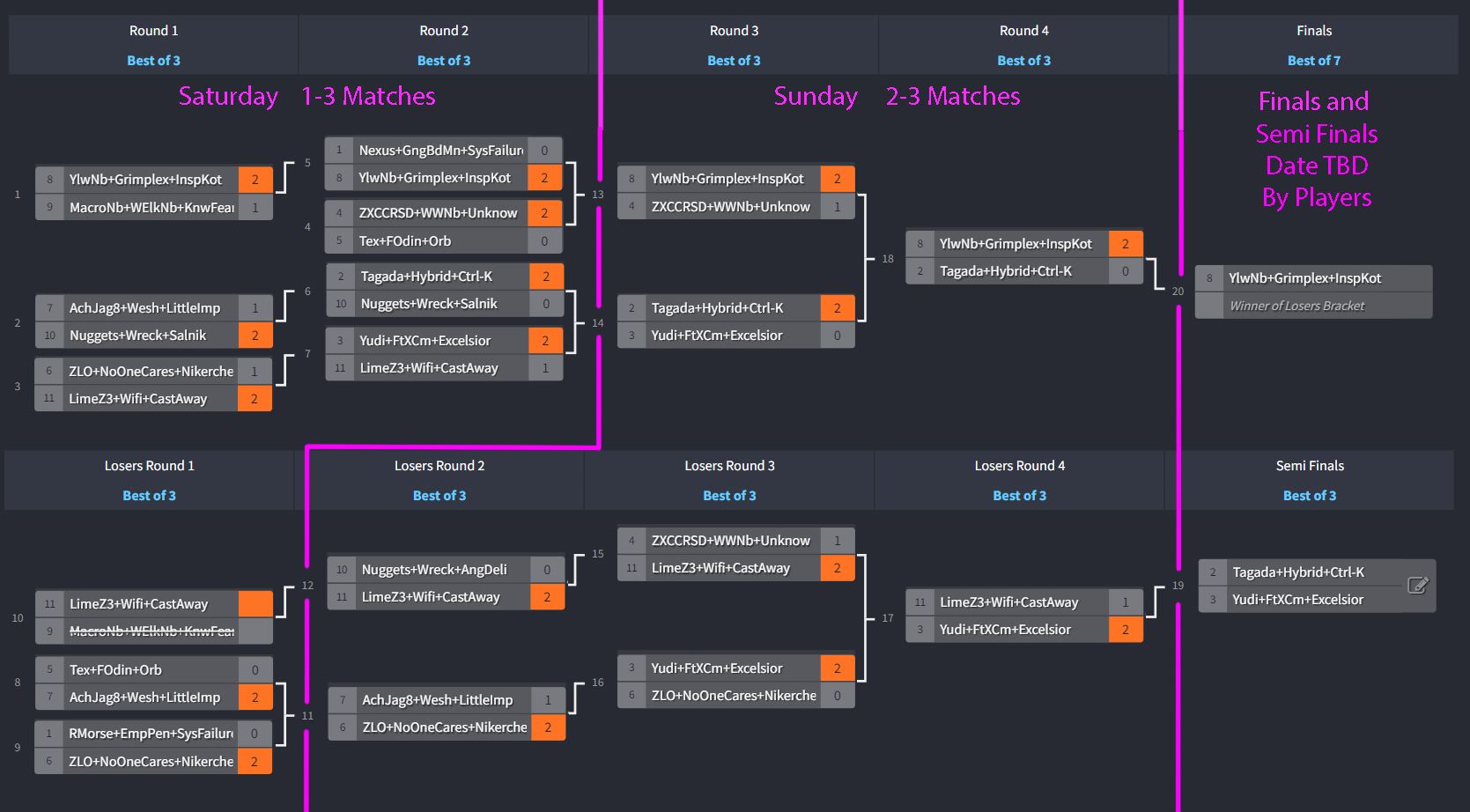 Sunday - April 3rd, 2022, at 1600 is the date and time,
now set for both the Semi-Finals and the Finals.
.
The Semi-Final match between
Team #2 Tagada/Hybrid/Ctrl-K and
Team #3 Yudi/FtXCm/Excelsior.
Match will start at 1600 UTC/GMT or
as Challonge labels it, 1600 BST (British Summer Time)
.
The winners of the Semi-Finals Bo3 match will play
Team #8 Banan3/Grimplex/InspKot in the winners bracket in a Bo7 Finals,
with the winners bracket team starting the match 1 game up.

Congratulations to:
Team #3 - Haachamachama, FtXCommando and Exselsior for Winning.
Team #8 - YellowNoob, Grimplex and Inspektor_Kot for 2nd place and
Team #2 - Tagada, Hybrid and Ctrl-K for 3rd place.

@fearghal Congratulations! Thank you for organizing the tournament!