We need to talk about TMM rating brackets

This topic has been deleted. Only users with topic management privileges can see it.
last edited by
3
B
BalanceSlaveNoob

Probably everyone higher rated has noticed that TMM is pretty dead in the 1500+ range. Part of that is certainly that it isn't new anymore and the race for the top 10 on the leaderboard has been won.
But a big part of the inactivity I would put on the map pool. I personally stopped playing it cause I didn't like 70% of the maps I was getting. I still don't like the maps I'm getting and I am the guy that curates the maps for the TMM pool atm. Most maps I don't like are for the <1000 rating bracket, which makes up more than half of the pool: 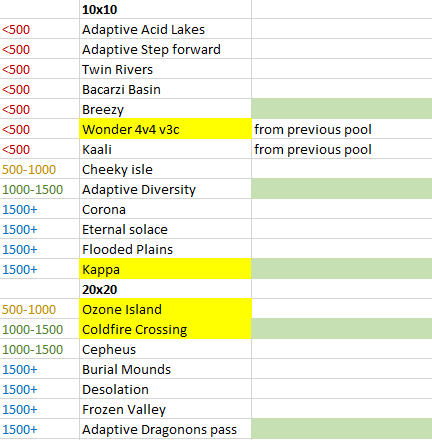 Second one is to reduce the pick probability of a map if the avrg player rating is significantly higher than the bracket of the map. (exact Probability distribution to be determined)

Let me know what you think.

First off, everything I say in this post is not meant to argue that we should or shouldn't do something. I just want to ask some questions and give some additional input.

The high rated players are not so many. Have you asked some of them, if they also stopped because of the map pool? Would improving the map pool make them be more active again?

The new matchmaker algorithm that will come soon will prefer to make matches with closer rated opponents. I can't really say if it will improve the situation for high rated players, because if you have to wait for a long time for a match, it will become more lenient again.

Picking maps from average rating will have the side effect of people getting maps that are not listed in their map list when they check it in the client, which could lead to confusion.

I haven't looked at the current logic that picks the maps, but I guess that changing the pick probability based on average rating should be doable. This will however have side effects on the rate map sized get picked. The map size generally increases with the rating bracket. This would lead to significantly more 20x20 maps in the 1v1 pool for high rated players and almost no 5x5. I don't know if all would agree that this is a good change. What specifically do you not like about the maps in the low brackets?

@blackyps The feedback I get is mostly from higher rated players, complaining about the maps they get. Yes there is quite a bit of bias in that. Would be great if higher people would also post in this map if they like the <500 rated maps they get to play in tmm. I'm not sure if that would be enough to revive tmm but I would play more.

Not having these sharp rating brackets will definetly confuse people, similar in the way that trueskill does.

1v1 pool might not need the reduced pick probability for lower rated maps. But @archsimkat and @Morax should have a better opinion on that than me.

Lower bracket maps are picked for their simplicity. So that beginners don't have to manage 4 lanes each. I and I think many other experienced players prefer to be a bit more overloaded by the map.

I have to agree here and brought up the issues in the past:

In my personal experience, barely anyone is playing TMM now because as harzer stated, the race to get to the brackets has ended, and motivation to play is low.

One thing I want to do is try to garner interest for competitive team play that leverages the TMM rating over global, and by holding regular, TMM-based events I am hoping that brings motivation to participate.

For the "average rating" used to decide a map, I think it is a fantastic compromise so that we don't take away the <500 rating pools or from the 1500+.

BlackYPS did mention in the threads I posted that he will be releasing a new algorithm soon, so we need to wait and see how that performs before evaluating further. Overall, though, point noted and I have been monitoring the situation for some time now...

You can't have a 900 get maps from the 1k-1.5k bracket, that's just bad design.
The point about probability makes sense until you consider that the overlap of maps between the rating brackets is huge so if you have games where the average rating is below the bracket edge. eg. atleast one guy is <1k but the average rating is eg. 1.2k-1.3k then the system will pick the two maps from the 500-1000 bracket most of the time making you play the same maps over and over with a similar player set up.

@tagada I don't see an issue of playing maps from a bracket up occasionally if you have a strong player in your team to guide you/ take over. The Rating gaps must just not be marketed as fixed to avoid confusion.

The pool itself would need to increase in size and each bracket would need to have quite a similar amount of maps to avoid the issue you described. I could see smth like 30-40 maps in the 2v2 pool and only 10-20 being changed with every pool rotation.

Maybe it is wise to run with the new algorhythm for a couple of rotations and see how much it improves the situation. The probability fall off for the lower rated maps should be implemented though.

I think the probability fall off could be more or less implemented by the map pool curator without any code changes because we already define a weight for each map in the database. We added this so we could balance the frequency of getting map gen maps, but it can be applied to any map.