So as time has gone on, I've noticed that there is a lot of general inefficiency with how FAF manages itself through Discord (yes there is no need to mention other areas). This is basically the only community I've been part of where you need to be given a yellow phone book of Discords with each having an answer to 1 or 2 of the questions you might be looking for.

Beyond that, I also feel like the FAF central Discord itself has done a pretty bad job at engaging users with the segment of FAF they wish to engage with. It's a 13k user Discord with hardly any way to ping more than like 20 people on it. Why would I want to use this Discord to organize a 1v1 game or set up some game in coop or find people my rating to shoot the shit with? It's not even remotely possible unless you want to go and pm every dude online.

Finally, I feel like FAF in general could benefit from keeping its various subcommunities under a single umbrella in order to maintain proper project communication. What I mean is that everyone can read a single announcements channel that pings them depending on their interest in pan-wide FAF events. Likewise, while subcommunities are certainly critical in providing user engagement as they connect with people that share similar traits to them, it should also be possible to allow fluid movement between said subcommunities. This goes back to the 2nd paragraph where I feel the best way to have Russians play with Australians or any other sort is to having rating divided channels where people can engage with people that share similar FAF game interests as them.

I've contacted and worked with every major FAF Discord (that I know of at least) in order to see whether there is much interest in this idea. To my surprise, it actually seemed like nearly everyone could agree with the vision and was willing to at least put in the effort to work with me. I've contacted:

Of these, the administration of each Discord didn't have a problem with the idea aside from Promo Discord. The Nomads Discord, however, decided to keep things on a "wait and see" mode to see how it practically works for other mod developers on FAF.

The only Discords I have not contacted were clan discords as I viewed them as more of a private operation than something that should be associated with FAF administration.

It should also be noted that I've only been talking to the people that manage these Discords generally. It's hard to speak with the 3000 users in the Russian Discord when I don't speak Russian, but the moderators there are all bilingual and I figured if I could get them on board, it should be possible to at least make the general population curious about the new plan.

So basically I've added like 70 new text channels to the Discord alongside about 50 new roles. Sounds like a total shitfest right? Well it's organized chaos so don't worry.

Everything here stems from a tree of opt-in reaction roles for the general user, let me give a picture to give a representation: 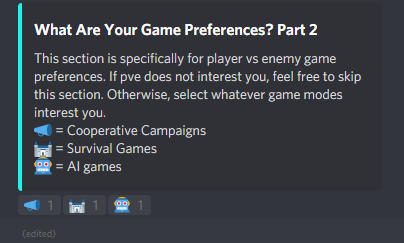 *It should be noted that I will have both Russian and English translations for these react role explanations.

Essentially, you will be able to pick roles to identify yourself by various characteristics that will then open you up to relevant FAF Discord categories for the type of FAF player you are.

I am sorting players by:

So while the Discord has like 80 channels in total now, you as an English speaking American that just wants to play dual gap might be able to access around 10 or 12 total.

The first two opt-in categories would be self-explanatory. The regional identity doesn't actually do anything aside from Oceania which opens up to an ANZ category as they are their own little world far away from the rest of the English speaking majority in US/EU. So to respect that, their region has special consideration.

Currently Languages are only really impactful for Russian users. Russian users will get access to a more condensed version of their current Discord (alongside some channels that are default to let them contact FAF administration for things like moderation issues or map/mod vault issues). The English language will open up the current FAF Discord topics channel. I did not do anything with French, German, and Spanish/Portuguese as I first need to see how many users that speak these languages are present to gauge whether it's worth giving accommodations.

PvP, PvE, and modded games are the most unique change for me personally and the one I'm most interested in seeing whether it succeeds. Essentially we had a couple problems:

Since Discord does not support anything that allows you to ping subsets of a role category like idk, @U300>@2v2, the solution here was to create a specific rating channel based on the current established league ratings. So <300, 300-800, 800-1300, 1300-1800, and 1800+. Then, in each of these channels, people can ping a variety of roles in order to try to set up games. This means a new player can ping everyone for a small teamgame at his general rating level quickly and efficiently, which hopefully leads to faster game setup and more interaction at lower levels of the community.

The same setup exists for PvE and modded games as well. However, if you have interest in playing a particular mod that is actively maintained, you'll also gain access to that mod's channels where you can get answers to various FAQs, announcements on updates, and a chance to give feedback to the active developer. This hopefully encourages developers to work on their mods as it directly connects them to those that have an interest in playing their work.

The mapper/modder preference will give you insights to help you contribute to FAF through these projects as well as a way to get into contact with veterans in these areas and the matchmaker team for getting maps into the matchmaker pools.

Finally the promotion notification is to stop the absurdly bad practice of pinging everyone in a 14,000 player Discord about stuff like tournament streams. You can get pinged for when a tournament is up and looking for signups, when a tournament event is being livecasted, when FAF player feedback is needed, when things like FA sales or other FAF promotionals happen, and when new FAF Development updates happen.

There were also around 2 dozen new assigned roles attached to the Discord. These fell into two real categories:

This should stop with some weird vague roles that we have on the FAF Discord like "developer" which covers tech support, mod developers, client developers, server developers, and a few other areas. Now the role should strictly apply to people attached to FAF development that happens on Zulip.

This in turn would also make it much easier to contact the relevant dev or person to your interests. Or at least it would make it easy to find them when you get pointed to them.

In addition, a lot of these assigned roles carry what are essentially moderator rights over their relevant segment. This should allow the various idiosyncrasies that are needed depending on group preferences to be managed by the people that are intended to be actively interacting with that area.

Overall I hope this makes everything way easier for both FAF administration (besides the mods that have like 80 channels on their feed now) as well as FAF users. Every issue that used to require links to a variety of random Discords should now simply require a single Discord and a sentence to explain what roles someone should pick. Hopefully it leads to more parts of FAF being aware of the existence of other parts, in particular the development parts of FAF whether that's the work mod developers do or the development team of FAF services.

I expect the changes to be made public within a week or so.

Good work ! Sounds like much needed modernization of our discord.

Fantastic, looks like I started getting into this at just the right time. Really excited to be able to easily find 1v1s and teams at the proper level.

BIG-BENNIS-MAGIC
This post is deleted!
Reply Quote
last edited by
0

You can pick your role in the #role-selection channel of the FAF discord. 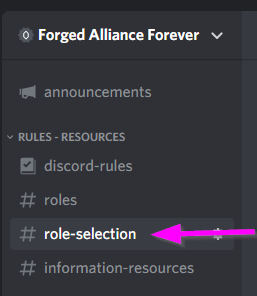