Ftx, according to your linked post on the rating system, I should “add 300 to my shown rating “

I have been 1700 or more for a majority of This ladder cycle, which should my+3 sigma put me at 2k.

None of my games have been in the 2k+ category, so what gives?

Then your deviation is lower than 100, you're facing people that have a mu lower than 2000+, or you are just getting unlucky with map selection.

Unreal, so most of the 2k plus maps get absolutely little to no play is what it comes down to.

Can we lower the top bracket a bit? Back on topic, I would like to hear from the ladder pool designer, mister arch, why he put a new map in such a rarely-played category.

Further, I really like some of the maps in that bracket, would much rather see less 5x5 than less 20x20. It makes no sense to be restricted from interesting maps simply because I’m not top 35 verse top 50??? Are other people in top 100 against 20x20 ? I thought from ftx ladder survey it was shown players with 1200 or less cbf to play 20x20. 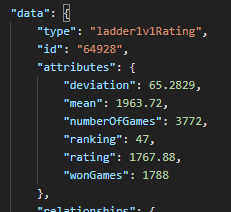 Those are your stats btw, so rather close to the threshold (mean is the MU).

Atm there are 47 people who can get 2k+ maps (a lot of them are new players with very high deviation). If you are interested in who that is, you can look at this query: https://api.faforever.com/data/player/?filter=ladder1v1Rating.mean=ge=2000&page[totals]
Just search for "login": to easily find the names.

Femto, thanks, but this does not address my original concern as to why a new map with a good effort is placed in such a high level bracket.

Archsimkat, can you please explain why this map Gruntti made is only for higher-rated tiers? I do not see anything that overwhelming in its "meta" that would confuse lower tiers.

The map was put into 2000+ because I was talking with arch about removing a map that was in that pool. He decided to remove it and replace it, and replaced it with gruntii's map.

Okay, so for Gruntti, can we put that map in that bracket next month?

I dunno why I do this for people after discussing with them since like you, they NEVER follow up with their "issues" and actually write in the message board, but Gruntti is a good fellah, think he should get a chance to show off his mapping skills here.

Thank you! That is all I wanted to know!

Thank you for everyone involved.

That was in the legacy client. I don’t think the official client displays it anywhere. Not really sure why, I thought showing sigma on hover was nice.

No there is no way in the client itself. The only thing that shows it is the faforever.log file where it states your mu and sigma next to your nickname.