In mass for mass exchanges whoever has more mass in asfs wins because t3 maa is 200 dps for 800 mass and asf is 400 dps for 350 mass.
So basically investing in ground maa to win air seems unfeasable, maybe make t3 maa comparable in dps to asfs ?
Also t3 maa takes 30 seconds to kill single t3 gunship(and it only costs x1,5) and single gunship can kill t3 maa in 14 seconds.
So even t3 gunships are good vs their "supposed" counters. Also you can repair air stuff cheaply.

TLDR: air seems to be over-tuned in HP department because it basically better than ANY supposed counter and only air counters air.

Now compare the e cost of an ASF to an maa.

Also you're not supposed to win air with ground to air. Minimal ground to air makes it inefficient to attack an area. That's the point. ASF don't shoot ground, so it isn't the job of maa to really care about it unless it's supporting your own air in the attack, which it is very good at doing. 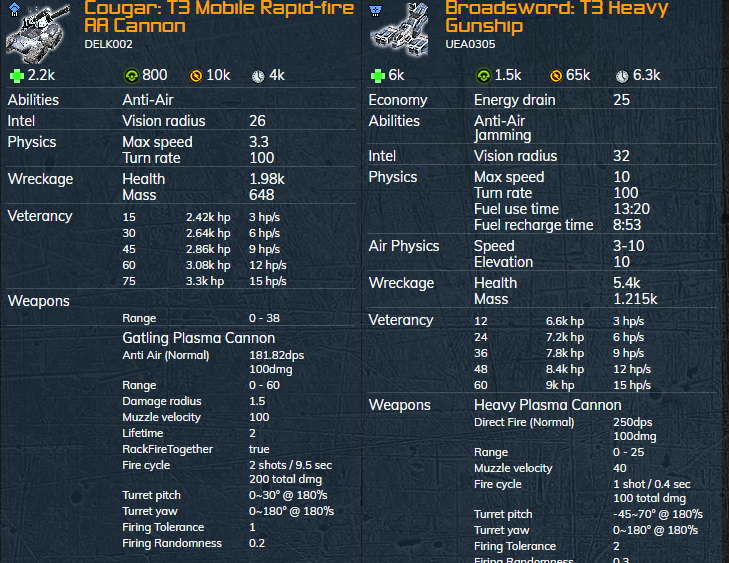 Just tested it and put both cougars right on top of each other and didn't micro them to be as nice as possible to the broadsword, cougars still crushed it. As broadsword numbers go up, it just gets worse.

Also you're not supposed to win air with ground to air. Minimal ground to air makes it inefficient to attack an area. That's the point.

This is exactly the problem air have counters only in air.

The problem land antiair is kinda slow, so can't catch up to asfs. So they should have better dps than regular asf.

Lets copy this situation to land imagine hards/loyalist/titan would have 10 speed and same hp/dps and could stack/have no collisions and remove splash damage cause on land only arty has it.

Would you call this t3 stage balanced ? Whoever has more t3 assault bots would win the game.

Just tested it and put both cougars right on top of each other and didn't micro them to be as nice as possible to the broadsword, cougars still crushed it. As broadsword numbers go up, it just gets worse.

Well restorer is 1200 mass and redeemer is 800 mass. Also your comparison implies that gunships are flying to attack t3 factory right there t3 maa is made or something liek this.
Cause the last time i checked gunships have x3 speed and no pathing restrictions, so its perfectly feasible to have gunships cloud in the place there is no land maa or have bigger group of gunsips vs smaller group of t3 maa, because it can't reach same space faster.

Made a video with same mass-comparison (1600 mass, added 1 t1 bomber

I'm perfectly fine with t3 maa costing 2x energy and having 2x dps. That would be balanced and make it not so useless.

I honestly can't tell if you're trolling by ignoring e cost or if you just play this game where you're overflowing 10k e at all times so e doesn't actually exist for you. I gave you the courtesy of showing that even if you do the dumbest cost analysis and put maa in the dumbest formation with the dumbest micro possible, it still wins. I got nothing else to add.

T3 MAA is supposed to counter air to ground, especially strat bombers, and not air to air units. Against gunships you should get t2 mobile AA which will absolutely shred larger quantities of gunships for the mass investement.

I thought all T3 MAA had some AOE? So one on one the won't kill an ASF before it can get away, but if you get a cluster of them together to an ASF cloud they chew out huge chunks of it. Main problem being building enough to reach that level, and then moving them to an ASF cloud as they lose so hard in the mobility department.