This topic has been deleted. Only users with topic management privileges can see it.
last edited by
13

The shittiest time of the year aka "winter" is finally coming to an end, and unlike the rest of nature we weren't in hibernation but instead already started early our spring cleanup

For those who don't know about it, last year we formed the democratic FAForever association which took over the business from it's predecessor in the USA owned by visionik.

As one of the last steps we moved the domain and dns ownership to the association and this also allowed us to give access to the people actually working with it.

When we looked at it was a huge list of over 75 organically grown records with outdated or redundant information. After a nice cleanup of using wildcards and deleting outdated stuff we are down to 30 records.

This will hopefully speed up some development / deployment processes in the future.

During this we took care of 3 additional things:

Around a month ago I resolved an issue that bugged me since I started development in FAF but never had the priority to do it. Do you remember the glorious day when you signed up for FAF? Or the last time you requested a password reset? Whenever you looked into your inbox you saw a horrible unformatted text email greeting you with the retro flair of the 90s.

When I first implemented user registration and password reset in the (back then Python in 2016!) api I took over the old server code email template with a note to myself to make it more pretty. Later on I migrated it to the current Java api (around 2 years later), wrapping the unformatted text in unformatted html once more with a reminder to make it more pretty in the future.

Later on we introduced Mautic inspired from the MailJet service. Mailjet allows emails to be predefined as templates that only need to be handed variables during sending. This effectively seperates styling and content of an email. Mautic allowed this on top of a lot of other features. But again it never was a priority and never got actually used for this purpose. Instead it got used for something else: A nicely styled automated welcome email for newjoiners.

Recently I became aware of several security and management issues with Mautic (more details here) and decided to remove it. But that would have caused a feature loss of this nicely styled welcome email. So finally emails receive some priority handling. And thanks to the MailJet company inventing a dedicated email markup language, FAF after 10 years finally received beautiful html emails. Some examples: 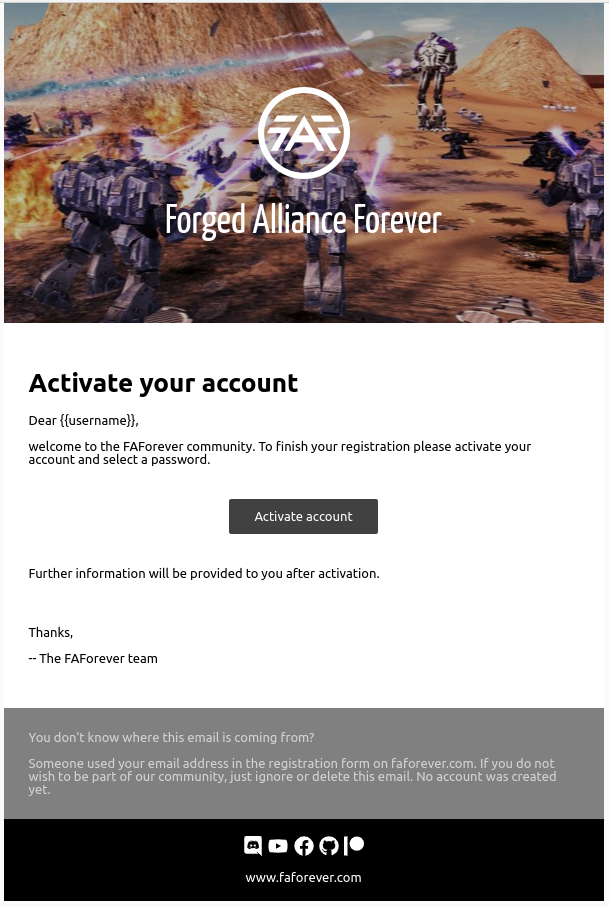