Best posts made by CasterNumeroUno

Show amount of players in-game in the "TMM play" tab.

As in title, would it be possible to have the amount of players in-game for each Q showed?
Cuz as it currently stands I find it hard to judge if the Q is actually alive and players are simply in-game or if the Q is dead and I'm gonna waste 1.5h again just for one 15 minute shitfest even though there is 1.6k people online which. 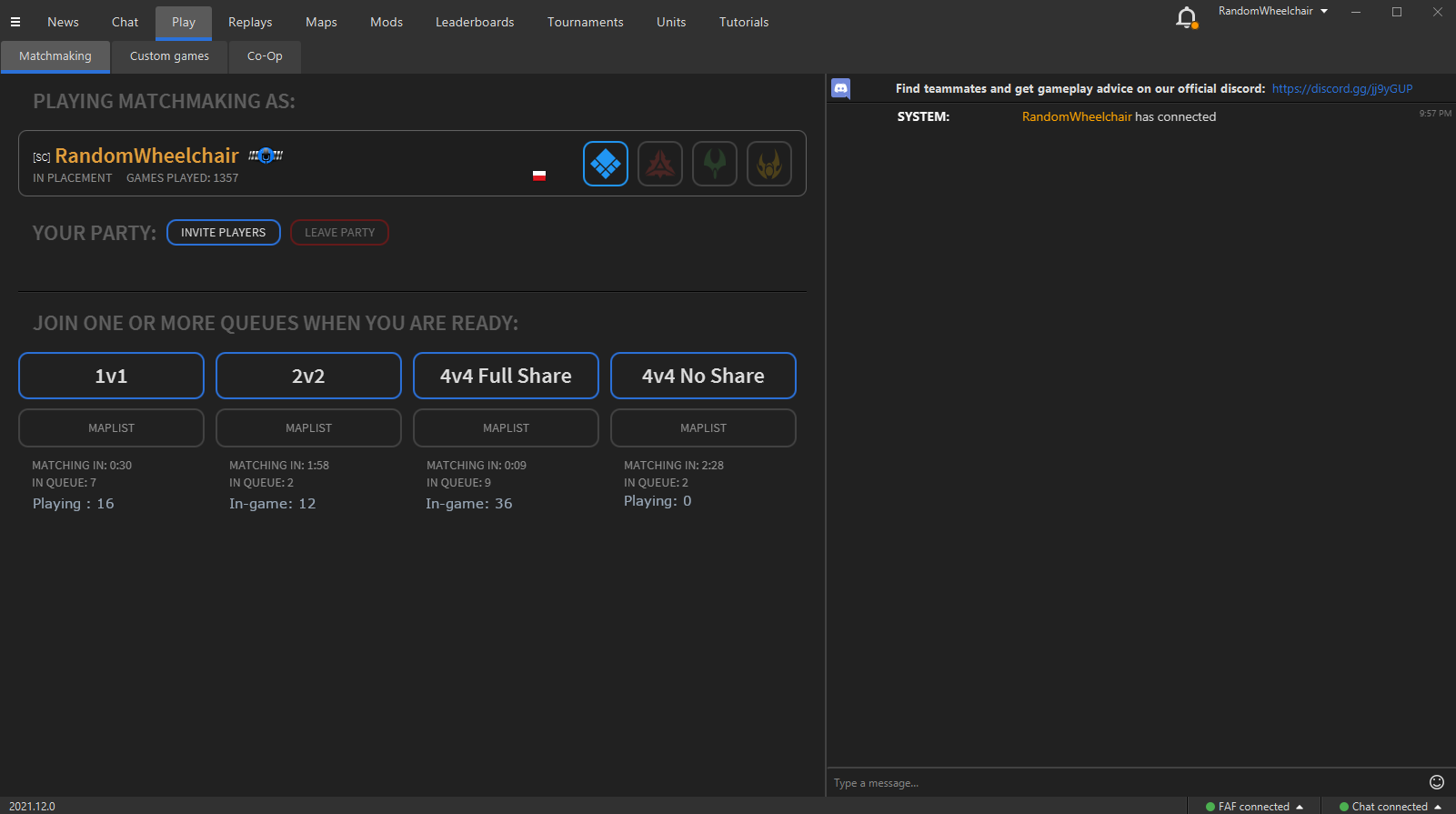 Title is pretty self explanatory. I would like to ask if it's possible and feasible to introduce MMR penalty for premade teams in 2v2 and 4v4 match makers in the same way that many other games do. That is raise their overall team trueskill rating by certain amount of points per every premade teammate.

Obviously I'm also open to discussion why someone thinks it's a bad idea and that coms and simply playing with people whose faf gaming habits you know, is not that much of advantage when going up against a team of 4 randoms whose overall true skill rating is exactly the same as of the premade team without the premade MMR penalty.

posted in Suggestions •
RE: Knowing who writes in game

They are colour based. Red note is from red player, white is from FtX etc. And if there is hundreds of them then Foley is dead.

posted in General Discussion •
RE: Pre-Built Units: Why not?

While I can see it helping out in low rated games, it will ruin some of the more complex play in higher brackets due to killing off some of the strategies that thrive on abusing other players early or doing unconventional plays.

Imo totally not worth the time for higher bracket games, or any games in competitive scenario as it makes it impossible to properly abuse other players in early game as recovering from first bomber will be much easier.

As for casts? Skill issue kappa. Instead of looking at the BO caster should try to speak about the map and players. What type of gameplay the map is promoting and what can we expect the players to do? What kind of cheeky plays are possible etc. So it's not fault of BO's being boring but rather FAF casters (me included) being just bad.

Exactly what others have said, this isn't King's of setons clutch tournament and I have no clue who allowed for the avatars to be even used in a tournament that's not even trying to determine the best people on clutch. Not to mention the addition of nomads...

As much as I would love to watch it, I can't say I'm to thrilled about your usage of the "king of map" brand in a tournament that is anything but that... 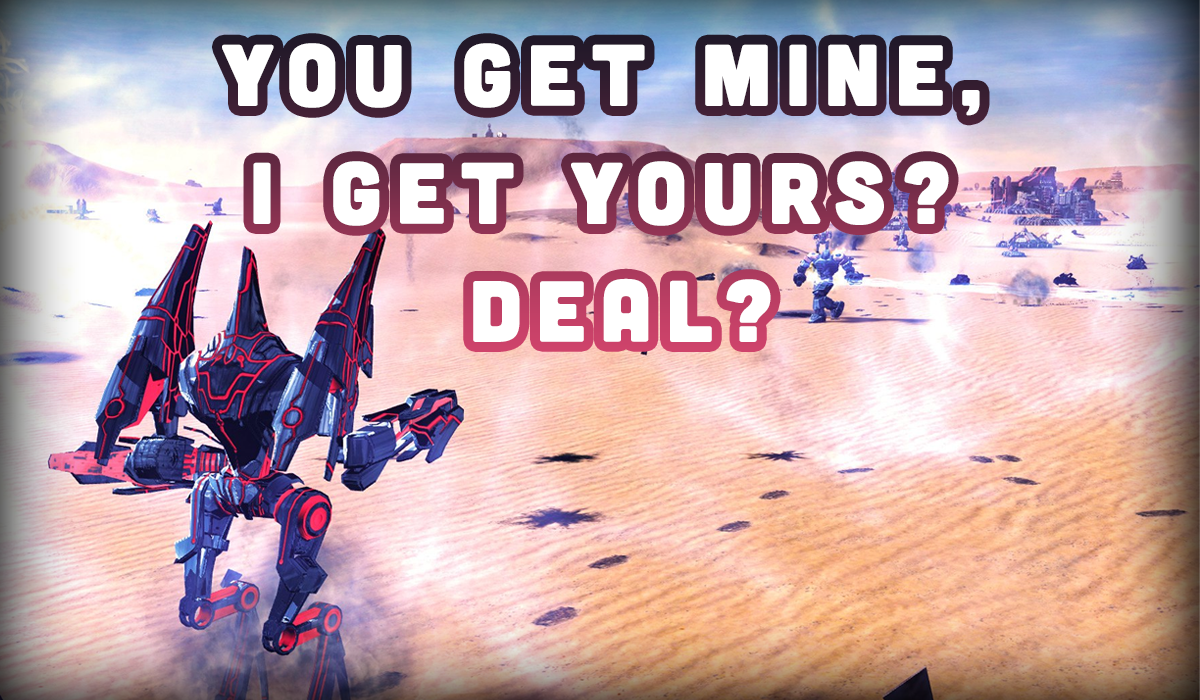 posted in General Discussion •
RE: Build orders for the May ladder pool

After seeing this BO's I have cured my FAF depression and actually played some games today!

posted in I need help •

Latest posts made by CasterNumeroUno

No. What if I don't want them to go on about repairing every shitty thing in the vicinity?
Though I'm still about making it at least a little bit cheaper.

Hey man, if you aren't already on it then join FAF discord. There is a whole section dedicated to mapping where I bet you will find answer to your question. And if not, then there is much more people there that can help you compared to here.

posted in Modding & Tools •
RE: how to kill tech3 anti air fight plane ?

With ASF duh. No really, restorers aren't that good at killing asf mass for mass, the problem is when you try to engage them with the same number of ASF or while having only slightly more. Imo you want to have at least double the amount of ASF as their have restorers, or even closer to triple the amount which honestly shouldn't be much of a problem if you were properly scaling your ASF production as single restorer costs as much as 3 and half ASF.

posted in General Discussion •
RE: how to detect sup com cloaked?

OMNI. Not just omni radar, but anything that have omni so t3 scouts too.

Please no. It's enough that Ahwassa can kill sams without losing much hp.

posted in Balance Discussion •
RE: What is your CPU and CPU rating?

R5 5600 - 105 cpu score.
And no, that site is bullshit. Just watch Gamer nexus or hardware unboxed to see some proper benchmarks.

posted in General Discussion •
RE: Correlate hit points of prop with its mass value

@jip said in Correlate hit points of prop with its mass value:

From my perspective: it may take 250K mass to fully build a paragon. But it takes only 1 defect wire to make it blow up. Hence, it has low hp. But there's still 250K worth of mass there, and that is not properly represented with only 5K hp.

This isn't nowhere as stupid if you think of the mass as being put into delicate high tech stuff that is simply brittle compared to an idiot proof tank like a pillar. Imo it makes way more sense for stuff like t3 arty and endgamers like nukes and para to leave wrecks with massively smaller HP pools compared to your sturdy tanks.

After all your GPU worth 1k when beaten up will be quickly losing value with each and every hit. Meanwhile a beater car that you pommel around a bit will be still worth nearly as much but with few more dents in it.

As such I don't really agree with linear scaling for all kinds of wrecks/props.

Same with rocks and other stuff. They are pure unrefined resources that when properly processed become much more sturdy. Kinda like making proper alloys. As such it's only natural that they will have less HP but similar mass as wrecked units/buildings.

It only makes sense if you happen to know the unit has low / high health - for the average casual player that is not common knowledge. He just sees a wreck, where one is gone in an instant and the other appears impossible to destroy.

Same reasoning as above. Some stuff is simply way more brittle and easy to damage than others. It's really simple and intuitive no matter how you think about it. If unit is easy to kill then it's wreck is also easy to kill.

The only thing I can agree with for now is just standardizing wreck HP across unit types. So that Mantis wreck have as much HP as striker and tham. Etc. Though now that I think it would be also counterintuitive as you need to make exceptions for units like aurora etc. So yeah. I really do think that current situation is as good as it gets.

posted in Balance Discussion •
RE: Windows Defender will not allow me to install

posted in I need help •
RE: will this harm my pc

No it wont.
As for the reason why it shows up is that we are simply to broke to pay few thousands each year to Microsoft for proper certification of our installer software.