RE: Why do unfinished buildings degrade with time?

I think much more so the latter than the former. The decay rate is so slow that the amount of mass (or energy) you lose per tick is very low compared to that stored for a nearly complete building.

For example an unfinished T1 air factory can actually store quite a bit of energy to help get a gun upgrade sooner for example.

Alright, jokes aside... The job to build factories is usually given to T1 engineers behind the push but that role was now assigned to the Sparky as it is part of a push.
There is basically no difference or if any, very little difference in gameplay terms.

posted in Balance Discussion •
RE: Lock 0 rated players for 4vs4 ranked and AFK problems

Have a 'noobs welcome queue' for starting players, say below 10 or 20 games to get rating established, but which any other players could still join - or maybe select players who are willing to train new players ingame - who would not have their rating affected themselves

I want those T3 pgens that you are using lol

But I was thinking more of the use for the hydro you already have in your base from the start of the game - it still has value due to the t2 adjacency discounts it can provide, eg 500e off your nuke consumption.

I agree that it feels more worthless to rebuild late game if it gets destroyed - and just seems to block space which could be put to better use.

Which gives me the idea - what if a t3 pgen, could be built on top of a hydro as well as normally, that would provide a use for the space. dunno if this is possible in-game tho

Well I wouldn't say they are irrelevant late game, they definitely can still have value as part of an air grid, or can save a chunk of power of your nuke launcher without risk of damage from exploding, or can just chuck fabs around them...

@jip I guess I was looking at it from the point of view of these UI mods giving some players advantages, hence making for example the mass fab management inherent to the game

If I am using this 'feature' then it means my t2 mex upgrades can finish faster than someone who isn't. we already have auto-ring with right click as an option, having auto-unpause seems like it would be in similar category

This is looking great! can see a ton of work has gone into this update and thanks in advance to those who have put in the effort.

Seeing EM being one of the deprecated mods, reminded me of one the small quality of life changes it included which could perhaps be considered for FAF itself.

That is, assisting a paused mex with engineers, will unpause that mex so that its built in build power doesn't go to waste. I know it is common for players to shift click paused mexes with a group of engineers, this would simply make the process more efficient.

posted in General Discussion •
RE: Roll off time is indeterministic

This looks nice with small round aeon engineers hovering in a round factory, but I am worried it may look a bit jarring if you have, say percies doing an instant 180 on completion...

posted in Balance Discussion •
RE: Make the ion storm selectable as a 'neutral' unit and give it a veterancy bar

posted in Suggestions •
RE: Make the ion storm selectable as a 'neutral' unit and give it a veterancy bar 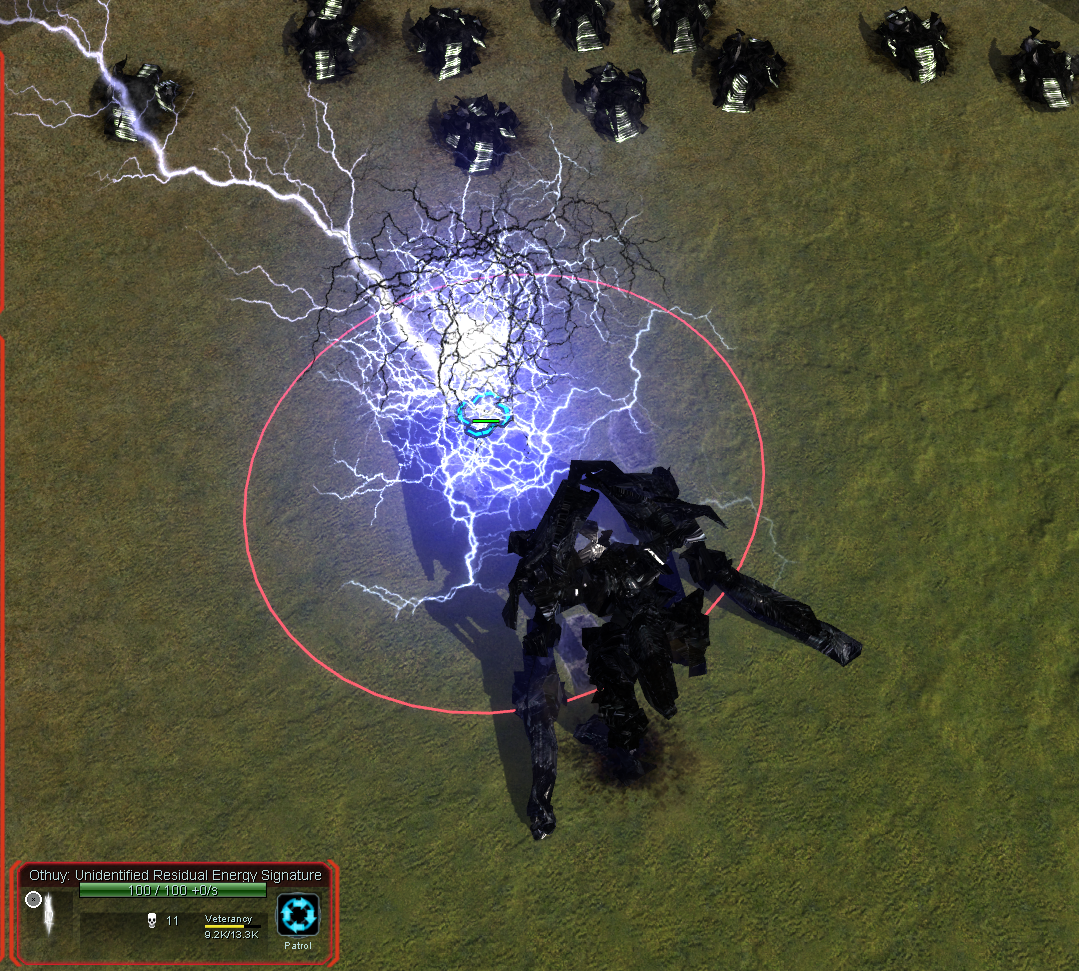 posted in Suggestions •
RE: 86% mass discount

@black_wriggler I'm not saying you are wrong or that it's a remotely smart idea to make units just to reclaim them. I'm just saying, that your statement

depends on your view on the gains of adjacency (per unit/per time) and is misleading in the context of this thread.

Actually it is clarifying, since the headline number number "86% discount" is misleading itself - 86% of what?

If the percentage discount is reduced, but it is a smaller percentage of a bigger production number, then overall mass balance is the same

Edit - in this particular case i forgot again about the mass loss from the wreck, because of this any additional mass you put in from assistance will not be reclaimed in full, so the efficiency will be less

@black_wriggler The thread's name is "86% mass discount", which is not true once you start assisting the factory. And if you intend to reclaim the build units to get the saved mass as actual mass, you also get less if you assist the factory.

Well maybe you should reply to my post and not the thread title then? I already mentioned how using this setup to build highly discounted units and reclaim them is a very poor use of your APM late game when other options are readily available.

Yes if you assist the factory in this setup then the mass percent discount is lower, but a better way to look at it is you are capped at a 'free' 25.8 mass/sec from the fully ringed factory making a strat. Assisting doesn't change this amount, you just get units faster. Of course you have spent 16.8 k mass in fabs to get here (not counting the energy to run them...) so this is really why it is such an inefficient choice ! And why you want to surround the fab with factories and not vice-versa.
(actually wreck reclaim is 81% of this, so only 21.7 mass / sec !)

however if you are using adjacency for its intended purpose, discounted production of stuff you will use and not simply reclaim, then feel free to assist any adjacent factories since this will not affect the bonus they are providing to your overall eco - just don't stall hard

It is true, if you say you get a 80% reduction in unit cost.
because once you assist your factory the finished unit will have cost more than 20% of it's cost.
But yeah the mass saving per second stays the same.

well probly the wording could have been better, but at least for mexes you are comparing factory adjacency with the alternative, which is generally the bonus income from storage.

so assisting the factory doesn't affect the same mass per tic saving you get from the mex, so doesn't reduce the adjacency :), roll off time will be greater however

Surrounding a t3 factory with t3 fabs is a terrible waste of their adjacency potential, even if you are getting effectively 'free' units late game you have much easier eco options such as mass fab templates or especially RAS com spam which doesn't require destroying and reclaiming your own units!

Using a grid to make units is efficient but once multiple t4s are on the field then t3 armies start to struggle.

A much more interesting use of t3 fabs would be early in the t3 phase to scale your unit production harder, using the opposite layout with a single fab surrounded by factories. Making percies or bricks the fab would save nearly 20 mass total a second, in addition to the generated 16 you are net 36 mass, which is two t3 mex upgrades!

Admittedly you need to power the fab and it probly wants a t2 shield if your team doesn't have air. So need an early t3 pgen - or possibly ACU RAS could work.

You can even get funky and include mex adjaceny: 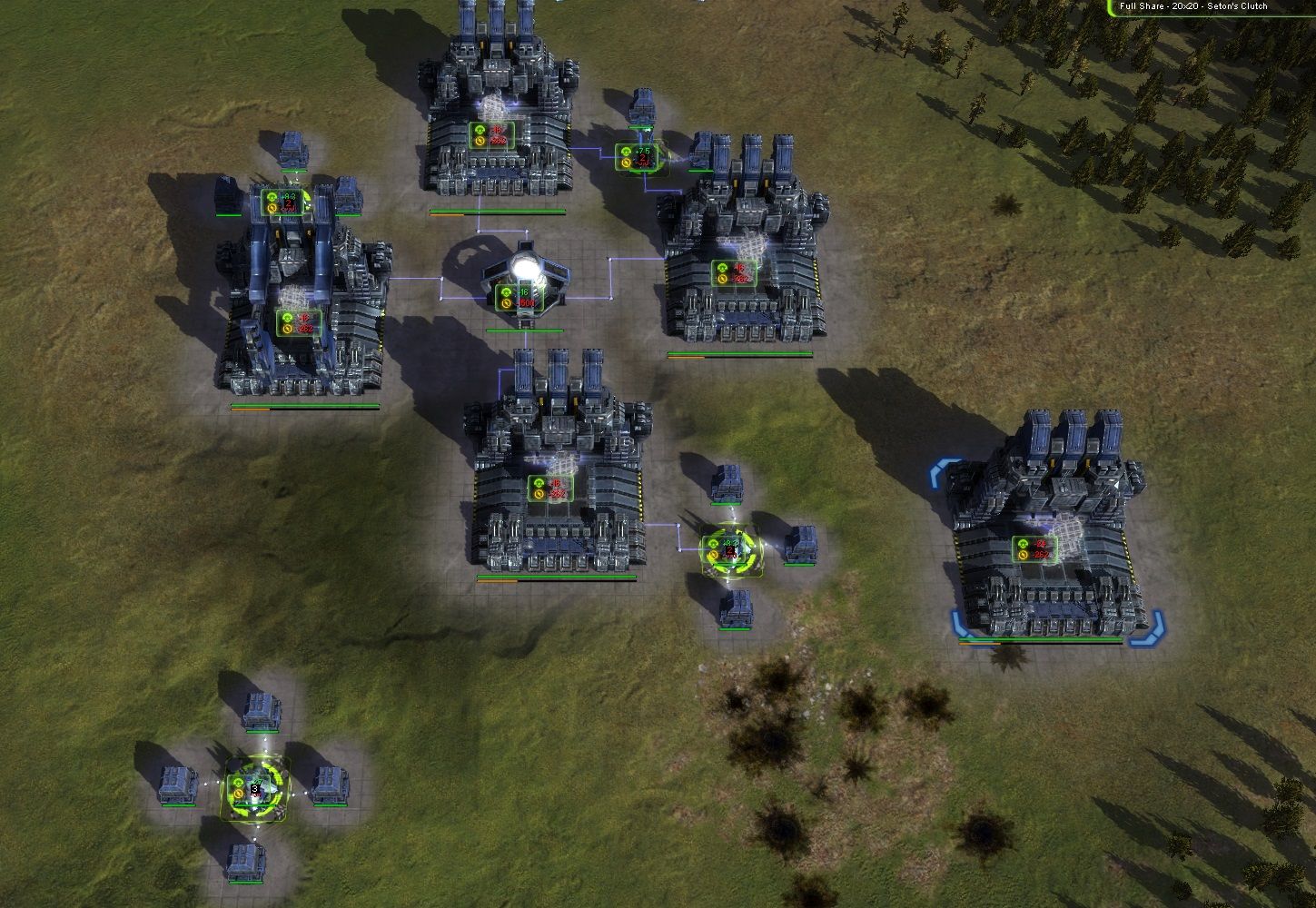 Here you are effectively getting three t3 units for the price of two. It is pretty rare to get a layout for four mexes, but three is pretty common and you can do two with any single mex.

Four storages would give 3 mass but here are they are saving nearly 10. Again this relies on you constantly building units to get the benefit, but it is not true that assisting the factory will reduce the adjacency - you will still be saving the same mass per tick than you would unassisted, it is just that you get more units in the time and so the mass saved per each one is less.

What will kill your efficiency is stalling mass, if you are the kind of player who stalls for half their total income at this point in the game you are going to lose a third of your adjacency bonus, and should probably just build the storages and t3 mexes instead

posted in General Discussion •
RE: Talking about the Fatty

I think reducing the size of the bubble shield would help vs T2 arty and reducing the long recharge time would also help vs air.

Would not like to see a personal shield instead as this would change the character of the unit too much.

posted in Balance Discussion •
RE: T1 bombers are too good at hunting down expanding engineers

posted in Balance Discussion •
RE: Shouldn't T1 Torpedo Launchers have some advantage over T2?

You may not be aware, but T2 Torp defense currently has Personal Stealth - for all factions. Being a fixed structure means it will remain on your strategic view as soon as you get visual on it.

But if you make it mobile, even the slowest supported speed which is 0.1, then you will need current vision / Omni to get a bead on it. Making it very slow should prevent using it as an actual unit to attack with.

posted in Balance Discussion •
RE: The Problems With The UEF - Part 7 (The Ravager)