Best posts made by BIG-BENNIS-MAGIC

I think map gen in ladder pool is great and I'm sure it would greatly increase ladder acitivity much like TMM brought back people to the game.

I think its something fresh and new and thats what video games need to stay alive.

Therefore I recommend easing your usual selection criteria for ladder pool in favour of map gen. Try it out, you wont be dissappointed. And if its shit and people complain: ooohh kkaaaayy remove it the next cycle.

In teamgames T3 mex is the winning play, most of the time. Setons meta, dual gap meta (the most played maps) degrode into T3 mex simulator. Canis, Wonders, all these maps are T3 mex simulator. Even in 2v2, after initial skirmishes, gameplay degrades into T3 mex and try to get somewhat useful ways to spend mass style.

RAS COM is just another symptom of the problem: you can get away with T3 mex gameplay because it pays back too fast and unit speed is too slow for the aggressor to be able to convert his early investment into substancial damage before defendant has enough BP and mass accumulated to formulate an effective defence.

This is further amplified by reclaim values being very high at 83% which makes it even harder to aggress.

This also devalidates T2 stage in teamgames entirely. In 1v1 this is less of a problem as most fighting occurs in T1 and T2 stage, but a T3 mex nerf wouldnt hurt 1v1 either as it will just extend T2 stage further which is probably a nice thing.

Its a problem because it limits the meta. Problem should be evident and doesnt need showcasing.

Obviously, if T3 mex is more expensive it increases the duration of the window for the aggressor to deal damage. It also adds a small challenge for the T3-mexist to defend his precious mex against units, he cant just rely on travel time of units to be too high to be any threat. Thats why air is so strong: the mass investment immidiately pays off as units dont need to walk across the map. unit travel time is airs benefit, not its balance of strenght relative to AA options. (nvm T3 MAA is still mostly useless)

I think the recent bomber and lab changes have highlighted what faf needs: more options that reward aggressive gameplay. These changes have been a welcoming touch to 1v1. But for anything with more players this doesnt cut it. Mass enters the game too fast, and the reason is the many efficiently teched up mass extractors that pay off too quickly. One eco noob with T3 mex can wipe a wonders with fast T3 mex rush + GC, Chicken, Megalith when the rest of the players go full out aggression and naturally dont eco. Because all he needs to do is survive for 10 minutes.

For once I have to agree with thau. Math in its simplest form has finally defeated psions.

posted in Balance Discussion •
RE: Why would you have left FAF?

What I noticed was very powerful was to pet new players, take them under your wing, personally approach them. If you throw them into the cold water with lobbies such as "500+ NO GREYS" where a new player who managed to win his first two games get called out as a smurf by garytheubernoob and his cronies can be very disheartening.
It might sound rediculous - but I think there are enough people up for the job - a sort of mentoring program could be a powerful tool to retain people. If you are new, then you should be approached by a mentor who gives guidance, explains rating system, how to find good games, basic game mechanics etc. I did that to a few people and some of them still stick around. Maybe add an add to the opening page of the client: "YOU ARE NEW: GET HELP HERE" and then a list of people to approach. Maybe put new players in a special IRC channel #new players where mentors sit and ask questions. I know that from games like eve online. I think approaching people personally is the best way to get someone involved, to feel acknowledged and it takes away the frustrations from not knowing anything in the beginning.
I think fafs biggest asset is the dedicated community members it has, people willing to put in work and explain stuff - connecting these ressouces to new players is a task that im sure will boost new player retention.

Could you please substantiate your argument? Frankly right now your posts look like nothing more than shitposts. I completely disagree that mex price is a fundamental pillar with complex interactions thats shifts it all. It literally only affects timing of aggression vs defence. All units stay the same. I think my analysis is fairly complete. TA lore isnt a reason to leave mex income and prices untouched. At the end of the day we need to ask ourselves why faf has become slow and static and wether we want that. Making eco a worse option makes units better. And i think faf should be about making units and using them right and not about making mexes and firebases.

How many games people where surprised in teamgames in the following way:

"Oh no my opponent made units. I might have a problem"

I think its known: hard to see which carrier carries how many units, hard to see in general how much progress carriers made when you produce strats or torps in them from zoomed out look. how about a little number on top of them, much like mex overlay or nuke progress? Would be a small yet very convenient improvement. 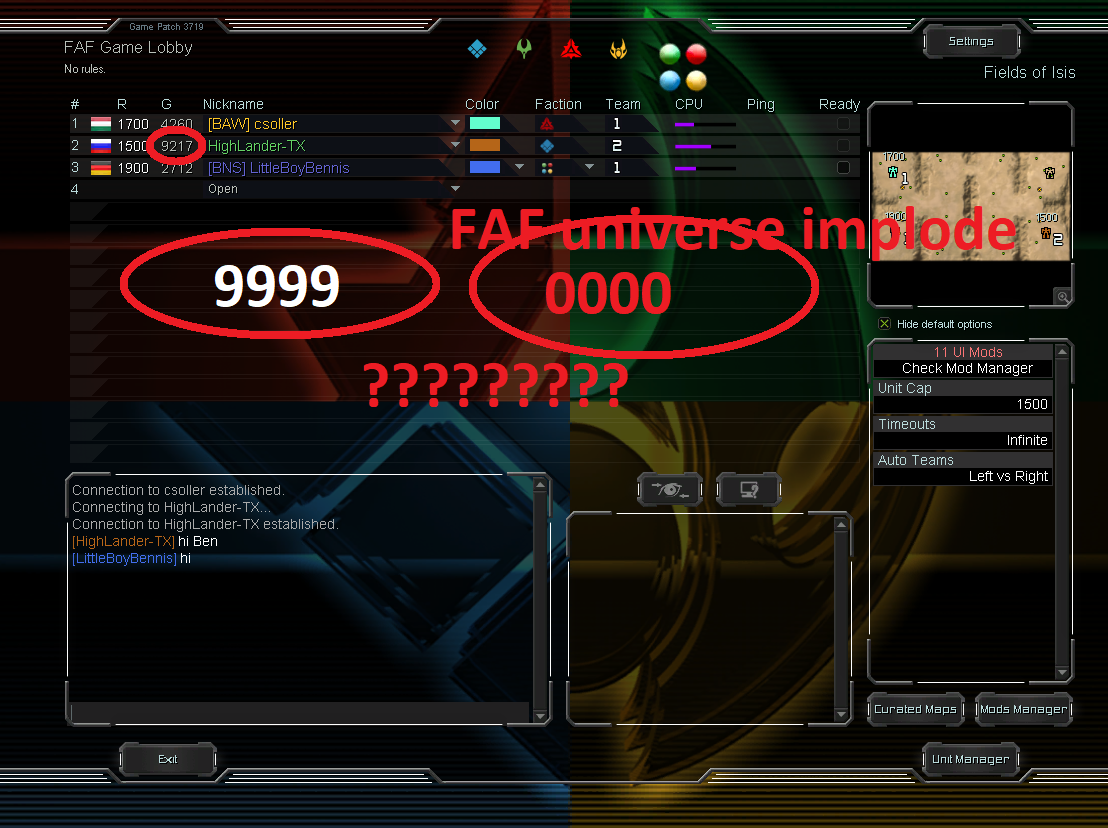 Are you gonna match the client to add another digit to the game count row as tribute to highlanders COMMITMENT to faf?

YOU GONNA AMEND THE CLIENT TO EQUATE TO HIS GREATNESS

posted in General Discussion •
RE: The Last Thread about RAS SACU Balance

I would say: remove it. What good is it doing to the game?

posted in Balance Discussion •
RE: (A)RAS: reduce nearby building consumption to zero

I on the other hand think its a cool idea, basically a 100% adjecancy bonus, maybe on acu support. That's kinda cool! Would yield at best 40 mass (nuke), or like 32 (strat??) And render acu useless in the process. I think Its a fun idea, but wouldnt really promote exciting gameplay (have acu in base supporting a single thing - lame and reduces choices)

We should have an environment here that rewards people for having ideas and sharing them with us, if they are new and somewhat thought out. Not talk it into the ground with a somewhat condescending tone! Not what a councillor should behave like!

Jk I still love you but its still meh behaviour.

posted in Suggestions •
RE: Ice is a failure

Latest posts made by BIG-BENNIS-MAGIC

I think map gen in ladder pool is great and I'm sure it would greatly increase ladder acitivity much like TMM brought back people to the game.

I think its something fresh and new and thats what video games need to stay alive.

Therefore I recommend easing your usual selection criteria for ladder pool in favour of map gen. Try it out, you wont be dissappointed. And if its shit and people complain: ooohh kkaaaayy remove it the next cycle.

posted in Tournaments •
RE: Merge engineers into support engineers to circumvent pathing issues.

Or station them in it. Like in a carrier. So you can get them out and to another one.

posted in Suggestions •
RE: Merge engineers into support engineers to circumvent pathing issues.

Hey I have an even better idea:

posted in Suggestions •
RE: Merge engineers into support engineers to circumvent pathing issues.

I think by the time you have 50 t1 engis clumped up at some factory your mass income is so high that a few percent more or less in bp mass efficiency dont matter anymore. You can just control k and reclaim the t1 engis and make new ones. but that takes time and apm and this move wouldnt be apm efficient anymore. I think that's kinds a cool metric by the way: what kind of apm is most conducive towards victory. Acu play, macro or unit movement. Brb watching some zock POVs

posted in Suggestions •
RE: UI mod guide for the improving player

I use eco manager for only for mex overlay. That's very useful.

posted in Modding & Tools •
RE: Vote to kick system

I think this is a good suggestion. Sometimes people die in teamgames and minimize the game and forget about it and then start to lag. They can even without intent completely render games unplayable. This option would allow for the players to rectify such situation without the need of moderator intervention.

posted in Suggestions •
RE: Team Matchmaker - hard to get games to develop rating

Dude just play a few 1v1 games and you will lose your rating in a matter of minutes hint hint.

posted in General Discussion •
RE: UI mod guide for the improving player

I completely disagree with your position on strategic icons. It highlights high impact info like nuke, smd, tmd and therefore makes it less likely to not see a nuke, and makes it easier to detect unprotected areas. It is therefore a risk reducer and time saver, time that can be used elsewhere to improve play. The negatives "clutters screen" are not true when used on small icons settings. Maybe give it a try bh on small settings.

Hp needs to be looked at, maybe less than 4 t1 engis combined to make them comparativley vulnerable as t1 engis as you would get raid and bomb protection for free which isnt sup com like to get a mass worth benefit for free.

Its a good improvement for lategame sim speed and pathing issues around heavily supported facs like navy.

I think its a step forward like engi mod.