Yeah I understand that part, but I still think it's too cheaty. However it's not my call to make which is why I said to talk to Biass

This isn't perfect, but I updated kyro's for UI scaling, and few other things that didn't work. It still has issues though which I cannot fix, such as colors not always assigning correctly. Works fine for me otherwise. You will have to rename it from txt to lua since it wouldn't let me upload it otherwise.

@macdeffy ah thank you,can you also send me a downloadable link since the old forum is down?
find me here-Resistance†#1630(discord)

Hey @Dragun101, is it possible to add a mod or edit this mod to create hotkeys that cycle through these icons that appear when you have a unit selected:

And preferably these icons if it's an ACU/SACU:

This will mostly just allow quicker upgrades, so perhaps just making bindable hotkeys for various upgrades would also be good?

UI mod idea: a patrol that does not make unit follow enemy units. so basicly move orders instead of attack-move-orders.
uses:

A mod idea i had: 'back-off after shooting command', basically attack-move with a twist for slow firing units like mmls/snipers/ships/arty.
It will 'attack move' to specific location and after after using a shot will move units in opposite direction for half time of firing cycle and will use attack-move to same place again, repeat until arriving to attack spot. This can be considered a bit 'cheaty' cause squishy slow firing units won't stand in same place waiting for arty shot each time they encounter enemies.

Techmind what your discord username btw?

I'd love a mod that makes players on a team all have similar colours if possible please. So Team one would be light blue, dark blue, light green, dark green, turquoise and team 2 would be red, dark red, pink, orange, yellow for instance.

I get so confused in team games and the built-in option turns the entire team the exact same colour which creates its own problems.

In case it's relevant I use this icon mod already so please only spend time on it if they would work together. https://wiki.faforever.com/index.php?title=Advanced_Strategic_Icons

Thank You! I Love it, The Whole reason the Rainbow Tourny exists...
is I hate seeing mixed colors like you mentioned.
My OCD with this has me even sorting colors when I play AI solo.

These are the colors for the Rainbow Tourny going on now,,
finishes on Feb 6,,
watch streams on faflive twitch and others to see your idea in action. 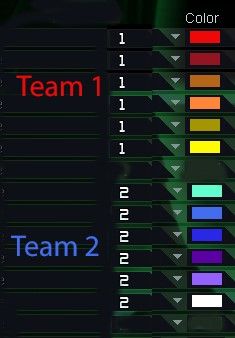 Techmind what your discord username btw?

"a bit 'cheaty'"
no, its cheaty and would result in a ban if used in competetive games

I would like a mod that adds a sound effect when one of two things happen:
(1) someone on my team sends a team-chat message; or
(2) anyone in the game sends a chat message to me only

From watching replays I see that during the game I won't always notice when someone sends me a chat message. It would promote better teamwork if a sound cue helped me to notice the chat message.

It would be best if the sound effect was subtle but also completely unique, so a player would always know that it represents a chat message.

can we get an UI that disables chat and marks at the same time?

can we get an UI that disables chat and marks at the same time?

Probably y can just destroy chat window's handler + replace default chat-sound with null-sound, but this would be game mod like 'kyro's lobby' which would not be installable from vault.

it would be easy to remove chat from showing up (all chat, or according to specific rules, like muting a list of players). The ChatBeep mod in the vault almost shows you how to do it.

it's probably equally easy to remove "pings" from showing up, or at least to take their sound away. again, it could be done according to specific rules, or it could just be muting everyone's pings

I uploaded it with @Uveso 's permission

I'm calling it a "lite" version of Uveso's ChatBeep mod, rather than overwriting the existing ChatBeep mod, because it does some things differently:

-A different noise (it's not really a beep, it's a chirping noise)
-It doesn't chirp for global messages because those usually aren't worth reading
-It won't chirp more than about once per second even if there are lots of messages
-It has different configuration options