This topic has been deleted. Only users with topic management privileges can see it.
last edited by Lu7ky
1
L
Lu7ky

Today, as the first entry to this article:
With Traitors setting is enabled, any player defeated will be forced to give all remaining units and buildings to their killer.
If the Defectors setting the highest scoring player (ally of foe) gets the units.
This is how you can set up and play Traitors and Defectors .

As the title of this post suggests I would like you to mix up your games.
I hope that as you read this you can keep and open your mind further.

I am going to be suggesting many mostly uncommon game settings, maps, mods and modes over time. Of course I would encourage everyone to do the same to the best of their abilities.

To start us off I am going to lay out 2 settings you may not know you had available.

With this setting enabled, any player defeated will then be forced to give all remaining units and buildings to their killer. This function is very similar to that of "Full Share" under the same drop down menu.

With Traitors, you will need to be more aggressive and more defensive in your tactics.
Create a 'snowballing' effect by taking out an enemy with a large army.
Make your enemy need to change tactics putting them off edge by eliminating a player who may have been their counter.
Set up new and more diverse bases faster with inherited enemy factories, economy buildings and units.
Put your opponents on a two front war with the remains of another player killed behind or beside them.
Boost the morale of your team by taking out major players and put fear into your enemies by bringing the might of an extra army to bear.
Reinforce yourself and avenge any units fallen in successfully taking out an opponent.

This sounds very simple and it is, once in a lobby you are ~3 clicks away from a Traitors game.

Very similar to a Traitors game, Defectors: offers nearly everything the same only the highest scoring player, allied or not, even if they did not assist in or make the kill will obtain the remaining buildings and units.

Whether or not you allow the score to show or not will be up to you!

Cons:
100% Ineffective in 1 vs 1 and unified team games (ex. Survival).
May not play well on maps where opponents teams are bundled too closely.
While most effective in "Assassination" other victory conditions may not play as well
Encourages snipes over the usual spam.
Encourages 'picking on the little guy' when not all players are equally matched.
If mods that have similar and automatic functions to this are used or enabled they will cause interaction problems.
Players may choose to Ctrl+K (force kill) their units upon their defeat to cheat the system .

Check in for future additions here as I shall personally update this as time goes on.
I encourage you to comment with your findings and suggestions.
Further posts from me here will not be as long should detailing them allow it.

Thank you for your guidance in this, community & staff.

Problem is Ctrl+k exists and so do auto base give mods which iirc both cause interaction problems with the share setting.

Yes, the Ctrl+K can be a problem in any game with this. I will add a "Con" about the auto give mods, are those UI or SIM?

They are ui mods.

Yeouch, added to the Cons list either way.
Thank you for the feed back and information I look forward to more on this and in future postings.

Ftx could they added as an bannable exploit? If someone does that in a traitor/liberator game?

TBH I would also like to see that happen but did not want to be the one to say it first.

I wouldn't. Stupid to make it a player responsibility to operate within the confines of a poorly implemented share condition. Doesn't take a lot of brainpower to recognize that ctrl+k is a thing (not to mention it is literally the right thing to do in a variety of game situations) and that it would interact with such a share condition. Exploits typically are more obfuscated aspects of the game you REALLY need to focus on in order to abuse (terraforming, giving units to lose orders, etc) not just a basic game mechanic tons of people will unintentionally manipulate.

With the auto share methods noted as well, I ofc discourage this kind of behavior but someone may really focus on the abuse by developing and using an auto Ctrl+k UI mod.

New Entry: King of the Hill mod by user: Jip

King of the Hill (often known by the abbreviation KoTH) does not always involve literal hills rather, metaphorical ones. In this mod you (and your opponents) along with any teams made try to put as much mass value on the center of the map to score points and ultimately win the game.

(The built in KoTH mod is currently out of order and will not generate the hill.)
Fun fact this mod was made to replace what is currently the built-in version! ~ Jip

Found under the Mods tab within the FAF client with a brief search you can find this mod quickly.
Below is one way of how to do so, please note position(s) may vary in the future. 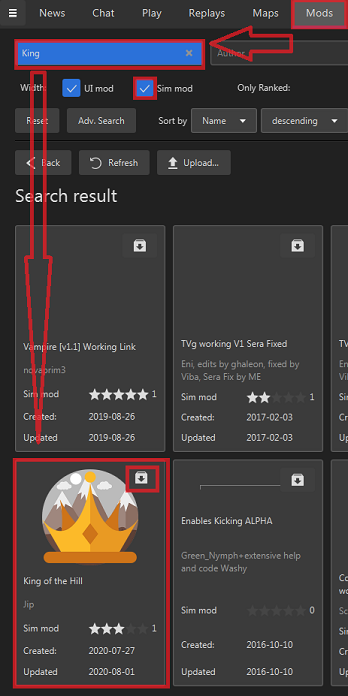 The mod functions by drawing a circle in the center of the map (with default settings) where units are recognized by mass cost (extra for your ACU). The hill is owned and scores are earned by the team with the highest number (above a certain increasing threshold). It can be contested by any other player or team. The team with the point under control will have a mass income penalty while simultaneously gaining a benefit decided by the host in the lobby (only one may be set if any and may not be changed in game).

All teams will start with their faction at T1. The team owning the point will receive points over time. Points will automatically unlock T2, T3 then T4 with the currently leading team getting their respected tier first.

The player or team reaching the goal amount of points will receive the win should there be any opposing players left.

Map choice can make this play out very different each time.
Putting your ACU on the point or general flanking the point can be very dangerous but rewarding if done correctly.
Set up long range fire-bases to remove or keep the enemy off of your point!
Spam is important but lower mass value units will not be as effective later.
Pick a strategy and commit to it as you opponent may have all of their army in one spot.
Forge temporary alliances in games with more than 2 sides to take down those closing in on victory. 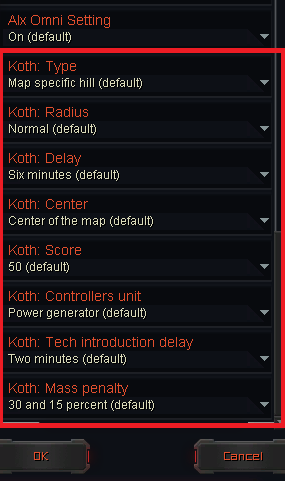 Cons:
Does not pair well with 1 team games (ex. Survival).
Only loosely affects 1 vs 1 games.
Requires download from all parties and will not appear in custom games by default (Check the "Show Modded Games" box under the Play tab).

FAF Specific. (Though those here are likely from FAF.)
Always un-ranked.
AI do not play well with this mod.
Map choice dependent (prefers multi path maps).
Discourages land only settings (only a con to some).
May not pair well with heavy resource or unit mods.

A nice surprise to see the King of the Hill mod in here!

@Jip Thank you greatly, please try to update me when you do so I can test and update this article.
What it appears is the points shown as required are up to date while the actual are not and T4 is equal to that of the cap (game ends at same time it is unlocked).

@Lu7ky I already had a fixed version on my local storage - uploaded it. It contains:

I hope to see a game or two - it would allow me to continue the development! As without testing things become a bit of a gamble.

Fun fact: this mod was supposed to replace the built-in version

@Jip Nice, I think I shall work that fun fact in now and check out those options, i assume the download the same one (will be checking either way)

Yes - it is a new version of the same mod. Make sure to uninstall it first if it doesn't allow you to install

@Jip Done, I did the manual way of going via the mod tab just in case thank you.

Just make traitor / etc mods override the "give option" by employing the same logic as the "auto give" mod, but running first. I assume if you are hooking two mods on the same LUA portion, then one will override the other, or their will be some sequence in which is processed first?

Hell, you could also just create a hashtable that logs all units on construction and death, and player ownership and use that to get around it.

Shouldn't be an issue processing wise so long as you don't go around creating memory leaks.

@Psions Tbh it very likely will be a huge thing to code especially as Traitors and Defectors are built into the vanilla game. That is if (and I heard we don't) have full access to the original game's code.
To do this we would most likely need to recreate the mods from scratch then employ an override to the game's settings and any user created mods. This again though results in full access to then adjusting the original code.

Where have you gone Lu7ky?