This topic has been deleted. Only users with topic management privileges can see it.
last edited by
4
A
arma473

The web site needs a description of the four factions.

The image below shows what is currently on the main page. If you go to faforever.com and scroll down you will see this:

We should come up with better descriptions for the four factions.

Before we can do that, we need to decide what purpose and tone this section of the web site should have and who its intended audience is.

I think the audience is: people who haven't bought the game yet or people who haven't played FAF yet. I think the tone should be serious and I think the purpose should be to convey a description of the history/origin/nature of each faction, to describe its units both in terms of aesthetics and function. Ideally in a way that shows consistency between those things to convey that each faction has a consistent personality, and hopefully to drive people's interest/imagination in playing with at least one of the factions because they like its style. And the text should be short or people won't read it.

But other people might have different ideas about what the purpose/tone should be. Part of the reason to make this thread is so we can discuss that.

In no particular order, here are several candidates:

Current version at faforever.com (the main page, scroll down to see it)

UEF
Chunky mechs and tanks, jets and all the other classic war toys. For those that love vanilla-warfare.
Cybran
Stealthy and fast spiderbots, walking ships and pointy structures. You like being the edgy guy with spikes.
Aeon
Floating alien tanks, shields on everything and space donuts. You want to sweat microing your units.
Seraphim
Chicken ACU, chicken assault bots and chicken experimental. You want a balanced army of chickens.

From @magge:
UEF
The United Earth Federation is a powerful human faction aiming to unify a splintered empire through conventional weapons. They pack a powerful punch when it comes to damaging structures with their artillery, supported by satellites. Or defending outposts with their unique Tier 3 rotating Gatling gun as point defense.
Cybran
Cybran units are often insect-like in appearance. They use laser, stealth and cloaking technology more than any other faction. Their stealth bombers are powerful and if their naval has killed everything on sea, some ships can simply walk on land to carry out even more destruction.
Aeon
Humans who follow the philosophy of the aliens. Their experimental unit Paragon can generate nearly limitless resources, but if it explodes it causes a nuclear strike. They use hover technology and can nullify shields or use guided missiles which are fragile, but do very high damage on impact.
Seraphim
Religious aliens who came with superior technologies to cleanse the galaxy. They have multipurpose units, the strongest shields and a gigantic experimental Bomber. The experimental building Yolona Oss creates the most damaging and devastating strategic missiles ever seen.

From me @arma473
UEF
Order: The United Earth Federation is the successor to the empire that once controlled the galaxy. The UEF imposes its authority with durable armies designed to control territory.
Cybran
Freedom: The Cybran Nation began as a cyborg conspiracy to liberate workers enslaved by the Earth Empire. Because it began as a resistance movement using hit-and-run tactics, its armies are fast, stealthy, and versatile.
Aeon
Purity: The Aeon Illuminate is a religious order based on devotion and sacrifice. Followers of "The Way" are zealous and single-minded missionaries. Aeon units tend to excel at only one single purpose.
Seraphim
Revenge: The Seraphim are alien invaders from another dimension. Seeking revenge for a bio-weapon attack by the Earth Empire, and fearing humanity's genocidal intentions, Seraphim weapons create overwhelming destruction.

I'd broadly agree with you in terms of focus/tone - i.e. I think it should be aimed at newcomers, and try to convey both some of the lore and some of the functional differences/themes of the factions in terms of units/gameplay, but without being too wordy. Due to being aimed at newcomers, my preference would be to avoid references that would seem strange to non-FAFers (such as references to flying donuts and chickens).

If 1 word faction words are used I'd prefer keeping the Unite/Liberate/Cleanse words to align with the original Supcom faction art (https://www.deviantart.com/generalyin/art/SupCom-Three-Factions-50914447)

In terms of the suggestions other than my own for the actual text, I'd be happy with your suggested wording in terms of length and content (my only comment being the '1-word' start of each bullet per above); For Magge's I'd favour a slightly streamlined version of the current text so it's a bit shorter.

if I were to change something about maudlin's which I think is best of above:

EDIT: no point describing the looks of units because you can just show them

No, keep it simple and short. We aren't making a fucking book over here.

ThomasHiatt
This post is deleted!
Reply Quote
last edited by
0 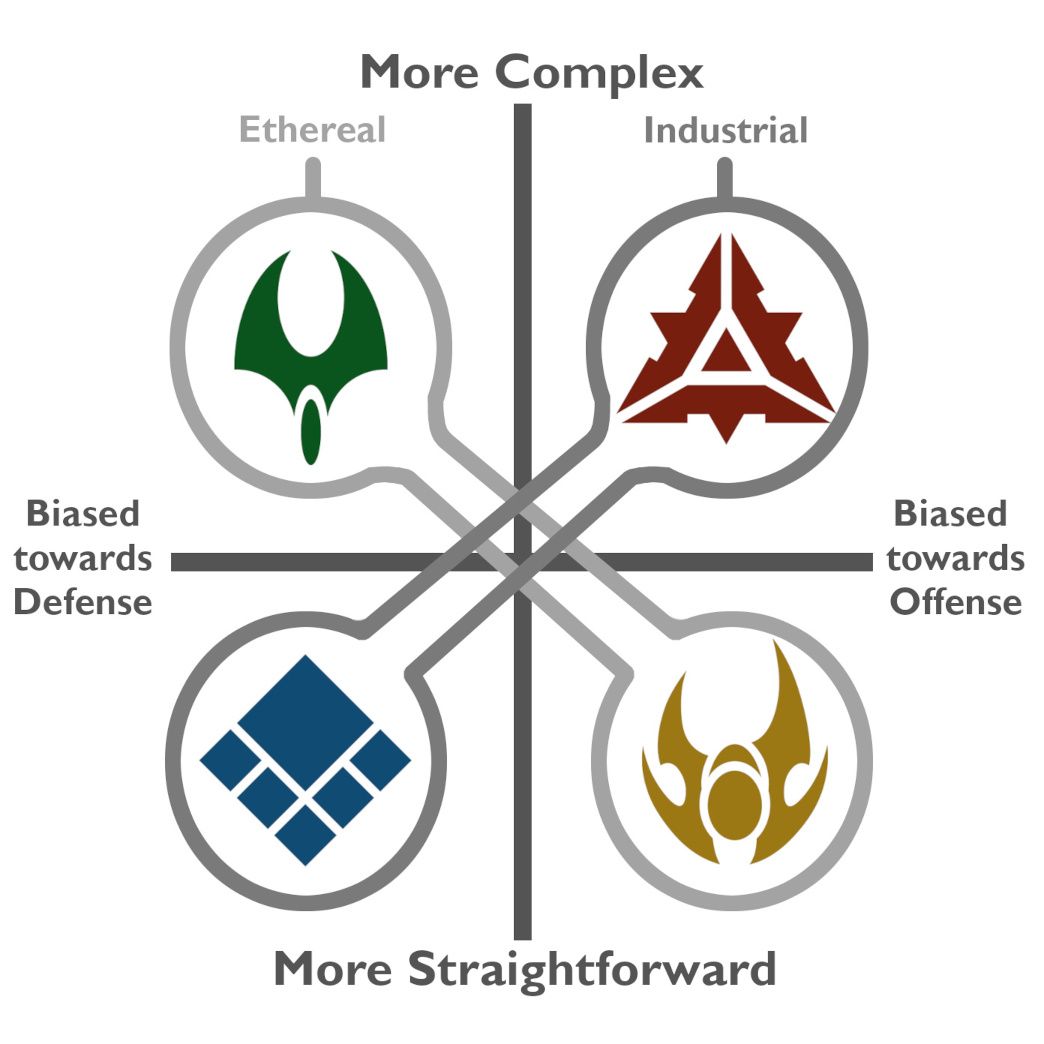 I think something like this could also help people with choosing a faction based on their playstyle since it's kind of hard to characterize exactly how each faction feels to play, especially Seraphim (they have aspects from all three other factions, but they seem to take the tankiness of UEF in a more aggro direction most of all)

ThomasHiatt
This post is deleted!
Reply Quote
last edited by
2

almost none of the attempts to describe the way factions play are 100% true.

UEF ranks 3rd in shield HP, and their land units at tech 2 and 4 are the squishiest across the board. Percivals are matched by bricks, so they don't stand out.
Cybran land units are slow at T2, loyalists are fast but they're matched by titans so they don't stand out. Cybran being stealthy is true
Aeon doesn't have highly specialized units. It's literally just the absolver
Seraphim is the most vague of them all. They're described to have "multi-purposed units" (what does that even mean?) and highly advanced units? Their mass costs and strength are comparable to other factions, with the small exceptions of the ilshavoh and mobile t3 shield

I would recommend sticking to describing a faction's lore and keeping it at that. It's too hard (impossible?) to give a short and concise gameplay description of each faction that actually fits it

Mach
This post is deleted!
Reply Quote
last edited by
0

Mach
This post is deleted!
Reply Quote
last edited by
0

Zeldafanboy
This post is deleted!
Reply Quote
last edited by
0

SpikeyNoob
This post is deleted!
Reply Quote
last edited by
0