This affront to SNF will not be tolerated!

i think this was a fun, creative and interactive way of garnering people's view on maps.

clearly it worked as it received tons of traction

NOTE: Ndera was not worthy of B tier. After a second experience on this map, I'll have to drop it to C or D tier.

Going through the above maplist, I got the impression that the list is rather incomplete. In my understanding, the list contains all(?) potential tmm 4v4 maps regardless if they are currently fit to use (e.g bugged mexes, terrain issues, bad spawns, not odd vs even...) or of questionable quality (gameplay, aesthetics). If the the mentioned list is used as argument that there are currently no other/better maps to draw from, then there should be a special focus to have a list which is as complete as possible (leaving out the super trash stuff ofc). That said, I think there are quiet some potential maps which are currently missing on this list.

Some potential maps which come to my mind (again, those may need to be fixed in one way or another):

I am not saying all of the above maps are super great and should be included in the 4v4 map pool - but then again, thats also true for quite some maps in the mentioned maplist above. Imo its important to have a good and "complete" overview of potential maps as a base of discussion.

Finally, if the state of finding good maps for tmm is so dire, perhaps a map making tournament for good 4v4 maps could help resolve that issue to some degree.

capella six have tons of unbuildable mexes and obnoxious amount of dense reclaim, hutts and sr islands have very awkward path finding that makes them unplayable, krakens nest have some terrain issues but dont remember where.

That may be the case and those maps would need to be fixed before they could even be considered for tmm. However, the maplist provided by Morax lists 18 maps (out of 88) having minor or major issues right now, so being fit to play is obviously not a prerequisite for maps to be on the list.

That may be the case and those maps would need to be fixed before they could even be considered for tmm. However, the maplist provided by Morax lists 18 maps (out of 88) having minor or major issues right now so being fit to play is obviously not a prerequisite for maps to be on the list.

Who is going to fix them? 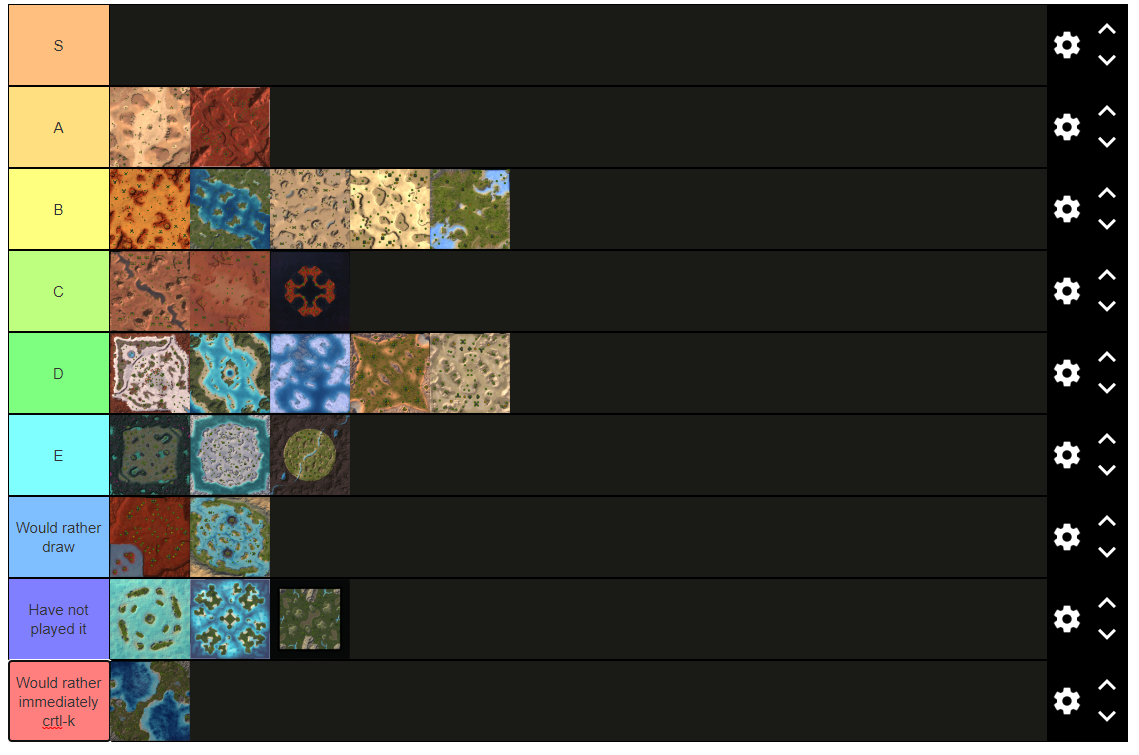 @ftxcommando then setons would be in E

Why would you say that if you put the map in the “E” category which is basically the worst rating??

@morax
Because it was imba with the bottom team having an extra mex; It is generally good to see that maps are fixed regardless of whether I like them or not. Equally I think it is a nice map, but it is a 5v5, with the air spot unpopulated and the fact no one really knows what they are doing on it because of that makes me not want to play it in tmm.

Therefore it gets an E.

This is really helpful feedback to the team!

We have a limited amount of maps that work with the matchmaker as most authors never knew 4v4 would be the main form of pvp until this past year. To compensate for that, sometimes we use 5v5, 6v6, etc maps that are viable for play, and with the current trend in 1500+ wanting a lot more mexes it helps.

I have had games on falcon where people fight over who gets the “unused spawn” and it is frustrating.

Bare with us for a bit as we update our map lists and direct new content. I’m working on my own new 4v4 map and will take this advice when designing it.

Thanks a bunch for the detailed explanation. I wish everyone here would state why they rated certain maps in the best/ worst category. 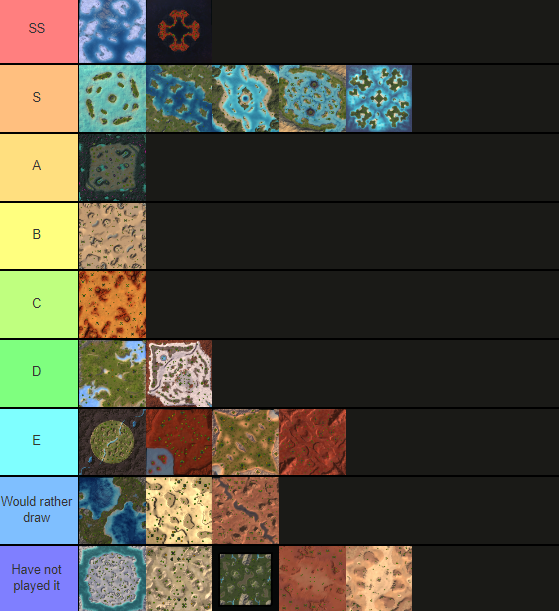 Chokepointy/maps played to the death (Canis, Setons, etc) make me just want to ctrl-k because some other dude prob played it 100 times and knows much better what to do. Plus I dislike maps where all the bases are together too...

Luckily bermuda saskiya crateria and mars don't have their spawns together

Every 20km water S+ but setons is in "would rather draw" solely because 5% of the TMM players is gonna be better at it?

bully skipped over the famous water map of primus alfa

Every 20km water S+ but setons is in "would rather draw" solely because 5% of the TMM players is gonna be better at it?

I rate the maps similar to javi, and for me this comes down to:

If I win navy on those S rated maps, I can destroy all/most enemy bases and win the game. This feels rewarding and I like it.

If I win navy on my half of setons, the game will often drag out for another 30+ min, and my team might lose anyway. It's a real struggle to close out a setons game. Now, some setons experts will probably immediately reply that I'm just bad at setons if I can't snowball a win on my lane into a quick and easy game win. But that doesn't change the fact that I don't like the map and would rather draw than play.