So this following suggestion is mostly sarcastic:
Make T3 Support HQ Land Factories Cheap. Like Super Cheap and Fast to build. And better BP. So deploying and setting up a T3 Land Proxy can be done quickly, cheaply and efficient. Perhaps increase of T3 HQ's Land. Half the problem as folks said is travel time/deployment of T3 Units in mass. If you make it 'easier' to setup a late stage T3 Land Proxy Base, so you can bump out units and transition to units there faster it might be easier.

The topic of defenders advantage is a failed T3 Push, while bad onto itself, is only made worse with reclaim. So having reclaimed values as you tech up get scaled down/I dunno. But words let me rephrase:

One of problems of land is end game, both travel time to deploy land forces (can be scouted and responded too), and ever increasing mass, a failed push gives an opposing player. The deployment is due how for variety of reasons important buildings like T2+ factories tend to be in someone main base. And then despite engi mod, I noticed (once again shitty 1k global) still tend to hyper assist hyper tech factories with engis vs support factories. And to do that you need the BP, which tends to once again be in your main base.

Words this shitty 1k global thinks, maybe it worth considering looking at relationship to support factories and HQ's again. If part of the problem is deployment of T3 Units (if current status of T3 mostly as defensive tool is not desired) to battlefield. Is looking at removing the deployment aspect of T3 in some shape or form. Making T3 Support Factories cheaper to build, deploy and utilize in mass. Another aspect of this while raw cost is important too obivously the drain of unassisted support factories. Reducing there raw BP by half. As that make their eco per second comparable (when unassisted) comparable to T2 Land factories.

This would make it easier to deploy T3 Units using support factories and makes going from a T2 Factory to T3 Factory not result in a significant increase of economic drain. A similar type of relationship could be done for T2 Support factories and T2 HQ factories with build power, mass and energy cost reductions. Or atleast make T2 Support build straight from T2 Engies faster than T1 Factories built by T1 engi upgrading to T2 unsupported.

Also if curious its faster to build a T2 Factory with a T3 Engi then support it to a T3 support vs building a straight T3 Support when built by T3 Engi. (Upgrade Commanders building support factories are faster than lower tech + upgrading). Words.

I don't completely disagree with what you wrote. I think you're heading in a decent direction.

However you have to be SUPER careful.

Because if you change something like build speeds for T3, its not just going to affect the super late game, where you're facing T4 assault experimentals.

Its going to affect the T2/T3 transition as well.

And that is one of those things that you really don't want to screw with, because a lot of people believe its in a really good place, myself included.

So fixing this by effectively lowering production costs probably doesn't work, because its just a more complicated version of a build time buff, and that WILL affect T2/T3 balance. It will for example encourage T2 skips. Rush T3 and throw down a bunch of cheap T3 factories, then you can throw all your mass into T3 units. Opponents that stay T2 and eco will likely get steamrolled.

I still feel like the simple solution is a moderate across the board nerf to assault experimentals, or SCU buffs that are so significant that they fix the issue even though you're further increasing the production investment required to get a good T3 formation out.

That second solution is a bit worrisome because of the addition of a quantum gateway to an already expensive production chain... however it does have the side effect of making SCUs a little more viable. Rambos aren't bad, but they aren't exactly commonly used either.

At least with those solutions, you really are only screwing with the very late game.

At the end of the day I don't think I'm alone when I say T3 land went from a pretty good place relative to T4 to to a pretty bad place relative to T4 with the 2018 nerfs. I understand why those nerfs were made and don't have a problem with that, but you have to finish the job. If you nerf T3 to bring it in line with T2 then you also have to nerf T4 to bring it back to where it was with T3.

You realize I am talking support factories right? And actually “nerfing” them in some sense in reduction to talking cost reduction so they are less of an economic drain

@HoujouSatoko said in Points of Imbalance.:

Will that make these top level pros build more than 2 T3 land factories on land maps?

@herzer99 said in Points of Imbalance.:

Because why should players be expected to put a significant percentage of their mass into the game's late game land attack units?

I notice a lot of changes to T1 units this patch. Labs, Mantis, Bombers, Scouts...

I notice some changes to T2 ranged bots in particular.

But apart from the SACUs which has been planned for years, there doesn't appear to be much on the slate for T3/T4.

Very ladder-centric patch, focused on units that are heavily used in ladder.

I am going to try to take a wait and see approach, and just trust them.

Maybe they don't want to make changes to T3/T4 while introducing a major late game change in the form of the SACU changes.

But it is difficult, because these patches only come once every 6 months, and the attitude of too many posters in here is that there is no issue, or that if the issue occurs on team maps it should be ignored.

Just as some anecdotal evidence on what moses is saying.

In 1600 Dual Gap games i've yet to see T3 ever be spammed in significant proportions. Pushing always occurs with Chicken/GC/Megalit, and you might get 1 or 2 lone monkeys that manage to max their vet and become monsters.

Personally, I think T2 is the only stage in the game that provides varied land unit options. T2 has siege, utility, mid range, close range. As it stands unit diversity most to worst goes something like T2>T1>T4>T3

I would prefer to have a longer T2 phas,e, or for T3 insufficiencies to be fixed. As it stands the most diverse T3 army is Aeon. UEF "diversity" is a bit of a joke in that the MML and T3 arty perform the same essential functions, but the arty is almost always better. I would suggest upping the MML range to that of a fatboy.

@moses_the_red
The sacu changes don't combat any of the games problems. instead it just makes combative sacu less useful and this indirectly buffs using SACU as "income" units.

So the changes are fundamentally flawed.

@Psions said in Points of Imbalance.:

EDIT: Wrote up a long admittedly accusatory post and realized that I should wait until the next patch launches and give people the benefit of the doubt. In truth I have no idea whether this issue is being seriously considered or not. More communication from the balance team would help.

I'm just going to take a wait and see approach to this. Perhaps they'll address it.

I doubt that they're looking to sabotage SACUs. I imagine the SACU changes will be very positive for the game.

The part I don't know is whether they'll correct the issues people have been pointing out, but I have a hunch the patch is coming along so we'll know one way or the other before too long.

EDIT again: JaggedAppliance was in Aeolus, and he agreed that assault experimentals need a nerf. I don't know the guy and can't be sure he wasn't trolling or something, but I think he was being straightforward and thinks they need a nerf. 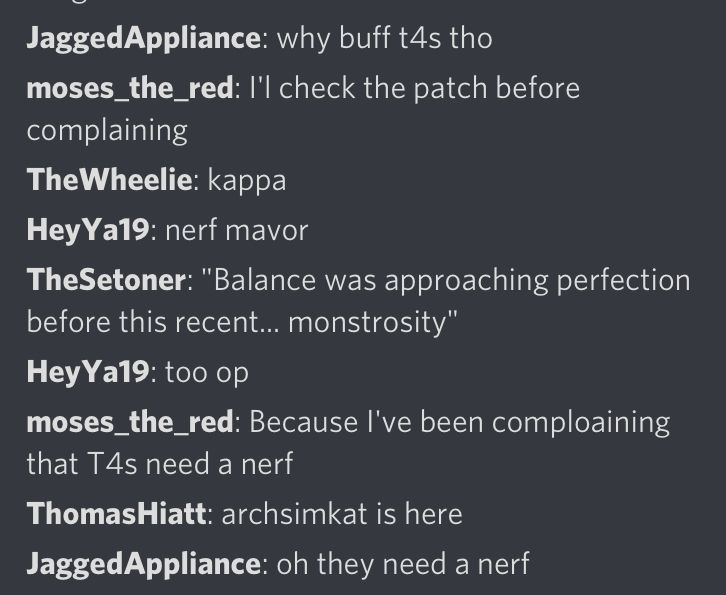 tl;dr
Only T3 factory that better than hives is air

Currently my impression from the community is that T3 land is uninteresting/boring for a plethora of reasons. @advena suggested this is because of support factories but @Azraeel suggested this is because of reclaim being too high for T3. Perhaps support factories could be buffed, but I have no clue. What I am curious about is the Reclaim values.
Why was it decided that Land unit reclaim is about ~81% of the original mass construction cost? Why not be 80% or 50% or 90%, etc... How would the game be impacted if the "percentage of original mass left over as reclaim" was reduced by some arbitrary amount? Would this solve some of the inadequacies of T3 land?
I am very curious to know the reasoning behind setting the wreck mass percentage to ~81%.

He's out of the picture. I'm interested in people who actively work on the game, not some guy who's involvement in the current game is ~0%.
Another point of imbalance. The Percival is now the only T3 land unit to target the ACU over T1/T2 land units.
https://github.com/FAForever/fa/pull/3072
https://github.com/FAForever/fa/pull/3054
Consider making this standard to ALL factions or remove this change.

"Consider making this standard to ALL factions or remove this change."